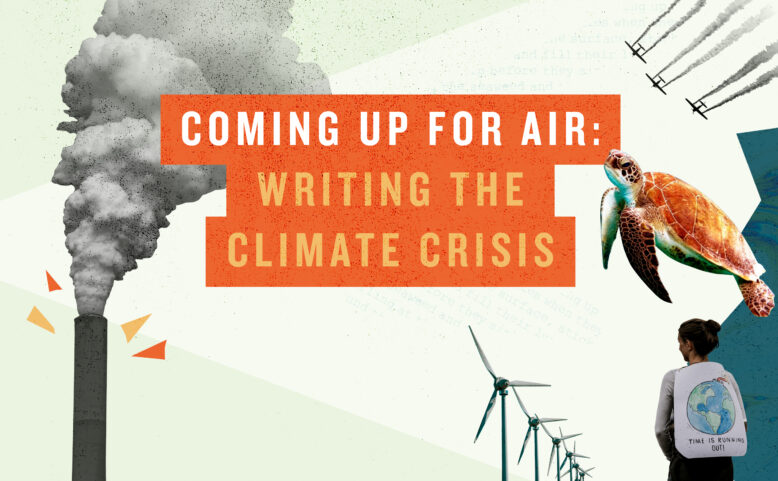 This week we were looking at the Orwell Youth Prize 2022 theme - Coming Up For Air: Writing the Climate Crisis. The prize is open to anyone in school years 8-13 and entrants can write in any form responding to the theme - stories, scripts, poems, essays, articles and even video game design!

We started off by looking at one of the victims of the climate crisis - sea turtles - and writing short pieces imagining ourselves as sea turtles and what our experiences might be, how we might feel, what we might fear and what we might hope for. Here are some of the brilliant responses to 'Imagine you're a sea turtle'!

Swerving between each strand of kelp, swiping aside the otters and urchins. Oh what great fun, floating mindlessly as I please, all well fed. So calm, so serene I am, while the streaks of brown dive down with no mercy at the lawless sea urchins.

I hate being a turtle! There's always people poaching and trying to kill me. My family and I are always endangered and have literally no hope. In my opinion, I don't think I would survive much longer and this all because of these wretched humans.

I am a sea turtle as happy as can be, A sea turtle a majestic king who roams both the land and the sea. Although being so wonderful I have a particular quench, the flying thing who took my brother making me want revenge. One day I saw it an immediately I wanted to attack, This time it looked different and its feathers spelt out plastic bag. He was stronger and better than before and strangled me with these new feathers, Although I lost this fight I am happy to be back with my brother.

The water is so clear swimming in the shallow docks. Watching the ever so small children showing a point of finger at me. as boats go over the top of me.  i vanish into the hollow sand cloud that's brought up. seeing the disappointment in their eyes, me no longer being there.
Slowly taking the tide into the open waters.
Slowly pushing my self onto the sea front,
Settling on the warm sand.

Next, we looked at an extract from Orwell's 'Coming Up For Air', where the main character bites into a sausage and realises it's not really a sausage - it tastes of fish and seems to be made of some rubbery material! The main character laments the fact that these days everything seems to be made of something else, and that the modern world is becoming less and less natural. A key issue in the climate crisis is how to feed the world sustainably. We talked about vegetarianism and veganism and watched some videos from the BBC about possible solutions to feeding the growing population in a more environmentally friendly way, including eating insects (which most people were not keen for!). meat grown in a laboratory, and robot farmers!
Next the young writers were challenged to invent and write about their own 'future food' - which could be something which already exists/which we'd discussed, or something new they were imagining - the weirder the better (Leo's 'Candied Blobfish Sandwiched Between Bark' being a personal favourite!) Here are some of their responses:

Every single supermarket I wander into nowadays is devoid of
actual meat, and it’s infuriating. I know I must sound like such a radical
carnivore, which, for the record, I’m not: I’m all for letting the animals live
their best lives out on whatever gods-forsaken spit of land they’re sticking
the next “Farm Sanctuary” that they’re naming after yet another member of the
Roman pantheon. My issue comes nowhere near the ethics of the situation. My
issue is that it's taking up all the good other stuff to make the faux-meat or
‘beyond meat 3’ or whatever it is now.

The other day, I was wandering through ASDA (I realised 10
minutes after I left my house that I forgot my clubcard, and walking back in
what was honestly horrible weather seemed really unappealing, so sue me) and
they had literally one line of canned beans. I asked one of the automated
help-points about it and the AI said that it was due to increased demand in
lines of vegan meats that use that bean as an ingredient. The AI’s name was
Sharon by the way, and she was lovely. What wasn’t lovely were the feelings
deep inside my soul, which were black as the inside of a supermassive black
hole. That is to say, I Hawking radiated malicious energy for the rest of the time
I was in the store, people parted in front of me as I stalked to the tills with
3 tins of overpriced branded mixed beans in my horrible green ASDA shopping
basket.

YOUR BRAND-NEW BURGERS MADE UP FULLY PLANTS! BASED ON THE
VEGETARIAN MOZZARELLA AND PLANT BURGERS THESE ARE EVEN HEALTHIER AND ARE MORE
ECO-FRIENDLY. YOU CAN GROW ALL THE INGREDIENTS YOURSELF AND MAKE IT IN YOUR OWN
KITCHEN. THEY ARE QUICK AND DELICIOUS AND NOT TIME CONSUMING. MADE OUT OF
VEGETABLES AND HERBS, YOU WILL INSTANTLY FALL IN LOVE WITH THEM.

Recently, scientists have been leading research groups into
the depths of the Mariana Trench, to further explore how the Blobfish lives. We
already know a fair bit about this creature (often deemed the ugliest on
Earth), however some researchers are wondering if this could be a feasible
source of food for the ever growing human population. This is because the
Blobfish has a naturally large body mass, which would get even bigger if we fed
it sushi. This fish can be very easily filleted, and would even be suitable for
at-home preparation, “This is probably the easiest ever fish to fillet, my 8-year
old could do it,” as was stated by Gordon Ramesy.

When store bought, this dish can most often be found frozen,
and is usually a standard size blobfish fillet coated in the remains of glucose
from ocean kelp. Many people describe this food as an “acquired taste,” while
others describe it as “A brilliant culinary invention.”

If you are willing to spend a bit more money, it is not
uncommon to find it sandwiched between two pieces of bark. (Ecologists have
recently realised that many trees are decaying, and no one is eating their
bark.)

A warning to readers, this food is not fully suitable for
dogs.