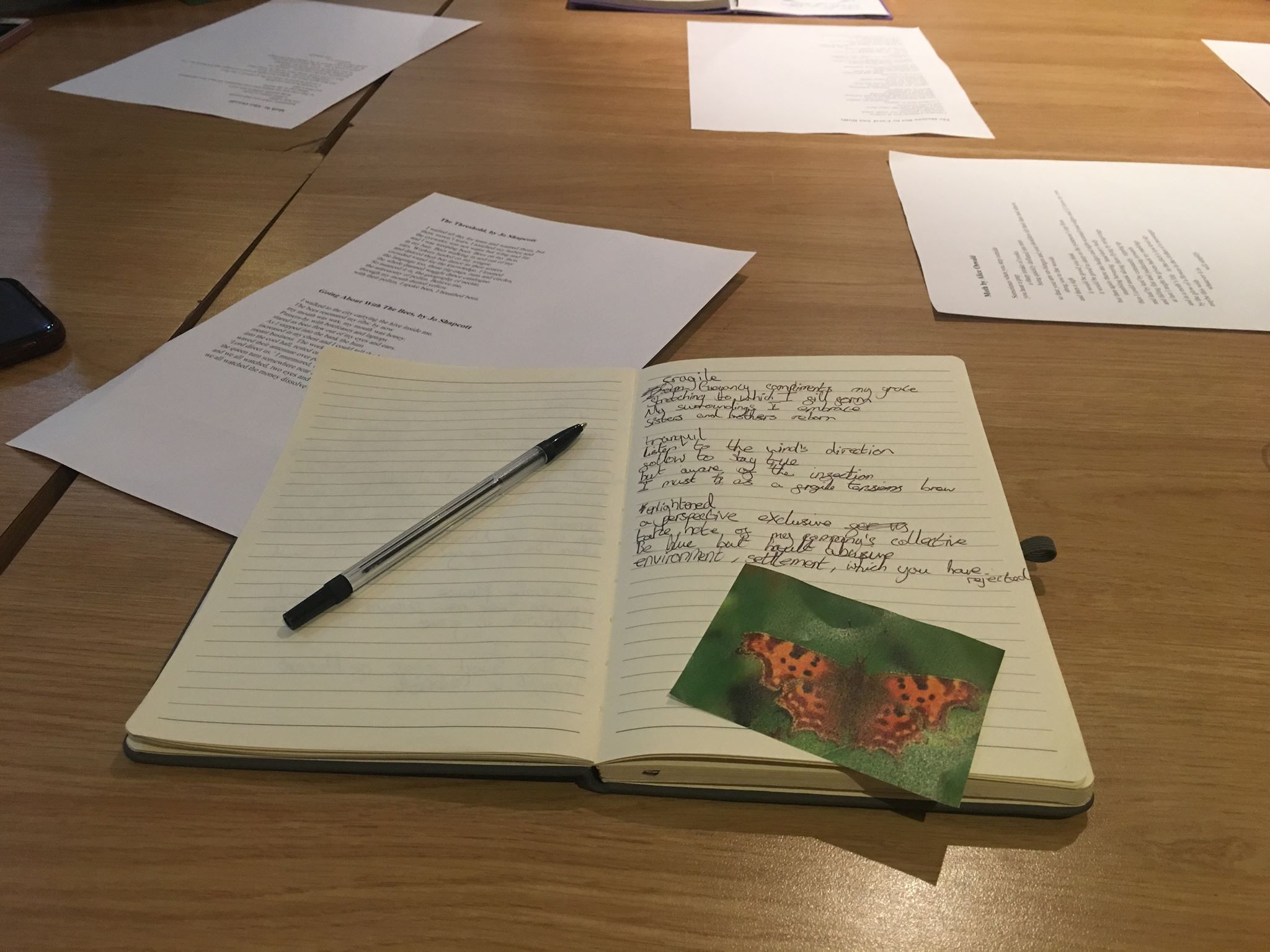 With the aim of introducing environmental themes into our workshops, and following in the footsteps of poet laureate Carol Ann Duffy, this week's session was based around insect poetry.

To provide the writers with inspiration, we read through poems such as Still Life - Mark Pajak, and Thinnings - Zaffar Kanial. By picking these poems apart and discussing their creative techniques, the writers were able to understand different ways of approaching 'insects' as a theme, such as in a hospital fruit bowl.

To create our own poems, we then all selected a picture of an insect at random, and interviewed it. Questions included: Which three words would you use to describe yourself? What is your dream job?

From this, Izzy created a butterfly who looks good in hats, while Milly discovered a bee who gets a thrill from scaring people. The purpose of this activity is to help create/build a character from your insect, and see things from their perspective.

Haiku's were next on the agenda, about an insect of their choice. After explaining syllables in poetry, all the writers, including those who were attempting them for the first time, wrote brilliant haikus!

Going back to their interviews, the writers then wrote a full length poem, which explored the life and feelings of insects.

One writer wrote a lovely poem about a blue butterfly:

but they don't see what real life is.

I'm afraid of them and much more.

but yet again they don't see my 'graceful' wings flapping,

as I zoom drastically,

getting away from a rogue child.

fluttering around in the springtime breeze,

but once more they don't see my thoughts inside

as I come to die,

but they don't realise what they do themselves,

Then they start over again.

With new members joining the group, we started the session by introducing ourselves and our favourite insects (makes a difference to favourite piece of literature!).

When analysing insect poetry with the older group, we looked more deeply at the meaning behind certain words and how topics such as climate change, money, and politics are portrayed through poetry. Poems included: Moth - Alice Oswald, The Threshold - Jo Shapcott, and The Human Bee - Carol Ann Duffy.

After interviewing their chosen insects, the writers also pondered on how the world must look to an insect, in terms of both size and environmental development.

Tina created an insects who's "whistle notes are so high only dogs can hear them", while Thomas wrote about a moth with a fear of lamps. (The lamp theme was brilliantly consistent throughout the workshop!)

James's poem about a butterfly read:

Stretching to which I fill form

My surroundings I embrace

Listen to the wind's direction

but aware of the infection

I must, as fragile tensions brew

Take note of my companies collective

Be blue but halt abusive

Environment, settlement, which you have rejected.