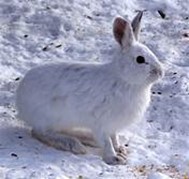 This week, we were thinking about how animals and plants respond and react to winter. We started by thinking about how they might change in winter - e.g. snow hares turn white rather than brown in winter to match the snow, swallows and other birds fly south to the warmer climes of Africa, many animals develop thicker fur, many trees lose their leaves. Inspired by this, the young writers chose one of these things to write from the perspective of, in either a poem or a story, and how this thing knows that it's winter - using the line 'I know it's winter when' to start them off if they chose to. See if you can guess what is being written about in the examples below:

I come home from hunting in the cold of the night. It seems to be getting colder these days! My friends stay the night and let me go out hunting instead! I just think they’re lazy some days but maybe they have a point. It’s much warmer in our cave and not going to lie, I’d much rather stay there. Food is getting a bit scarce as well. True as some of them blend in with the snow it’s not getting any easier. Even the foxes have changed! More fluffy and a bit more selective about what they eat. Maybe I should do that. I snuggle into the warmth of the cave for the morning as the winter sun comes up. Not much warmth stays in the cave so we all huddle together if we’re not asleep. Sleep isn’t the best thing to do right now, well that’s what I think anyway.

My eyes become more dreary as the cold gets to me. Everyone yawns and stretches out their wings. I’m glad they’re not covered in ice. I know that my local hedgehog friend is doing something ‘hibernating’. Sleeping through the whole month doesn’t sound appealing. Maybe I should take a leaf out of their book. I wrap my wings around my body to keep the warmth in for now. Goodbye December. Bring on spring.

The same I stay
Year by year and
season after season,
Just as prickly,
My sap ever so sickly.

Under my roots
In the soil, mice
And hamsters slumber,
In my leaves and branches
Nests lie
Where birds
Migrating can rest the night.

I know it is winter when,
it rains and it rains again and again,
it's awfully distressing when leaves blow all around the place,
just when I think it is enough it repeatedly smacks my face,
I can barely fly the leaves I have to avoid,
when I get home, I find that it is destroyed,
It is always cold never sunny I wish I had some clothes,
winter is an unwanted burden everybody knows!

In the second half of the workshop, we looked at the (arguably!) best John Lewis Christmas advert, the Bear and the Hare! The Bear has never experienced Christmas because he has always hibernated through it - until the Hare gives him an alarm clock to wake him up on Christmas Day! Inspired by this, the young writers thought about either the animal/plant they had written about before, or something new, and how they might respond to the strange things humans do to celebrate winter festivals, such as Christmas, New Year, Diwali, or Hanukkah. For example, a fir tree might be very surprised to suddenly find itself brought inside and covered in tinsel - birds might be confused by carol singers - rabbits and squirrels might be bewildered by candles suddenly appearing, etc.

Here are some examples from the group:

HELLO! PECK PECK! THIS IS ME! BIRDIE! It is really hard being a bird on every December 31. I don't get why, but people like shooting anchors which explode in the sky. One almost shot me so I dropped my waste on some ones head. It was a good Idea as thy got angry and threw a croissant at me. I just flew away.  I have a theory. Hoomans, or whatever they are called, are going to explode this land right below me. I'm lucky I'll be in the air, though I need to be careful of-  (BANG)  AAAHHH! WILL YOU KEEP THAT NOISE DOWN! EXPLOSIONS ON YOUR LAND! STOP INVADING ME! Ok, so I'm just going to fly to Africa, first I'll have to go through Winchester. Well, I feel like stealing some ones croissant right now, I'll do that then, see ya!  (Birdie looks down and find that another anchor is coming his way)

GULP. If I don't make it out alive, tell my mother, whoever she is, that I stole the croissants from the cookie jar.

Wait! Why am I being decorated in shiny objetcs? This is unacceptable . What's going on? I hate December- the cold frosty weather and everything about this month. People just use me for Christmas but the worst thing is that they can't even hear me like i'm invisible or something. Oh why does it have to happen to me? I just don't get what these humans are doing by decorating me." Hello, what are you doing?'' Great these people don't even know if i'm talking

Whatever are you doing,
Why is it me you are Sawing?
Ropes and strings
Around my many arms,
Lights on some,
Baubles on others.
Never before Has this happened,
Dragged into a house
From forest to folklorist,
Dressed in ornaments housing boxed presents.
Very rude I consider it,
As never did I permit,
To be torn out of my
Soily mound,
Only to be found
Beside a living room
Couch.