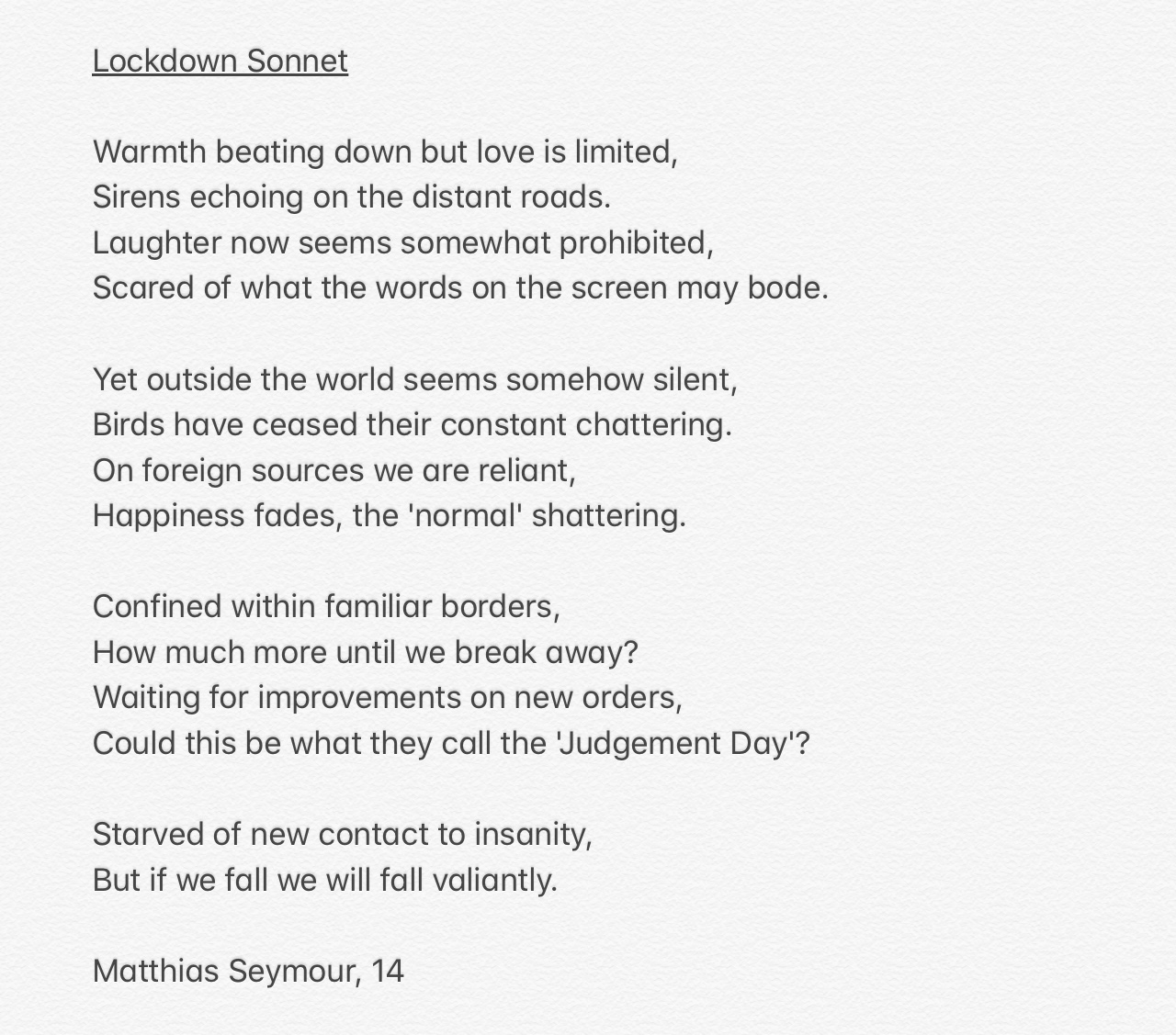 Group one- 31 in attendance

The Mayflower Young Writers are back! Despite the current circumstances we appreciate how important it is for us all to stay connected and stay creative, and so this week we have taken to ‘Zoom’ to do just that.

Although this new platform will of course take some getting used to, we love the new opportunities that technology offers- as it allowed us to connect with over 50 young writers from the comfort of our homes! We reached many new (virtual) faces and heard some amazing pieces that were created during the session.

Group one focused on the awareness of location, as we are undeniably taking more notice of our surroundings during lockdown. The young writers were asked to think of two different numbers between 1 and 9, and then shown a grid full of a variety of places. From a mysterious lighthouse to a throne room in a great palace- the Young Writers used their chosen numbers to pick just one inspiring venue on the grid of locations.

With this in mind, the writers were asked to describe their given location, creating a sense of atmosphere and really utilising the powers of descriptive vocabulary. The descriptions were then read aloud to the other members of the group and constructive criticism was given in the chat section, allowing the writers a chance to get some feedback on their pieces.

Expanding on this, the group was then asked to envisage and write about a character in first person, who is stuck in the place they had previously described. The writers could think about why they are stuck there, whether physically or mentally, and how this made them feel. From this the Writers created a monologue that internalised the true thoughts and feelings of their constructed protagonists.

Again, the monologues were shared with the group and feedback was given. The Young Writers embodied everything from a tiger trapped in a circus to someone stuck in a lighthouse, imagining the fears and thoughts they might encounter.

The second group payed homage to the #ShareYourShakespeare initiative in celebration of Shakespeare’s 465th birthday. We asked the question “How well do you know Shakespeare?” in an interactive quiz, covering everything from his life to his greatest work.

The Young Writers then tackled a Shakespearean themed poetry activity, titled the “The last shall be the first”. The group was encouraged to think of a number between 10 and 15 along with their favourite line of poetry. This line of poetry would then be written on the corresponding line of their piece of paper. For example if they chose 11 “to be or not to be” (or their preferred line of poetry) would be written on the 11th line of paper.

The idea is that the poem can either be written backwards, starting with the final line, or the poem can be steered so that it ends on the chosen line of poetry. This created some really beautiful pieces, quoting poems from William Wordsworth and Christina Rossetti.

Drawing on this, the Writers were asked to follow a traditional sonnet structure but write a poem about their experiences during lockdown. Matthias shared his piece with the group which beautifully symbolises contemporary fears but with a traditional and well recognised structure.

Warmth beating down but love is limited,

Sirens echoing on the distant roads.

Scared of what the words on the screen may bode.

Yet outside the world seems somehow silent,

Birds have ceased their constant chattering.

On foreign sources we are reliant,

How much more until we break away?

Waiting for improvements on new orders,

Could this be what they call the 'Judgement Day'?

But if we fall we will fall valiantly.

A reminder that any work written during the sessions (or in your free time!)can be sent to youngwriters@artfulscribe.co.uk so we can share and create an anthology full of amazing original pieces. It can be prose/poetry or any other structure under 1000 words.

We Look forward to seeing more of you again next week, even if it is virtually!