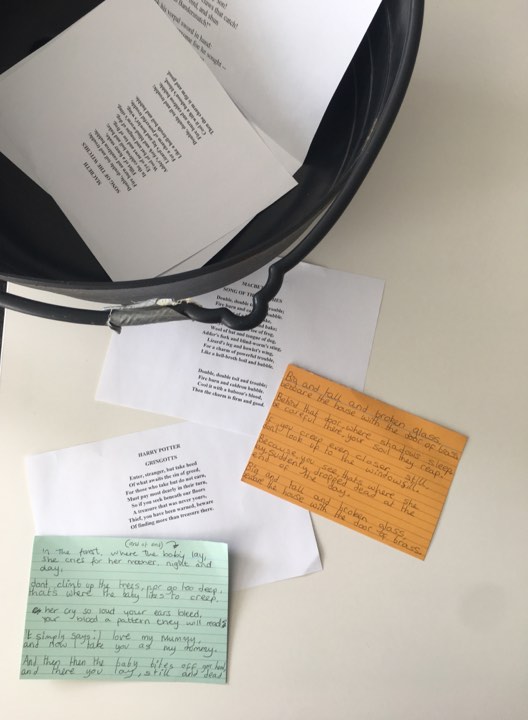 This week, the young writers experimented with writing fantastical poetry, including charms, spells, and curses.

To kick things off we all looked at poems that fall under this category (which they picked from a cauldron), and discussed what creative tools were used to form them. Examples included: Harry Potter - Gringotts, Lewis Carroll - The Jabberwocky, and Macbeth - Song of the Witches.

Then, using these examples, the young writers all wrote their own spells. Some were kind charms that granted wishes, while others were evil spells cast upon evil people!

Behind that door where shadows sleep,
be careful there, your soul they reap.

If you creep even closer still,
don't look up to the windowsill,

because, you see, that's where she lay,
suddenly dropped dead at the end of day.

After this, the writers read Roald Dahl's Revolting Rhymes, e.g. Red Riding Hood, Three Little Pigs, and Snow White. We all discussed what made these stories different to the ones we've previously heard, then going on to create alternative plots in groups of 4.

Similar to the younger group, the writers read our fantasy poetry and discussed what techniques were used in the writing of them - for example, made-up language. Poems included: Camille Ralphs - Pendle Hill, Lewis Carroll - The Jabberwocky, and The Tempest - Caliban and Prospero.

After this, they wrote their own curses and spells, some even instructional.

When your dreams overlap on waking hours, and waking hours become heavy haze,
that is when you know.

When grim shadows haunt the silky corners of your eye, hounds and men and foxes,
that is when you know.

Sly and shy and sickly and swell, your body moves as a magnet does to another and
that is when you know.

Locks and leather and look and long, movements come from your chest to your arms,
that is when you know.

Forget suggestions and thoughts altogether for now you are part of something greater,
now you almost know.

Let your body and your mind dissolve, as pills to water you are to your surroundings.
There you see it?
Now you know.

After this, the writers read fairy tales that were written from a feminist perspective, such as Carol Ann Duffy - Medusa, and Eurydice.

Taking inspiration from these, they then wrote similar poems/tales that went against the societal norms. One student wrote of Burger Queen, while another wrote of a Rapunzel who wanted to live in the tower in order to stop being pestered.