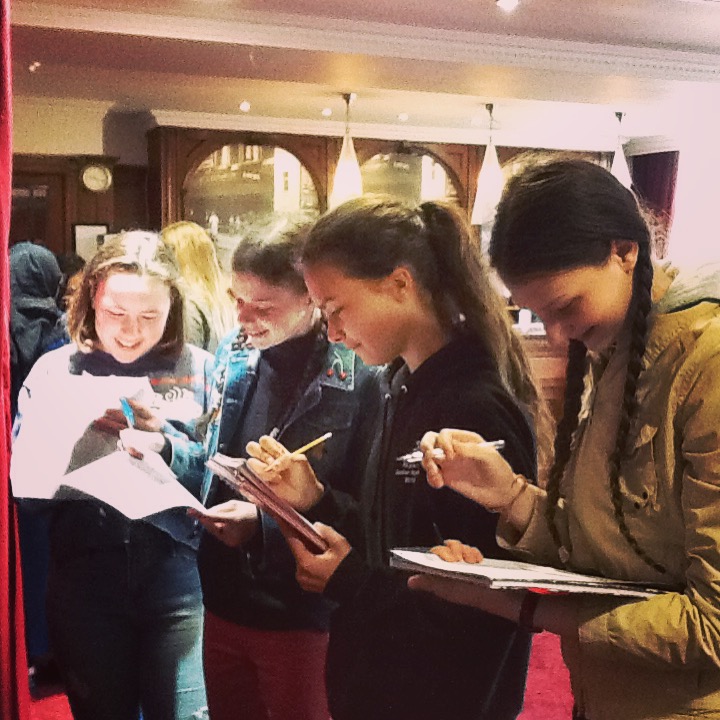 It may be almost a hundred years since the Roaring Twenties, but the young writers really brought them to life in our Saturday session this week.

The 11-14-year-olds were ‘like moths among the whisperings’ at Gatsby’s party, as they filled out an activity sheet, sharing rumours about their mysterious host and learning more about the extravagant setting in the process. The scene set, attention shifted to fashion, with the young writers scrutinising the many pictures of 1920s dresses that were passed around the table.

Inspired by all these prompts, everyone was ready to put pen to paper! As we’d toured the Mayflower last week, it was the perfect place to set a 1920s scene. There was much enthusiasm for the suggestion that the characters were going to watch ‘Shriek’ the Musical and somewhere along the writing process, someone decided that the Lord Mayor would fall out of one of the theatre boxes…

The results of the twenty-minute writing exercise took us back in time, with ladies heading to the dress circle holding ‘handkerchiefs over their pale powdered faces’ and a man up in the Gods complaining that he’d paid three and six for his seat and could ‘hardly see three and six inches!’. Needless to say, listening to the stories was great fun!

1920s American slang served as inspiration for the 15-18-year-olds, who worked words like ‘fire alarm’, ‘potato’ and ‘tomato’ into their stories - and, no, there was nothing in there about a vegetarian curry gone wrong. There was trouble in the air, though, for a man who decided to visit the theatre with both his wife and his mistress!

For the second writing exercise, each member of the group had to draw pieces of paper with a character, an object, a place and an activity that they had to weave into their stories. With characters such as rum runners and places such as churches, some of the combinations the young writers had to work with made for some very creative thinking. One of the stories, set in a fast car, had a young man smuggling alcohol to the local speakeasy while musing ‘Apparently it is dangerous to drive whilst drunk, but if I followed that rule, I wouldn’t have a job!’. Another writer had her character sneak a bottle of champagne into a church to share with the priest before they cleaned the place out, the prompt requiring them to steal from the rich to give to the poor…

Unitl next week, when we keep the 1920s alive with more activities and many more entertaining stories, write on!