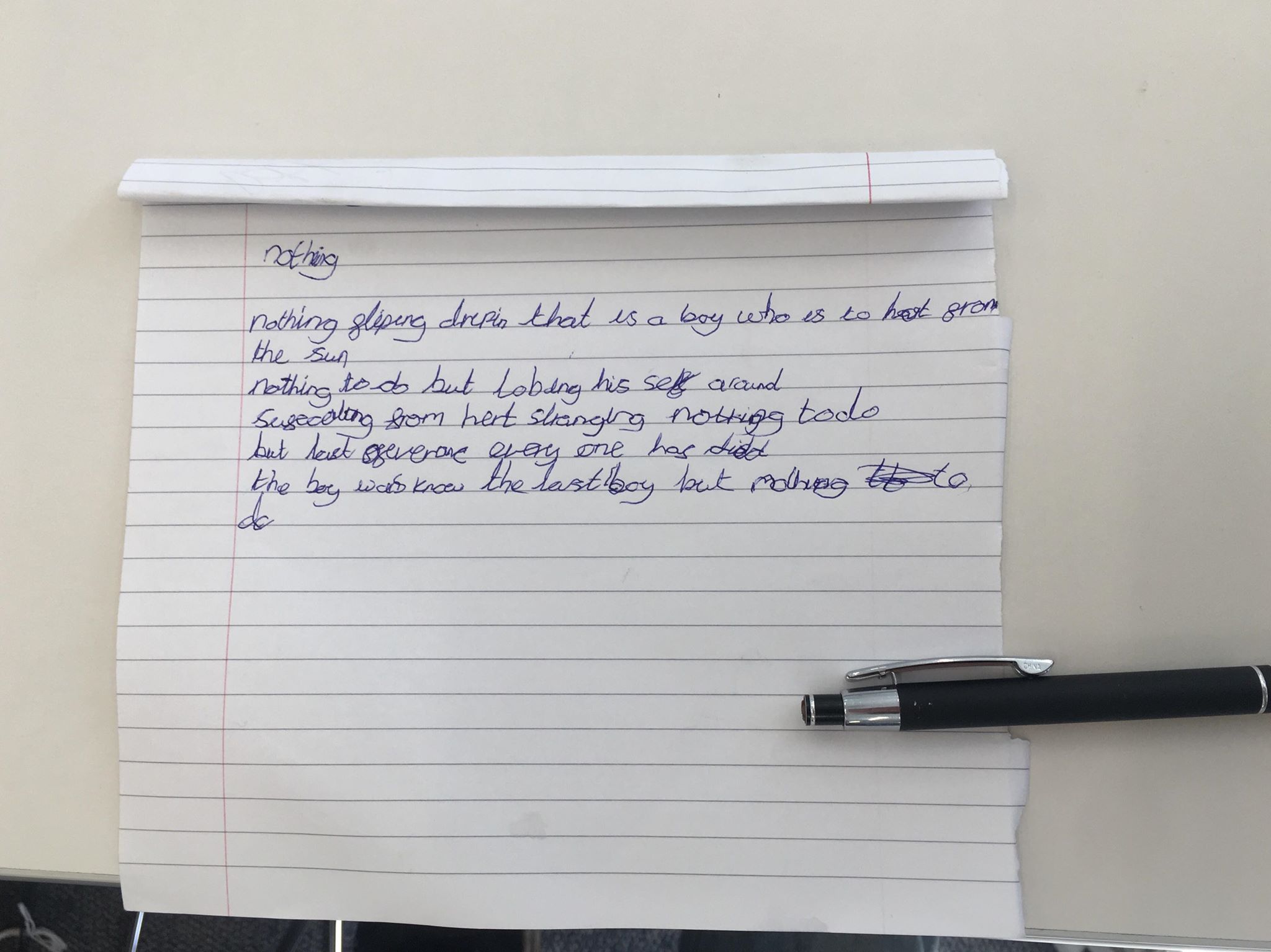 Working along the lines of climate change again, the young writers read Simon Armitage's poem The Last Snowman. The poem explores the idea of the last ever snowman melting - a metaphor for the rising heat on earth.

Using this as inspiration, the writers wrote their own 'the last...' poem.

To get their creative minds going, Tabby read out a random line of her own writing, and the writers had to come up with a corresponding line that rhymed. The writers were brilliant at creating interesting and well-thought out replies. Examples of this are:

Writers: and we can make a change, with less fuels and car shares.

After this, the writers went back to their 'the last...' poems, all choosing different topics: the last lioness, the last sunrise, the last ocean, etc.

in the darkest hour

and willing time away.

nothing to cool her

only the rising black sea

stuck to her neck

glued by the sweat

liquor of the reddening sun.

She thought of her life

playing before her eyes

and fell with her lowering head.

After this, we explored what Spoken Word is.

Kate Tempest - 'Don't Fall In' was our first example of spoken word played over music, and demonstrated how this can be closely linked to rap.

To contrast this, we then watched Raymond Anthrobis - 'The First Time I Wore Hearing Aids'. His approach to spoken word is much slower and clearer, with more of a story-telling style.

Some writers enjoyed spoken word, while others did not. But it was decided that we would explore it further!

To explore all the different styles of spoken word, and how they compare to page poetry, we read through / watched many poems and discussed what made them unique to one another.

As well as Kate Tempest, we watched Raymond Anthrobis perform a few poems, including 'Ode To My Fathers Dementia'. We then read other climate change inspired poems including 'Exhibition' by Jackie Kay, and compared why it against Raymond's work, and discussed why it works better on page than spoken.

We also read 'Still Life With Sea Pinks And High Tides' by Martha Dooley, 'For Rashan Charles' by Raymond Anthrobis, and 'The Question' by Theo Dorgan.

To follow this on, the writers each created a poem that was inspired by any we had read/watched, while trying to stick to the theme of climate change.

To loosen up their minds more, we then did a minute of Stream of Consciousness before continuing on with their poems.

Hannah suggested that we watch Dear Future Generations: Sorry, on Youtube, as it's a viral sensation that puts our future into perspective in lament terms. Again, it was interesting to discuss what it was that made this spoken word piece so relatable, and the young writers decided that it was the use of easy language and vivid imagery.

Continuing on with their poems, no one wanted to share. However, with a little more encouragement, I believe we'll have some exciting spoken word artists in the group!