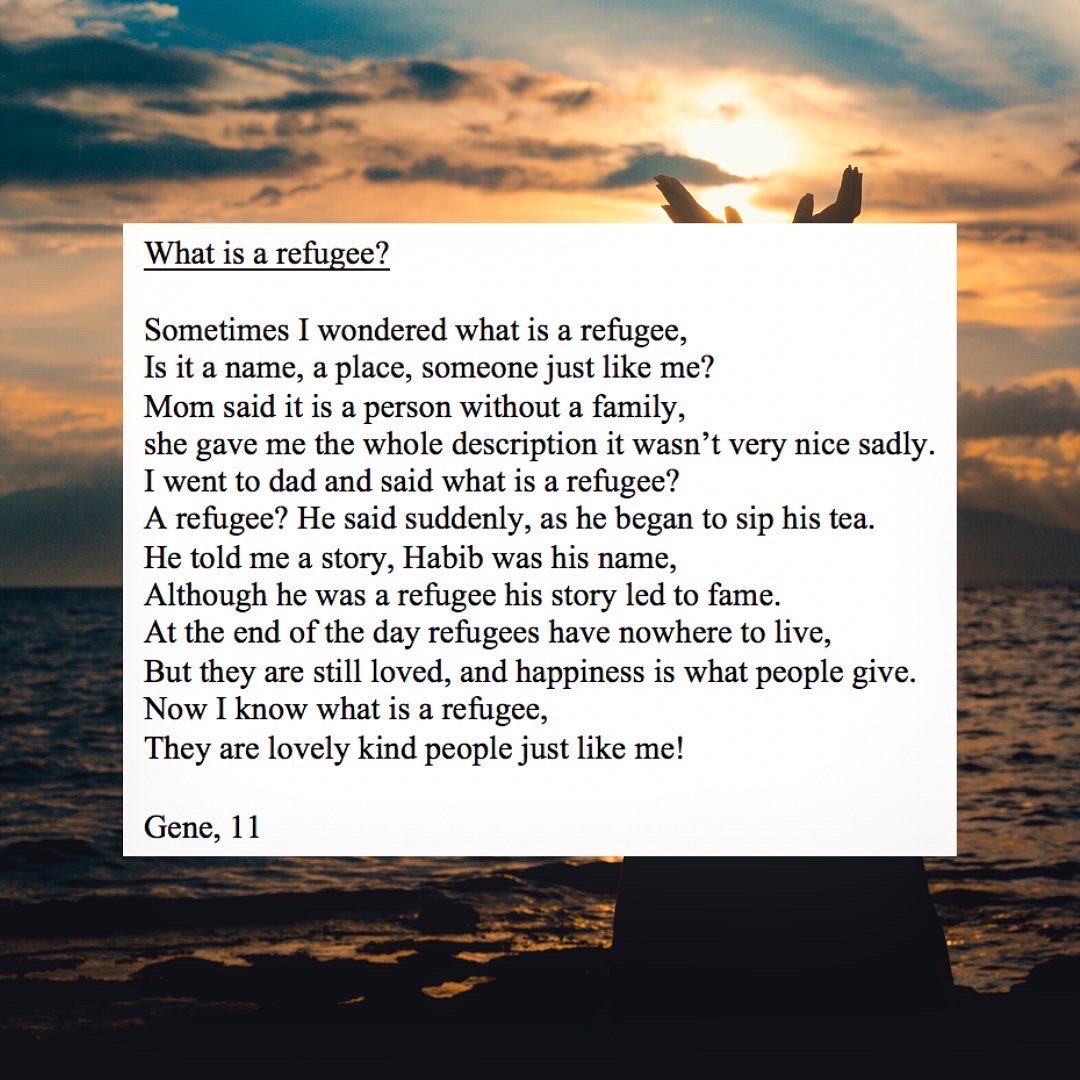 Are you aware of the link between Rita Ora, Albert Einstein, Judith Kerr and Freddie Mercury?

The answer may surprise many of you, as they are all in fact refugees. Each public figure has fled for safety and freedom to other countries at some point in their lives.

To commemorate #refugeeweek2020 and as the session conveniently fell on #worldrefugeeday, the Young Writers created some poignant pieces that attempted to understand the hardships that these individuals face. Initially we as a group aimed to define a refugee and broaden our understanding, as we looked at the inspiring story of Habib who came to the UK from Afghanistan just aged 14.

The video ( https://m.youtube.com/watch?v=_WdprHcOuJU&feature=emb_title ) was the main inspiration for the task set as our Young Writers were given the choice of the following activities-

It could focus on his life now, the life he left behind, his emotions (fears, hopes etc.), the journey he has been on. You may wish to relate it to a time when you have felt lost, lonely, isolated etc.

Write a letter starting “Dear Habib”, sharing your thoughts and responses to engaging with his story. You might wish to express empathy, inspiration, admiration, or concern for example.

Imagine you are Habib and write a diary entry after seeing the finished animation for the first time. What are you feeling and why? What are your hopes for the animation?

Create a short story using the animation as inspiration- you may wish to choose just one scene or perhaps one relationship and expand on the material given to you in the animation.

Create an interview outline for meeting Habib. What would you want to ask and why? Keep to a maximum of eight questions and think carefully about the order. Consider how closed or open your questions are.

Write a review of the animation ‘Dear Habib’ for your peers that helps young people like you to understand what the film is about, why it was made, what creative choices were made, how it might help with the issues involved, why they should watch it.

Below are some amazing poems that were created by our Young Writers using the brief above.

Along the choppy seas I rode for months and months on end,

But even though all of that nobody wanted to be my friend,

Sitting in a hostel for days and days on end,

And a woman fought for me to get a house,

She was now my friend,

The government declined it and a lawyer fought on my behalf,

And i got an appeal that got me into my house,

And now when I look back I can laugh.

My neighbour came round

Through death and destruction

But through all that they went

Only one then arrived.

If there is anything you need

My door is open to you

For a while my new neighbour said no

But one day he he looked through.

Finally I got the letter

That decided my fate

It had taken a while

But it was here at any rate.

I smiled and I sighed

For my wish had come true

After years of uncertainty

I was going to school.

What is a refugee?

Sometimes I wondered what is a refugee,

Is it a name, a place, someone just like me?

Mom said it is a person without a family,

she gave me the whole description it wasn’t very nice sadly.

I went to dad and said what is a refugee?

A refugee? He said suddenly, as he began to sip his tea.

He told me a story, Habib was his name,

Although he was a refugee his story led to fame.

At the end of the day refugees have nowhere to live,

But they are still loved, and happiness is what people give.

Now I know what is a refugee,

Home. I don’t know what this means anymore.

Is it the place I come from,

With the screams and crashes and hungry flames?

The place where my mother danced when she thought no-one saw,

Where my father told me stories and my sister held me when I felt scared?

Or is home the place I am now,

The place I came to search for freedom,

Where I feel a new terror, but still have hope,

Where I don’t know the language, the money, the people,

But I can learn and grow with the promise of safety.

Or is home a feeling, an object?

Is it a feeling of safety, or belonging?

Is it memories of joy and echoes of laughter?

Or is it the photographs and letters saved from a collapsed house?

Is it the place you risked your life to get to?

Or is it your roots, your family?

Is it stepping on to land and breathing in the smokeless air,

After hours cramped in the dark, wondering if you’ll ever make it?

Or is it the bag you clutch on to like a shield,

Filled with the only things that are yours?

Maybe home is both or neither.

Maybe home is a mix of past and present,

That makes us who we are.

The second exercise ‘voicing the silence’ asked the Young Writers to place themselves in the position of some of the other characters in the short film and give them a voice by writing a series of short pieces imagining what they might be saying.

The ‘Break room’ feature was then used during our zoom call, splitting the participants into much smaller groups through which discussions could be had and pieces could be read aloud. This new feature allowed a much more intimate and friendly experience as the Writers could chat to one another and offer constructive feedback verbally.

The second group took a very similar stance as the following prompts were provided and more poignant pieces were created.

What items would you take with you?

The tanker was dark, as dark as…

What will you miss the most?

How does it feel to arrive somewhere new?

Write a metaphor to describe the feeling of being somewhere new.

Make a list of the differences you have seen in this new country.

The Young Writers were able to explore and empathise with the experiences of refugees arriving in the UK, attempting to internalise their potential thoughts and feelings.

A reminder that the competition for designing the cover of our anthology is still open, submissions can be emailed to youngwriters@artfulscribe.co.uk along with any written work created during the sessions!

Until next week, stay safe and keep writing. 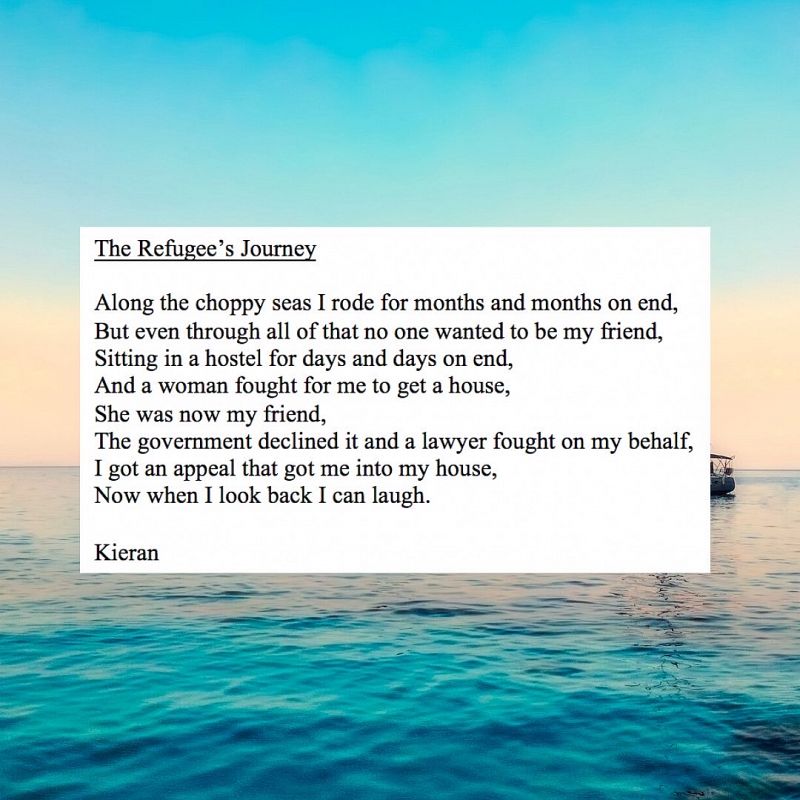