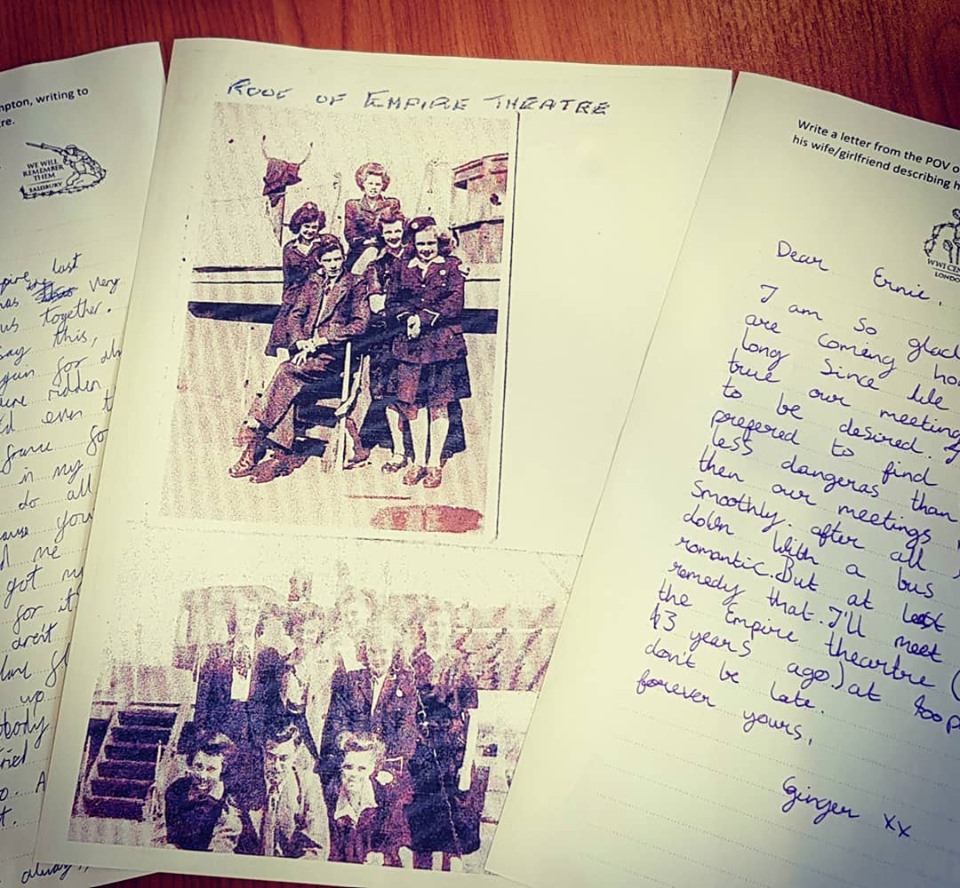 Love. Love stories. Love letters…how entertaining it was to watch the young writers’ reactions to the these words!

The session was inspired by a couple who had met while working at the Empire Theatre in the 1940s. As we’ve been working with materials from the archives, Dorothy and her husband Dennis Heard’s story seemed like a great starting point for a writing activity about life and love in the 1940s.

In the 11-14s group, this was not as simple as reading love stories and writing love letters in response. ‘Love’ was ‘ewww!’, ‘yuck!’ or just plain ‘boring’ as far as most of the group was concerned. There was much resistance to reading love stories, and when the young writers began storyboarding in pairs, suicide pacts, shootings and accidents seemed to make their way into these stories. Jerry and Greta (Hayley and Milly’s characters) both face death because Jerry has deserted and Greta plots revenge. Ginger and Ernie nearly get run over by a bus, but our young writers Tabitha and Tom spare them in the end and send Ernie off to war and Ginger pining to be reunited with him outside the Empire. We were relieved to read that at least Annie (written by Katie) is a romantic wondering ‘if there is a moon where you are’ as her love, Fred (Naeema’s character), has promised that he will think of her by moonlight.

The 15-18s were, thankfully, much more receptive to the love stories we read. It was quite inspiring for us all to learn about some of the roles that women played during the war, with jobs as varied as crane operators, welders and bus drivers. Sophie and Sam storyboarded Thomas and Elizabeth, childhood sweethearts who met when Elizabeth saved Thomas’ ‘beloved hound from the well’. Cassie, Hari and Katie had us riveted as their story unfolded in a trio of letters. Fran, who loves Jake ‘more than there are stars’ believes that he is on the battlefields of Europe, from where he writes to her of how his ‘longing seems compounded by every shell and blast that breaks that silence that falls like a suffocating gag over the battlefield at night’. However, we learn that he is not at war at all, but in the arms of a young woman called Daisy…

Love stories may not have been to everyone’s taste, but the letters that the young writers produced were definitely creative, with enough detail and language to take us back to the 1940s, albeit in mostly tragic circumstances.

Next week we will be filming for the archives. Until then, write on!