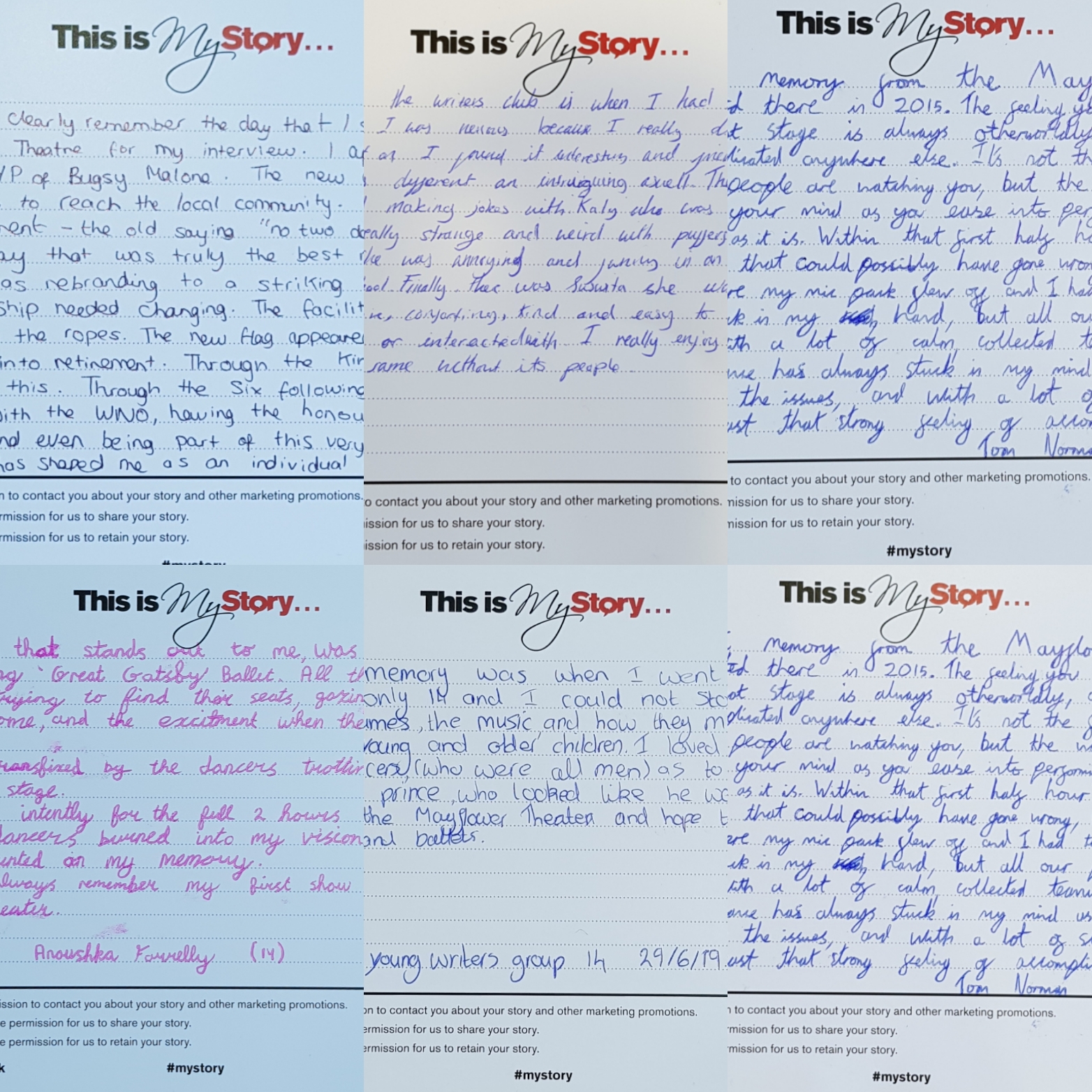 In 2016, the Mayflower Theatre started the My Story project to collect and share the local community's memories of the theatre. There is an online archive of these stories, some memories dating back to the early years of the theatre, and a My Story film of interviews conducted during the project that brings the theatre’s rich history to life. In the spirit of the project, the young writers, many of whom have been coming to the theatre since they were very little, wrote and filmed their favourite memory of the Mayflower this session.

Here are some of these memories:

My favourite memory was finding out about Fred the Ghost during our first tour of the theatre. So many pieces and conspiracy theories were sparked from our discovery. Bea, 13

The Mayflower was where I first discovered the joys of ballet. ‘Coppelia’, ‘Alice in Wonderland’, ‘Swan Lake’. But by far the most magical was ‘Sleeping Beauty’. I must have been about 8 at the time. I think the magic for me was in the music. Katie, 11

My favourite memory from the Mayflower was the first time I acted there in 2015. The feeling you get from stepping into that stage is always otherworldly, and it's a feeling that can't be replicated anywhere else. Tom, 13

My favourite memory was when I went to see ‘The Trocks’. I couldn't stop laughing. I liked the costumes, the music and how they made ballet enjoyable for young and older children. I lived the small fights between the dancers (who were all men) as to who could dance with the prince, who looked like he was from another world. Lucy, 14

The first performance that springs to mind in the wonderful Mayflower Theatre has to be ‘Wicked’. I remember as the singing rang out, I was carried away by the story, and the way it explained the background to one of my favourite tales. On the way home, I was constantly singing the songs, much to the annoyance of my family. Tabatha, 14

The Memory that stands out to me was going to see the amazing ‘Great Gatsby’ ballet. All the chattering of people trying to find their seat, having at the beautiful dome, and the excitement when the lovely velvet curtain rose. I was transfixed by the dancers trotting and prancing around the stage. Anoushka, 13

For many years I have been coming to the Mayflower, watching countless shows and taking part in the young writers’ group. But the memory that sticks in my head was when I saw ‘Wicked’ for my birthday. The way the story came to life before the audience and when it ended, how it felt like walking up from a dream. Hayley, 13

One of my best memories of the Mayflower was 'The Lion King'. I was much younger and remember eating Dolly Mixtures as I watched the play in awe. The songs were my favourite part. They transported me to Africa, watching a new lion Prince born on Pride Rock, his jealous uncle Scar plotting to take the throne, Simba and Nala falling in love and a new king crowned. From that moment on, I feel in love with lions. Libby, 12

My favourite memory is when I started the writers club in early 2019. I admit that I was nervous because I really dislike being social, but as the day went on I found it interesting and friendly for me to talk a bit. Everyone was different and intriguing as well. Our teacher Susmita was really comforting, kind and easy to understand. Naeema, 11

I belong to the Mayflower Young Writers group and as a member I have special access to performances. I have seen many inspirational shows, but although it's very hard to decide, my favourite was probably ‘The Magic Flute’ opera by Mozart. I especially remember the conductor, when his head bobbed up and down in time to the music, the light caught his shiny bald spot and sent a beacon of light into ‘the gods’. I recall giggling so furiously that the lady behind me politely asked me to be quiet... Milly, 13

My first and best memory of the Mayflower Theatre was ‘The Great Gatsby’. I watched in awe as the performance played its course with splendid precision. I thought Gatsby getting shot was a bit dramatic, but other than that I thoroughly enjoyed the ballet. Julian, 11

I have been coming to the Mayflower for as long as I can remember. I have attended many different events here, but one of my more recent and vivid memories is seeing a comedy about bank robbers in March, 2019. It was a very funny play and I was amazed to see how they managed to build the floor of the bank on the wall. I will definitely return to see more shows and I come every week to attend the young writers’ group. (It's a cult, really, but we call it a group because of legal requirements.) Onur, 13

I have enjoyed coming to Young Writers for more than a year because of the fun variety of activities. One session we may be writing or final draft for our anthology and the next on an interesting tour of Tudor House and Gardens. One of my favourite memories was of the Mayflower Theatre tour because we learnt many weird and cool facts. Another is playing consequences because we always end up with hilarious sentences which contain phantasmagorical, Alex or both. Rohini, 12

There was one day that was truly the best memory of my time here. Mayflower was rebranding to a striking red and the front flag of her majestic ship needed changing. The facilities manager showed me the ropes. The new flag appeared with the old branded flag going into retirement. Through the kindness of this one man - I still own this. Sam, 16

I have participated in several youth productions with the Mayflower Theatre throughout my teenage years, including ‘Guys and Dolls’ and ‘Les Misérables’, Yet my fondest memories of the Mayflower will always be my participation in the Young Writers’ group. Not only did this put me in contact with many people that I am proud to call friends, but also boosted my confidence in writing, both creative and formal that will be invaluable in later life. Hari, 16

Despite regularly visiting the theatre since I was 10-years-old when I saw ‘Robinson Crusoe’ the pantomime, one of my favourite memories was performing in the Mayflower Theatre Gala. The stage was crowded with West End performers and the Youth Theatre who had performed ‘Les Misérables’, and the rest of us were lining the aisles of the stalls. The standing ovation, the confetti canons, holding the end position as the crowd goes wild. These memories will stay with me forever. Sophie, 17

My favourite Mayflower memory was when I went on a school trip to watch ‘Robinson Crusoe’ in 2014. It was a wonderfully hilarious show and I was entranced by the vibrant costuming, effects and songs. But the defining moment of that night was when I was invited on stage by Lesley Joseph (playing the fairy godmother) to help in the traditional small child helps save the day section of the pantomime. It was honestly one of the best days of my life, and ever since stepping on stage all those years ago I have never wanted to leave. Katie, 16

Next week we are learning how to write musicals! Until then, write on!