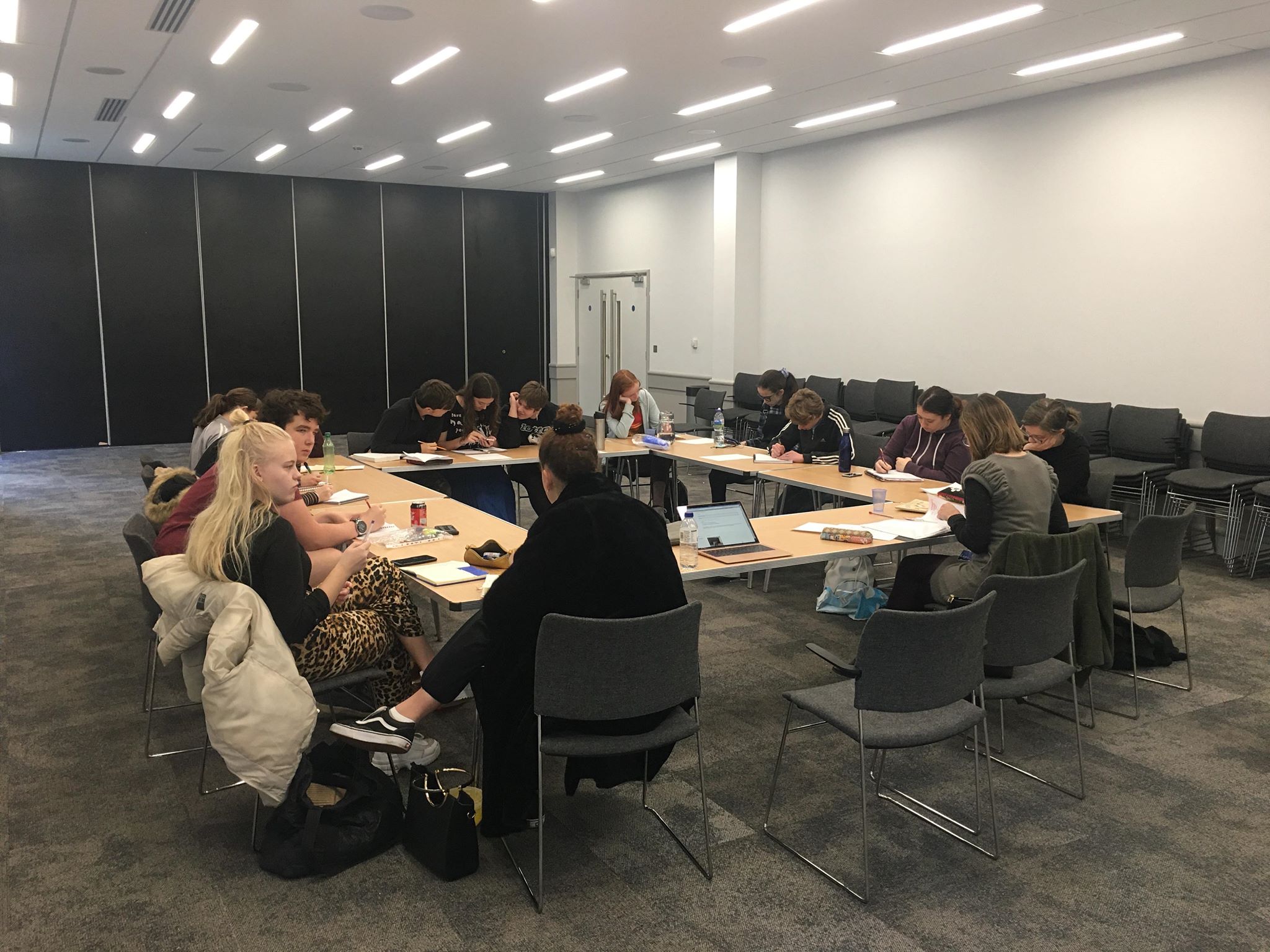 To introduce the topic of this week, as well as the new faces joining us, we asked the person next to us 'what was the last thing you saw in the theatre?' A vast variety of answers came back, ranging from Aladdin in Wimborne to Hamilton at the West End. Lucky for some!

To get the pens flowing, the young writers wrote a conversation between two characters (A and B), in which A wants something, and B is stopping them from having it.

A: I want something to love.

B: No, you're not getting one.

B: Far too hairy!

A: It's very cute

Then, the young writer's had to re-write the conflict but this time taking place during bonfire night. Therefore, the characters would be cold, and the environment would be dark. Can the writers show these new elements through the dialogue alone? Yes!

Then, the young writers had to re-write AGAIN, but this time, every time Tabby yelled "BANG" (the sound of a firework), characters A and B have to pause, and then continue the conversation after.

A: You are in my way

[A waves at B until he takes his headphones off]

B: Can't you stop pestering me?

[B takes headphones off]

B: Cant be bothered to move

A: I am freezing. Just move!

B: Nope. I'm not cold, I could stay here all night.

A: Mooooove! Now! Or I will turn your music off.

[B begins to sing]

A: I will take your headphones!

A: I will cut your headphones!

B: I hope that lands on someone.

A: What... what? You psychopathic human! Can I please get to my-

After a short break, the young writers then added a character C to their scripts, to see how this could change the scene. For this, we weren't focussing on the script structure or layout, more the use of dialogue between characters.

To read these out, the writers were put into pairs to share their work. When reading it, they had to say 2 things that they liked about the other person's script. This gained some lovely feedback including Bea's opening lines which instantly throw the reader into the middle of a scene.

After this, if they wanted to, the writers could perform their scripts while wearing a variety of Tabby's hats and scarves (to give the proper bonfire night aesthetic!). Lily's included fantastic dad jokes and comments of condescending boomers, while Sam's involved toxic masculinity and a very dramatic death - he fell to the floor!

See pictures for glimpses of their performances!

What makes something dramatic? Well, the young writers believe that a good plot is needed, one that builds tension and suspense. As well as this, an interesting set, passionate actors and powerful physicality are also needed! Lily believes that a current topic e.g. Brexit helps to build drama as not only is it relatable, but it will also one day be historic! George raised the brilliant point of creating empathy with the reader/viewer. If they don't care about what happens, how will the tension be built?!

As a warm up exercise, the young writers had to think about something concrete that they personally want by the end of the day, e.g. a large hot chocolate, and then think about why they may not be able to have it, e.g. no hot chocolate powder.

Similar to the younger group, they then had to turn this into a script with characters A and B. Again, we are not focussing on stage directions or setting, simply just the methods of dialogue between the characters e.g. persuasion.

After discussing the political background of bonfire night, A is then made into a character which is trying to persuade B not to light the barrels in parliament, without A telling B why not. The young writers discussed what dialogue techniques could be used, they said: coercion, puppy eyes, pleading, bribing, threatening, distraction, flattery, and the element of surprise.

A: Oh sir, there's a grand festival commencing at noon on the Thames

B: What nonsense, I cannot go to some festival, parliament require me

A: Oh sir you work so tirelessly hard, you myst have a day off and a good knees up. Angela will be there.

B: These women can wait for me, the king needs me and I must serve him

A: But it is only one day, think of all the wine and the great feast

[B lets himself be persuaded for a minute]

B: The food does sound tempting, but i'm sorry I have to decline

A: Many years ago, witches were burnt outside parliament to to his majesties desire. And one year a witch was burnt to a crisp but I have heard she comes back to haunt parliament every full moon

B: And told is of a full moon

B: You're right, we need to go to the festival at once

A: Good decision sir, I would hate you to interact with spirits!

Again, the young writers are asked to come up with a situation where A wants something and B won't let them have it, but to extend the script and make it more in-depth. They could use characters they may already be working on outside of the sessions, or come up with something new, and it can be in any genre they like.

Due to only Charlotte wanting to read her work, instead of performing the scripts, the young writers were given the last 5 minutes of the session to continue writing!

Charlotte wrote a script between Jenny and Mr. Dover, where Mr. Dover is persuading Jenny not to jump from a building roof. She uses techniques of persuasion through dialogue, as well as reassurance of their friendship. However, the script ends with a massive twist of Jenny pushing Mr Dover off the roof!! Charlotte left us all reeling for more! 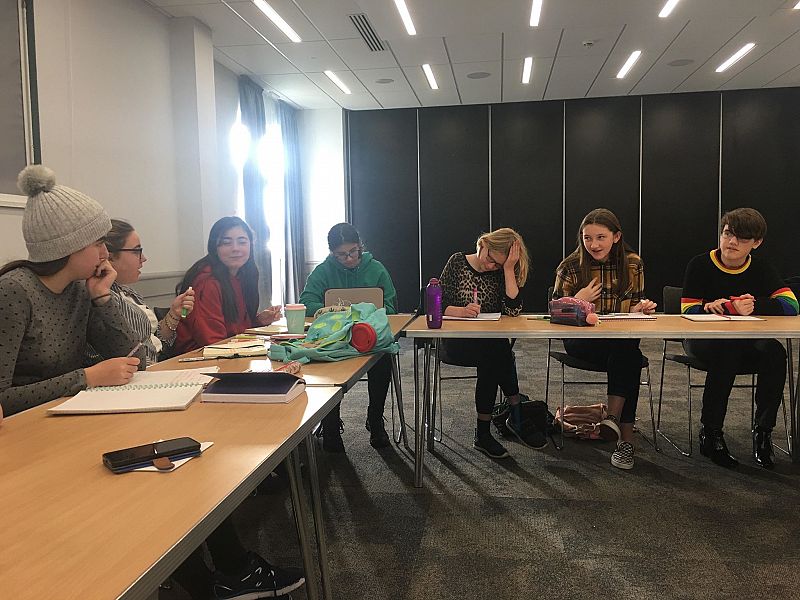 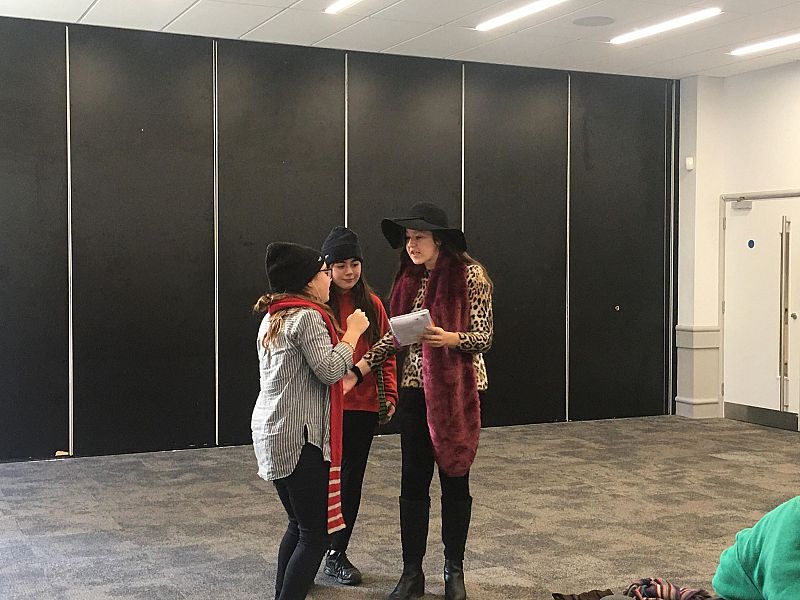