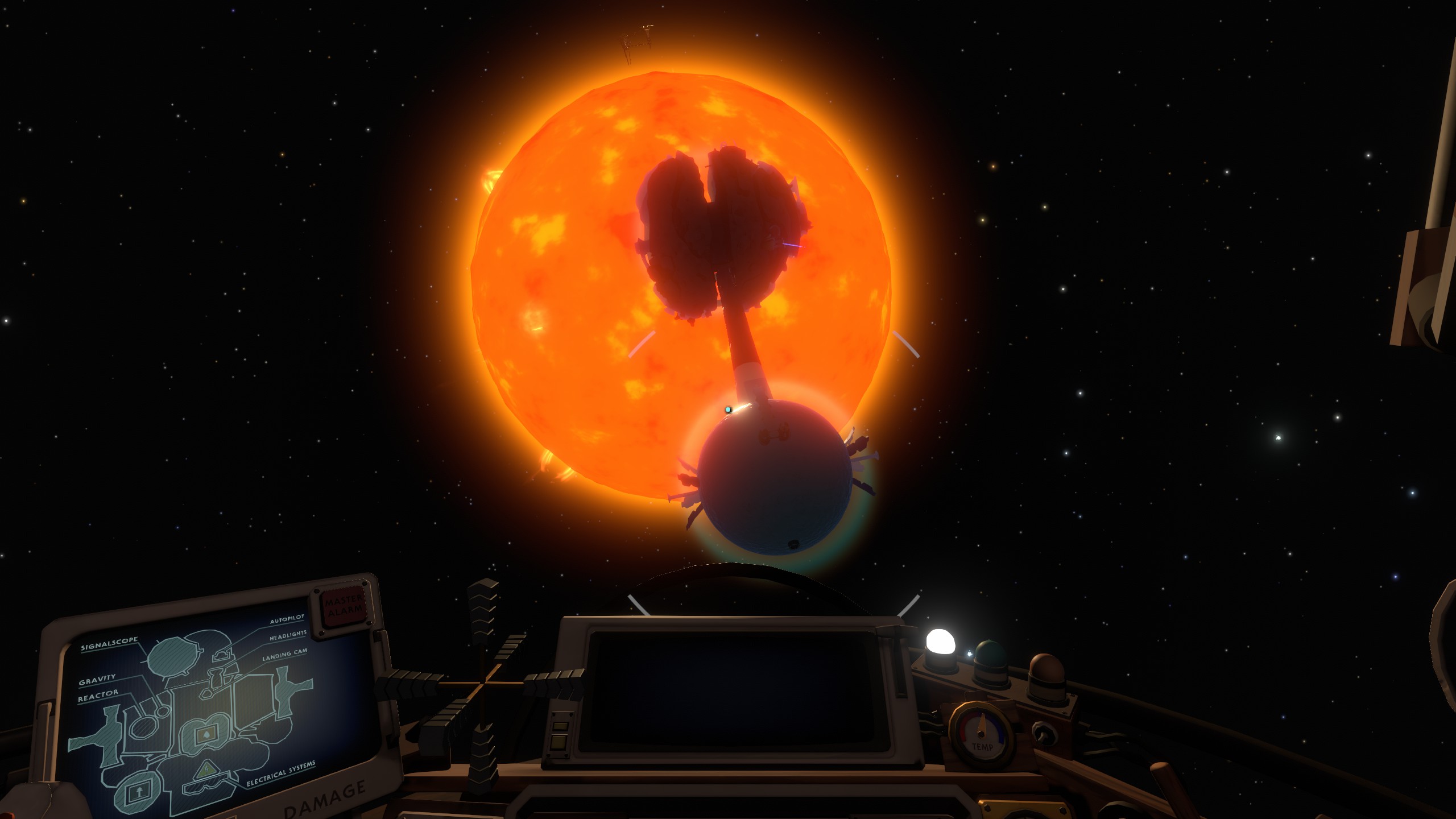 This week we look to the stars for inspiration, we talk about our weeks as if they were an object floating through space. A dwarf planet not quite big enough to be a real planet, a big sign saying “hire me” flying from planet to planet, often filled with asteroids, big gold vinyl records that they shot into space to communicate with aliens, a planet, very green and lush and blue so even from far away it hurts to look at it but you can’t look away. Katie tells us a story about her last visit to an observatory: “Earlier this year I was in New Zealand, I went to an observatory, pre lockdown, we knew the lockdown was coming, we knew we had four days. They were thinking about cancelling the tour because it was too cloudy to see anything. They let us look up through the telescope, but we couldn’t see anything, but as I looked through the lens suddenly the clouds parted and you could see the entire Milky Way.” A week filled with the feeling of “Thinking you wouldn’t get to see something” but then “the clouds part.”

After our weekly check in Antosh hands the group over to me and I have prepared something that I hope captures at least a little bit of the magic of the clouds parting. Our prompt for today is a visual one, but not from art or photography or film, this week we’re looking at a video game: Outer Wilds. Outer Wilds is a video game set in a little diorama-like solar system filled with mysterious worlds in various states of flux. Today I’m taking the group to the Hourglass Twins, two planets that orbit one another close to the surface of the sun. Ash Twin is a seemingly empty desert planet, a big ball of sand in the sky, whilst Ember Twin is a complicated network of caves and caverns on a mountainous rocky world dotted with specks of greenery here and there, small signs of life. We watch as these two worlds circle one another until Ash Twin reaches a point in its orbit where suddenly the sand starts to pour down, pulled by the gravity of Ember Twin into its hollowed out terrain. And with that the Hourglass has begun to tick down.

I very easily could have pre-recorded myself playing this, or found a clip of someone exploring these worlds online. I chose not to, because whilst you can share a piece of art or a text and engage with something which exists as a static piece of work and draw inspiration from it, in a video game everything that’s happening is happening right now. I am facilitating a session with our group, but I am also piloting my ship, desperately trying not to crash, existing as an active participant within that art, beaming that footage live to our writers to observe and watch unfold as it happens. There are stakes to this. I really could accidentally mess up my trajectory and go careening into the sun. I could just as easily misjudge my velocity and flatten myself against these worlds. I discuss the possibility of this with Antosh whilst planning the session and we agree that whatever happens, if I crash, if we reach the end and what I want to show everyone, that is our story. As careful as I can be in guiding this I didn’t know where we would end, balancing my role as a facilitator and a pilot, a cameraman of sorts pointing our group to what I want them to see in the world.

We watch the Hourglass Twins. We watch as Ember Twin is slowly filled with sand, a core slowly filling and filling until its deep canyons become flat terrain, and the bridges and caves, the glimpses of a city within, are buried. As Ember Twin is filled Ash Twin is revealing more and more of itself. Big glowing spires, structures of unknown purpose, signs of a civilisation perhaps lost. And as I orbit these worlds we see the heat from the sun start to lash against the cockpit of my ship from behind. As I zoom out from the worlds it looks as if the sun is getting bigger and… redder? I set my ship down by the campfire of a fellow explorer, built within a small collection of trees. I roast a marshmallow in the fire. I eat it. And then I watch the sun expand until it stops, implodes, seemingly melting in on itself and then... the explosion as the blue pulse of a supernova grows closer and closer. We watch the journey we just took flash before our eyes, and I wake up again where I began, looking up at the stars, the sun once again sitting in the sky.

Outer Wilds is a video game where you watch the solar system end every 22 minutes. The story of this game is told in the intricacy of its loops and repetitions, the moments it keeps bringing us back to. I wanted to see what our group saw in this loop. Our writers see a relationship where one takes more from it than the other, they see one planet sustaining the other, water pouring from one to the other, making the trees grow, until one takes more than it needs, they see the big sun in the background as a child, the two planets as parents, constantly arguing, until the sun explodes setting the house on fire, with the parents still inside. Our writers bring varied personifications and interpretations of these worlds and their relationship to one another to their writing, all journeying in different directions.

I’ll leave you with the thoughts of one of our writers. “Can we ever start brand new? Tomorrow is a new day, but is it truly a new day if you remember the sun exploding yesterday?” 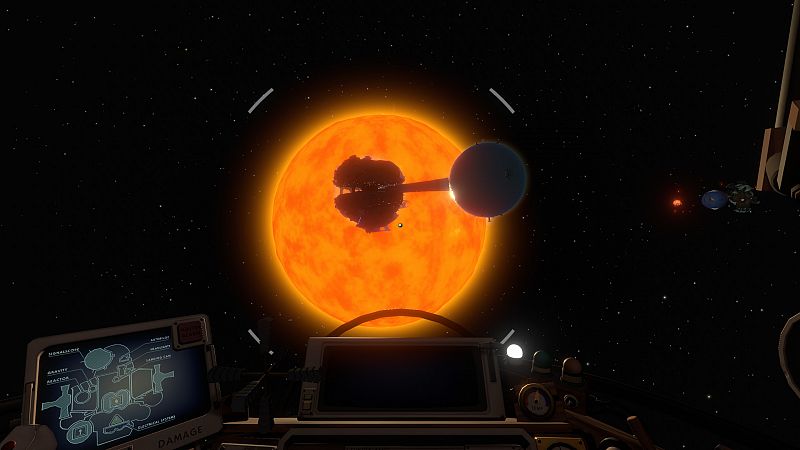 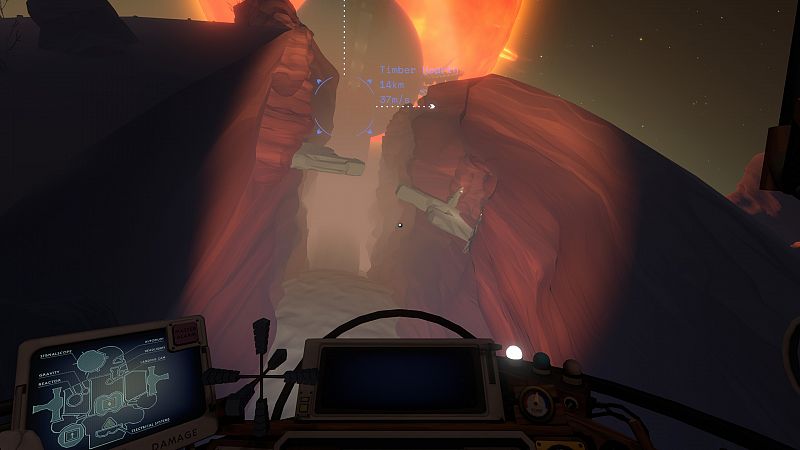 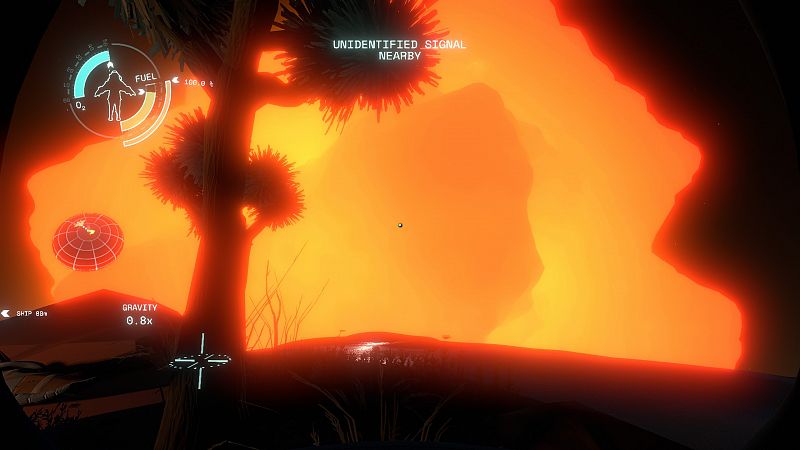 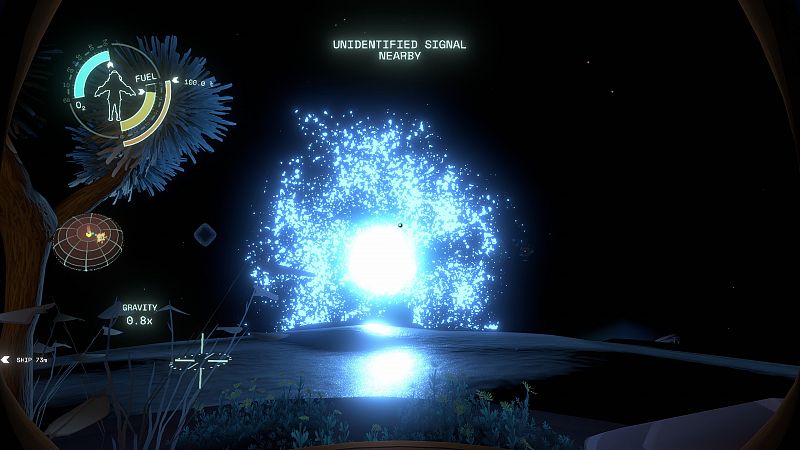 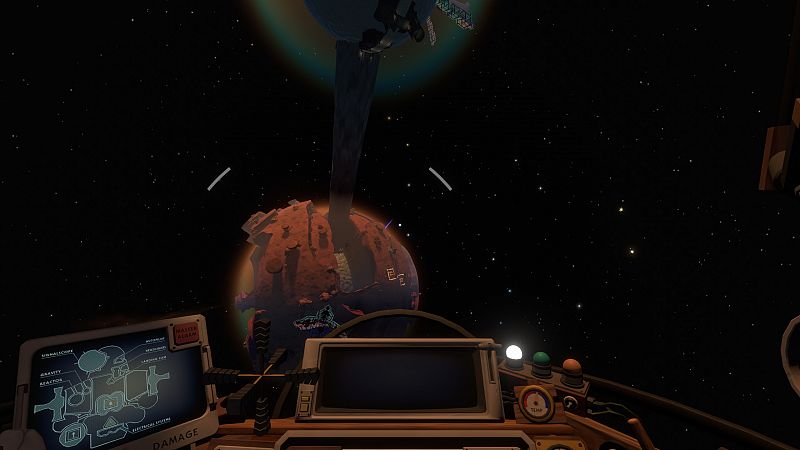 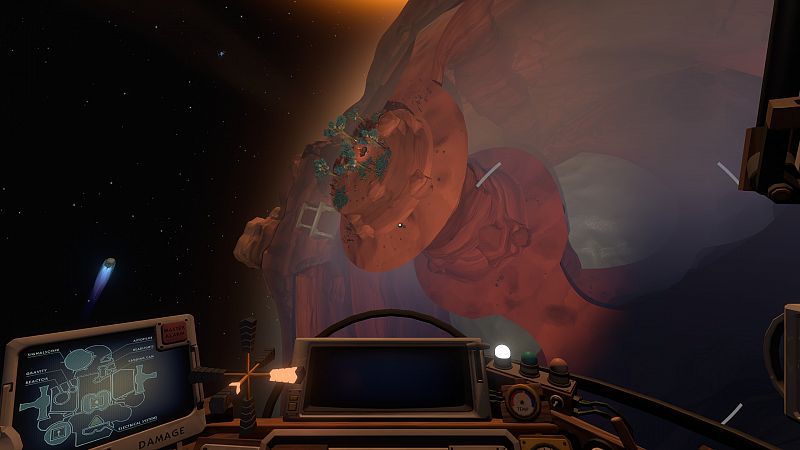 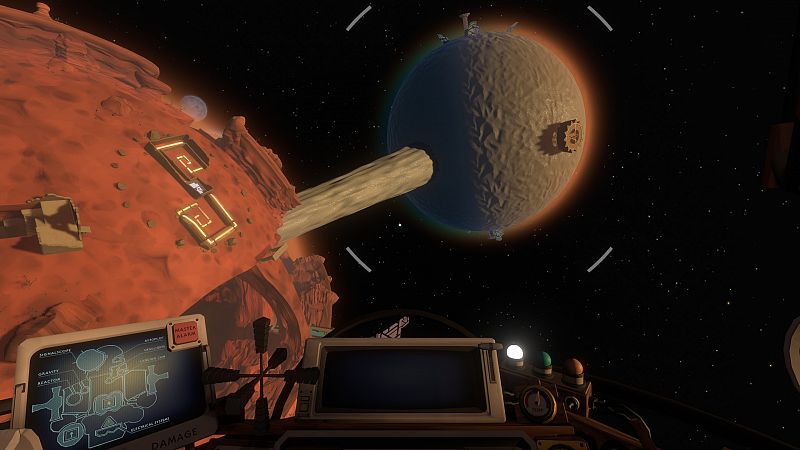 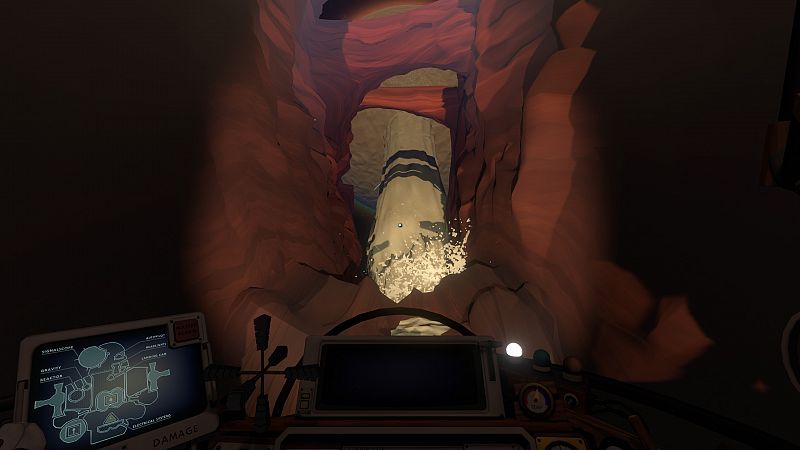 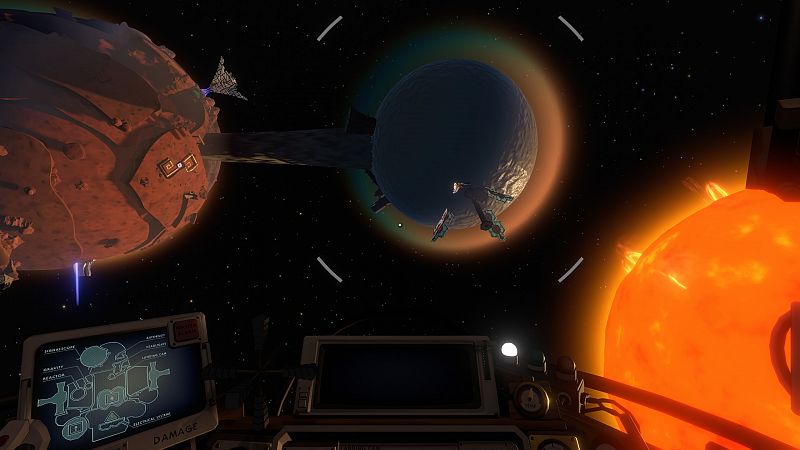 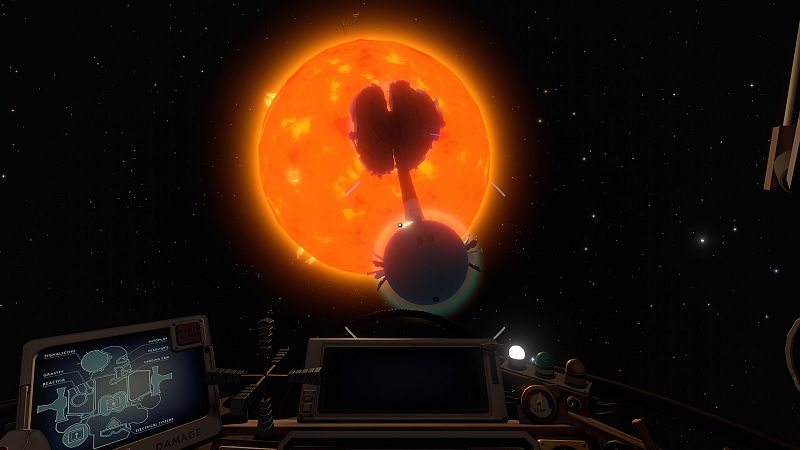