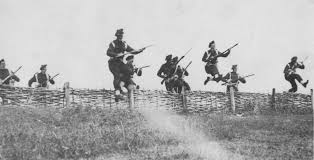 This is the safety-catch, which is always released
With an easy flick of the thumb. And please do not let me
See anyone using his finger. You can do it quite easy
If you have any strength in your thumb. The blossoms
Are fragile and motionless, never letting anyone see
Any of them using their finger.

They call it easing the Spring: it is perfectly easy
If you have any strength in your thumb: like the bolt,
And the breech, and the cocking-piece, and the point of balance,
Which in our case we have not got; and the almond-blossom
Silent in all of the gardens and the bees going backwards and forwards,
For today we have naming of parts.

Our group will often discuss writing in terms of concrete detail, will look for conflict or tension, and from there discuss resolution or transformation. ‘The Naming of Parts’ is a useful poem in this regard, each stanza is a six line engine for change.

It is a poem that requires a little context. One of our creative touchstones is to look for ‘unity’ in time, place and action (if a reader can see these three elements working together the text will feel more grounded), but ‘The Naming of Parts’ is a voice-in-the-head poem, and there's a fluidity between a ‘heard’ voice and a ‘daydreaming’ voice which some readers might find challenging. In short, it's not immediately apparent where the poem is taking place, when, or what's happening.

So, Henry Reed's poem was written in 1942, during the Second World War, and reflects the experience of a new recruit being educated about his rifle;

Today we have naming of parts. Yesterday,

We had daily cleaning. And tomorrow morning,
We shall have what to do after firing….

The voice of the instructor is dry and humourless, contrasting sharply with the recruit`s daydream;

Japonica/ Glistens like coral in all of the neighbouring gardens…

In the first five lines of each stanza we have the juxtaposition of the instructor’s dry, adjective-free lesson, and the recruit’s glistening daydream. This creates tension, friction, and energy. Then the final line of the stanza, ‘And today we have naming of parts’ repeats a line of instruction, but its meaning is now transformed via the recruit’s daydream. This structure is repeated in each stanza: thesis, antithesis, synthesis.

The poem as a whole reflects its parts. The opening line is used again as the closing line. This technique of returning ‘home’ at the end of an adventure, the same but transformed, is a mainstay of many storytelling traditions.

To model a writing exercise I blu-tacked six A1 sheets to the wall and marked them alternately ‘instruction’ and ‘daydream’.

We then chose an everyday activity; the kind of thing one does on auto-pilot. In our example it was washing-up. Next, leaving the daydream to one side we described the washing-up process by bullet pointing the steps. This was a very funny chat. Pulling apart an automatic process made it new and interesting, especially with the debate about order and nuance - when, for example, do you put on the rubber gloves, if indeed you do?

Once we had the process outlined we went back and imagined ‘jumping off’ points. We placed ourselves as the instructor, and also as the recruit wishing they were anywhere else. One of the most rewarding leaps was from the instruction to wash a knife ‘point down’ to the daydream of being a ballerina, on tiptoe, points down.

On reflection, the exercise worked well and we produced good work. The poem offered itself up to analysis easily, although the fluidity of voice was a stumbling block (I got around this to some extent with highlighters, showing the three parts of each stanza in a different colour). The modelled exercise was fun. It turns out that pulling apart a process and leaping into the gaps is a pretty playful way to spend a couple of hours.