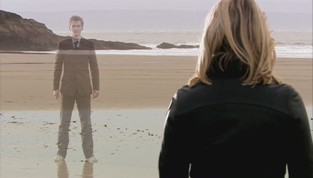 This week, we were thinking about endings. After talking about what makes a good ending, and some of our favourite endings from books and films (including E.T., The Wizard of Oz, The Hunger Games, and Dead Poets Society), we focused on the final scene of Toy Story 3 in the younger group, and both Toy Story 3 and Casablanca in the older group, to write a scene where two characters were saying goodbye to each other - but neither one of them was allowed to use the word 'goodbye'. Instead, the young writers had to think about what might be going on in the subtext of the scene, beneath the surface, and how they could show what their characters were really feeling, even if they might not express these emotions out loud, or might try to cover them up with humour/pretending they didn't really care.

Here are some examples from Jasmine and Annie:

the SkyKids stood on the Edge, the crowd of younger kids
behind them was cheering. this would be the last time they touched ground for
another 4 months. in this world, you were a child forever, able to fly. you
spent about 13 years learning everything you could...and then, it was time to
jump off the Edge and fly to the next world. Jamie looked back at his younger
friends, and nodded slowly. then, the bells rang out and the SkyKids spread
their wide, feathery wings. all except for Jaimes, who ran forwards and gave
his friend, Jem, one last hug before joining the group in the sky.

Riley-“This town is never going to be the same without you
Clara…”          ~walks over to Clara and
puts arm around her shoulder~Clara- “C’mon
cheer up.You don’t want to ruin the
moment.”Riley-“You’re taking this very well...Hey remember the day we
met?”           ~Clara smiles and holds
Rileys hand~Clara-“Of course I do.It was Friday 10th of October 2010!I saw you
alone on a bench and the park and decided to talk to you.”Riley-“Wow you
remember it almost as well as I do...You know that day changed my life.”        ~Riley and Clara both start to
sob~Clara’s mum-“Time is up girls.It’s 3:26 we are already behind
schedule!”                     ~The girls squeeze each other
tight~Riley-“Remember..Facetime everyday at 4 pm and if not text me.Also don’t
you dare change while we are apart.”Clara-“Don’t worry partner.I will never
change!”Both-“I love you bestie...Always have always will!”          ~The girls pull away from the hug and
clara jumps into her car~ ~Riley chases after car as it drives away~

Next, we returned to the time travel theme, coming up with a final scene for our time traveller where they had to say goodbye to someone - or something. In the older group, we started by looking at the scene in the Doctor Who episode 'Doomsday', when the Doctor (or the hologram of him) has to say goodbye to Rose for the last time on the beach. Brilliantly acted out by Lilia and Kyle, we looked at what they weren't saying as well as what they were saying.

This led to some beautifully moving final scenes, as the time travellers said their goodbyes to travelling companions/other characters - whilst many scripts still managed to incorporate humour and joy as well.

“It’s time to let her go Riley..”Molly whispered as she
hopped over to Riley.Snuggling closely,the small bunny tried to comfort her
owner.Tired eyes slowly closed as her shaking hands began to relax. “You’re
right….The whole reason I have been doing this is because of her.It’s sos
stupid.”Riley stuttered.Pulling her pendant out of her pocket,the young teen
relaxed her body and thought back to that faithful day.The faithful day where
it all began to go wrong.The day Riley hates the most. “You’re ready Riley.And
though I will cease to exist you will finally be able to live your life again.”
Molly quietly sobbed.Opening her eyes,Riley started to regret her decision
while she turned around to see the same hospital room she had seen many times
before.Looking at Molly,her eyes already began to tear up before the bunny
could even speak. “Look at me Riley...You don’t need me anymore!I love you
around the universe and back,but my time has come to say goodbye.But no matter
where you are my spirit will always be there…”A similar voice echoed
throughout the room.Turning around,Riley could see her past self and her
Mother.Handing the pendant to her daughter,the lady began to cough and
choke.“MAKE IT STOP MOLLY!PLEASE!”she shouted and screamed as she fell onto the
floor crying and shaking. “You have to let go.You will never heal
otherwise…”Molly whispered while she comforted the crying girl.Slowly,Riley
stood up and began to chant “I loved her but it’s time to let go.” over and
over until the room began to disappear. “My work is done.Im sorry Riley but I
must leave...I love you!”Molly exclaimed as she disappeared with the room.

And here is Jasmine's:

Caliburn looked at the world, it was mended. he had done it.
was this it then? could he finally go home? a white ball of light appeared in
front of him and spoke 'Caliburn, the talking raven, you have worked hard to
help many worlds. we have decided for you to make the choice, you can carry on
helping other worlds. or you can go home, oh, don't worry. weve got plenty of
ravens ready to take your place'

Next week is the final workshop before Easter, so we look forward to sharing some final writing on the time travel theme, before moving on to something new next term... see you then!