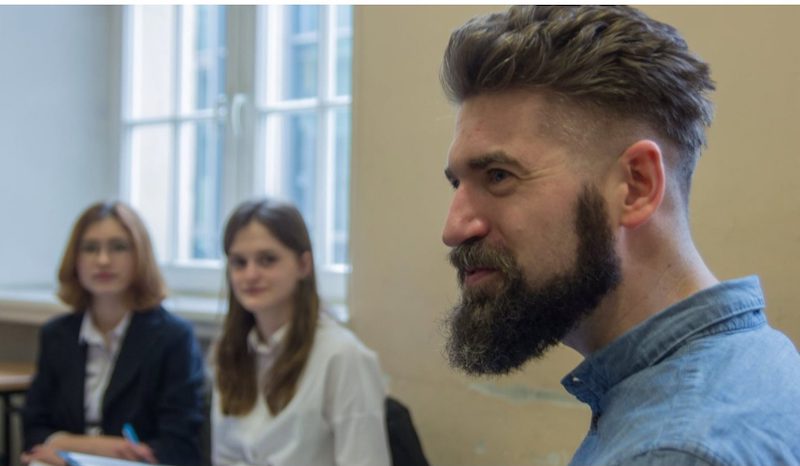 Over the weekend of the 14-15th of November, ArtfulScribe, in partnership with Winchester Poetry Festival, offered a weekend of poetry workshops led by poets who have made their homes in England from countries including Hungary, Nigeria, The Philippines, and Poland.

On Saturday, we were delighted to join the Lighthouse Poole Young Writers Groups to attend Bohdan Piasecki's workshop on Belonging and Identity. Bohdan is from Poland and currently lives in Birmingham. We began with a guided tour of inside our heads. What could one see if they went around the spaces inside our minds? What objects? What memories? What smells, tastes, emotions would they find there?

We then moved on to experimenting with writing in different voices. It was a lot of fun to adapt our writing to sound like a David Attenborough documentary, or like a football commentary, or like the train station announcers.

A bit of trivia - Did you know the voices (they're not real people, but automated announcements) have names? Anne, Celia Drummond and Phil Sayer do the announcements at Southampton Central.

Here are some of the pieces written by the young writers on the day:

Since Lockdown began earlier this year, families have been forced to live in the same space

with each other, all day, every day. Confined to the house, a pair of siblings, a girl and her

brother, must get along to survive. It has never been more crucial for the two to look out for

each other - if they don't, they face a long, painful summer of torment at the hands of the

other. How will they manage? Is it truly possible? Find out in our new series 'Locked Inside'

I am pretty happy on the outside, but what is inside me. I like to sing dance act and write, I

thought of creativity. I thought I’d ask my friends but they weren’t much good, They thought

life was about video games football but mainly just food. They also thought of unicorns and

rainbows all that galore, Don’t forget the mythical creatures like mermaids and more. The

ghosts and the zombies, all those monsters you will see, The ocean and the rainforest is

fitting a trombone into a hat. What I really care about what really is inside of me, In my head

you’ll find my friends and family!!!

My head is like a computer screen. So many open tabs. A news story about a bad event of

someone splitting open their chin. A loving story of two best friends reunited after

quarantine. A whirl of different story lines you don’t quite know how to fit together. A

whole tab open for lyrics from a song you’re trying to learn. A section for revenge plans that

we’ll just keep locked up for now. Who knows where that music’s coming from? A mix of my

playlist and some weird hybrid song. To the untrained eye a messy computer screen, but to

me a perfect representation of my personality.

First, on your right, you will see a reception classroom with a five-year-old girl playing with

the jenga blocks before registration. Another girl walks up to her and helps stack the blocks

into a tower. They exchange small talk, awkward at first, but becoming more comfortable.

Little did these girls know, they would become the closest friends they would ever have.

On the left is a radio playing snippets of conversation .From things on tv to YouTube videos

to people talking to each other.

Here, we can see the seven-year-old Hannah as she prepares to write a story, from an idea

that she has managed to capture in her mind. Many such ideas are often lost from her mind

within a matter of minutes, but the constant flow of ideas into her mind ensure that writer’s

block is something she rarely encounters. This is common in the infancy of such humans. As

she places the pen to paper, she complains at the jolt of the car, making it almost impossible

for her small fingers to take a firm grip of the pen. Her parents, however, are preoccupied:

arguing over the Satnav directions, and so this is something she is to contend with on her

own. Consequently, she steadies the notebook against her body, and begins to push the pen

across the page. It is amazing that such a small thing can carry such strength of purpose. But

will she finish this story? Or will it be like many others – left, abandoned, in unfinished

As you step through the bedroom, please mind the toddler. We have a birthday running

throughout the day, and as such, the bed will not be in use until late this evening. The

toddler will be waking up early today, so as she does so, please ensure you do not leave any

belongings in the bedroom, or they may be mistaken for presents. Toddlers can be highly

possessive, and we will not be held accountable for any loss of baggage. Please do not

contact us if you have any complaints. Thank you, and enjoy your journey. Or don't. We

A lone white wolf prowls through the forests of Siberia. Beside him is his pack, a family of

six, and two other packs. Wolves rarely conjoin packs, and only to hunt down a powerful

prey: bison. The wolf raises his hackles and lowers his head as they rush forward for an

attack. Snapping at the bisons' heels they set them on a run. The bison form a protective

circle around their calves. The wolves increase their speed setting the bison at after pace. *

wolves. * the wolves begin to eat the corpse* the bison will last them several days but soon

they will need to hunt again, such is the life of a wolf.

On the right is a road. It's impossible to walk the same road more times than I've walked

that one. Its home . it's a passage. if the phrase memory lane was to be real it would be that