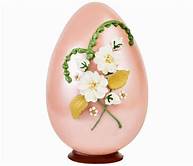 In the last workshop before Easter, we designed our dream Easter egg - anything goes! Here are some particularly brilliant examples:

On the outside there is a fairly thin layer of dark
chocolate, followed by a substantial layer of honeycomb, then some milk
chocolate. Inside there are small little eggs, and a hay nest with a pet
hamster inside. **PLEASE DO NOT EAT THE HAMSTER**. It is delivered by the
Didordo itself (why want an easter bunny when you can have a cat sized
hamster?), so the chance of you getting it is very small and also it’s
definitely very hygienic.

Dark chocolate egg which is nice and smooth with a hint of raspberry running through the shell. Inside there would be mini white and milk chocolate dolphins with a truffle-like centre. The middle will also taste like dark chocolate but with a hint of strawberry instead of raspberry. There will be wave-like designs on the egg. The box will also be in the shape of a wave and have sea splashing against the shore when you open it.

Next, the young writers were challenged to write a short story or scene where one character gives and Easter egg to another character - but there's a twist/surprise about the egg!

It was not his cat.

It wasn’t even a creature he thought existed.

The closest thing he had probably ever seen to whatever
stood before him, was a capybara (it was like a hamster, but the size of his
cat, Mifty).

But this wasn’t a capybara either, and just when he thought
nothing could possibly be stranger than being visited by a bizarre, oversized
hamstery-capybara, he heard a low, deep voice say:

“James, my name’s James,” he corrected the voice
subconsciously.

“Hello John,” it carried on “I am standing in front of you
right now to give you a teensy weensy gift,”

The whole situation seemed so absurd James was willing to
believe anything the thing said, even that his name was John. Out of thin air
the thing conjured an egg, it was wrapped in gold wrapping and bore a tag. The
tag was not much more helpful, as apparently it was to ‘John’ (he did not know
any ‘Johns’) and it was from the ‘Didordo’


Before he could even attempt pronouncing the second name,
the newly named John fainted.