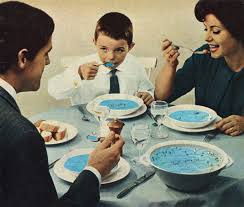 My mother has gone and bought herself a piglet

because none of us comes to visit anymore.

George has good manners and is clean in his ways:

he is courtly, thoughtful, easy to amuse.

He goes to mass with her, and sits sweetly

while she trots up to recieve. He doesn't stray.

She has made a cot for him in the kitchen

where he turns in our old clothes cut to size.

One Sunday I call on the way to somewhere else.

She props him up beside me in the high chair

and he fixes me with those dreary dark blue eyes.

When I tell him I'm glad he's there when I can't be,

he answers 'thank you' in a voice too like my own,

then bids me sit and make myself at home.

What I suggested this morning was that we read a poem and discuss it by applying the things we've learned about craft. Ever open-minded,  the group agreed. I'd already printed out some copies of the above poem, 'Family', by Vona Groarke, which I'd taken from the Bloodaxe anthology, "Being Alive".

First impressions included some laughter, and the general consensus that we liked the poem. The next comment came from Jackie, '...but what about those 'dreary dark blue eyes'? Yuk!'

It's certainly a strong image, and perhaps the strongest in the poem, but why?

So we talked about the weight of the repetition in the 'd' sound; how the image thuds into the poem with its 'dreary dark' plod. We noticed how this image is given three adjectives (although blue hardly seems to count). We have old clothes, clean ways and good manners, but the image of the piglet's eyes, fixed on the character of the poet, are given extra weight by the choice of not only 'extra' adjectives, but also the sound they make.

This led us to talking about word-choice, and editing. For example the use of the word 'cot' has a number of connotations to mother & child that, for example, the word 'basket' wouldn't. Then we noted how some words are not included, through choice; how the word 'communion' is dropped when mother 'trots up to receive', and further how the use of 'trot' allows for a mixing of personalities, foreshadowing the ''thank you' in a voice too like my own.'

After a good unpacking of the poem we moved into the writing exercise. Looking at the content of the poem we decided to write about family pets, and discussed different types of conflict. Mirroring the poem we could see where there was a fear of being replaced by a pet, and even a jealousy of the pet's position. We talked about pets being treated 'as if' they were a child, and wondered how far that might be taken. We also talked about interesting places and times to focus on including suggestions of 'feeding time' and the 'goodnight kiss'.

All seven writers produced a piece of work, and at the read-round we heard about a trip to the farm for city kids who had only ever seen pigs, sheep and cows on the telly; we heard about a cat dressed in bonnet and dress who escaped the house only to return w eating four new booties; we heard of a cat and a girl who moved to the city, and an escaped rabbit who spends the day watching telly from the sofa.

At the end of the session we reflected on the new format. The group as a whole enjoyed discussing the poem and how that acted as a springboard into our writing exercise, at least enough to give it another go, next week.

*It's important to note here that no-one is obligated to read out their work. Each writer can feel free to write what they like**, and there is no pressure to share with the group.

**It is equally important to note that no-one is obligated to write at our group. If a person just wants to sit and soak up the atmosphere, to contribute with their presence, then that's ok too.