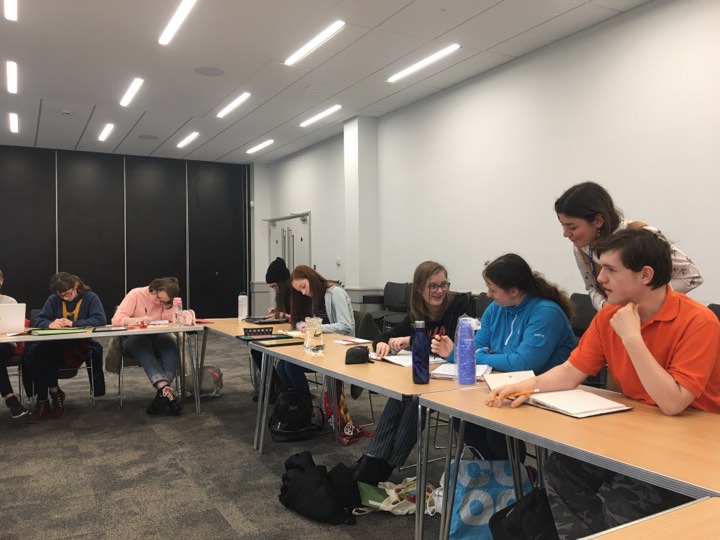 2020 is in full swing and we are straight back into Young Writers sessions. This week, we are focussing on the New Year, and new characters.

Going around the room, we all say what our New Years resolution is (if we have one) or one that someone else might have. These varied from eat more vegetables to learn a dance.

Then, transferring this to a character, the young writers are asked to write a New Years resolution for a fictional person. These can be simple e.g. read more, or complicated e.g. learn witchcraft.

Secondly, they were asked to decide where their character was on the strike of midnight.

Next, they were asked to decide where their character SHOULD have been at midnight - this could be the same place they were, or it could be different. Were they where they were supposed to be?

Then, who were they with at midnight? Where they alone? In a group? These questions should help to shape the character and bring them to life. Can you picture them in your mind?

For the next 10 minutes, the young writers then wrote 30 facts about their character. It could be hair colour, eye colour, their favourite TV show, favourite food, etc, anything!

Taking allll these details, the young writers were then asked to write a scene in which action occurs - e.g. running away from the police, cooking Christmas dinner, at a New Years party - and within this scene the details of their characters will come out. By subtly working the character's features and details into an action scene, the writers will be building strong, three dimensional characters.

BREAK - During the break, Tabby went around the group and checked in on their Arts Award research sections, checking if the writers had completed their notes. It was agreed that most would bring their work next week.

After the break, the Young Writers then shared their work:

Levi ran through the dark shadows of tall buildings the cross of Saint Peter hanging from his neck, glistening in the moonlight. His long arms moved back and forth, the cape loosely swaying in the wind. Where was he going? No one knew!

After 15 minutes of dodging parked cars and drunk pedestrians, Levi reached a massive wooden door. He knocked uniquely on that door, and it swung open with a boom.

"Come on in Levi," a voice came from complete darkness and Levi crept in.

"Ahh yes, Anderson, nice to see you again. The others will be here shortly," the mystery voice revealed itself.

The door knocked again and this time a young woman with dirty blonde hair walked in.

My character was outside at 11:59pm and she was alone, wondering through a lonely forest. The big downhill clock struck 12:00pm. Mandy, my character, wasn't where she was supposed to be.

She was with her cats Chocolate and Chip. She was going to get some more snails for her frog but had become lost. The woods were famous for being haunted but no monsters came near Mandy because she was a WITCH. Her raven-black hair billowed out behind her. She was also being followed by 42 Guinea Pigs as she was teaching them to hunt for carrots. Her navy-blue eyes looked about. She was searching for something. She found it, picked it up, and turned to face her house. (Since she was a witch, her house tended to wonder about behind her.) Mandy turned away, pretending she had not seen it.

"Don't think I don't know you're there house."

The house creaked and placed itself in the middle of a clearing and started to snore rather loudly. Mandy rolled her eyes and sighed. "Well... at least I've found it, a snail, that makes 15 all together.' She plodded back to her house and disappeared through an open window.

After this, the young writers had to write down a book/poem/song/film which they personally love, and would like to share with someone else. These written down, they were then folded and put in a box, for another person to pick out and therefore discover something new!

Moving on from this, the writers then wrote monologues which explained the location of their characters at the strike of midnight, still while revealing details about their characters! Hayley even managed to include the song she had picked from the box - Katy Perry Roar.

Similar to that of the younger group, we went around the room and discussed the premise of New Years resolutions, and whether we bothered to make any. Most of the writers hadn't set any, while others made a whole list. From this, the writers then wrote down New Years resolutions which can be as weird and wacky as they like which they can attach to a character.

The session then followed a similar path to the younger writers:

1) Where was your character when the clock stroke midnight?

2) Where should they have been at midnight?

4) What is one hope and one fear installed in the character?

Next, the writers had 10 minutes to write down 30 facts/details about their character.

These facts must then seep into a scene which involves action, which the writers spend the next 15 minutes working on. E.g. As Joe ducked under the doorframe - his own body too big for the house... (tall!)

Tossing and turning was not quite the action she achieved, nor was was it that which she was aiming for. Yet, her skin was sticky against rustling sheets, and no position felt comfortable. Dirty blonde hair fanned around her on the suppressed pillow, itching the back of her neck, and framing her frustrated complexion; her eyes were closed with too much force to be natural her brows furrowed with the concentration of keeping them closed, and they anger that they wanted to be open.

She could so easily untangle her interlocked lashes, pry them apart like stitches from a seam, and let her hazel eyes drink the liquid silver which stained the carpet, the ceiling, the bed. Esmerelda had always preferred moonlight to sunlight - the iridescent skin of one thumping the golden flesh of the other.

I walked miles today. I had to rush home because the sun was falling to sleep. It was worth it though. The towering trees were colossal as ever. The sky was reaching to the atmosphere, like a hand stretching. Clouds, as voluptuous as the cotton we grow. I have never felt so small, and yet to adventurous. However, it is indeed too good to be true. Why eyes are no longer as blue s the sky. My heart is not as relaxed as once was. There is a disturbance and there is no mistake. In the last year, the climate in my kingdom has been changing rapidly.

As a last exercise, we then did free writing from the perspective of the character as the clock ticks down to midnight on New Years Eve. 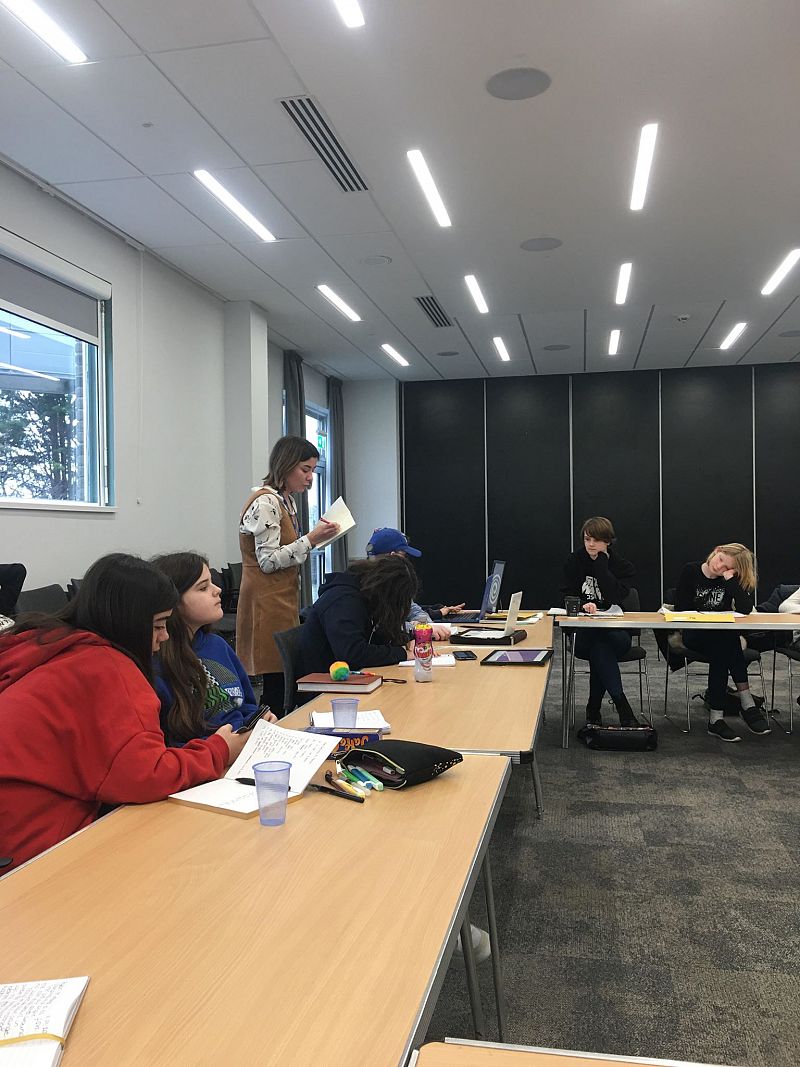