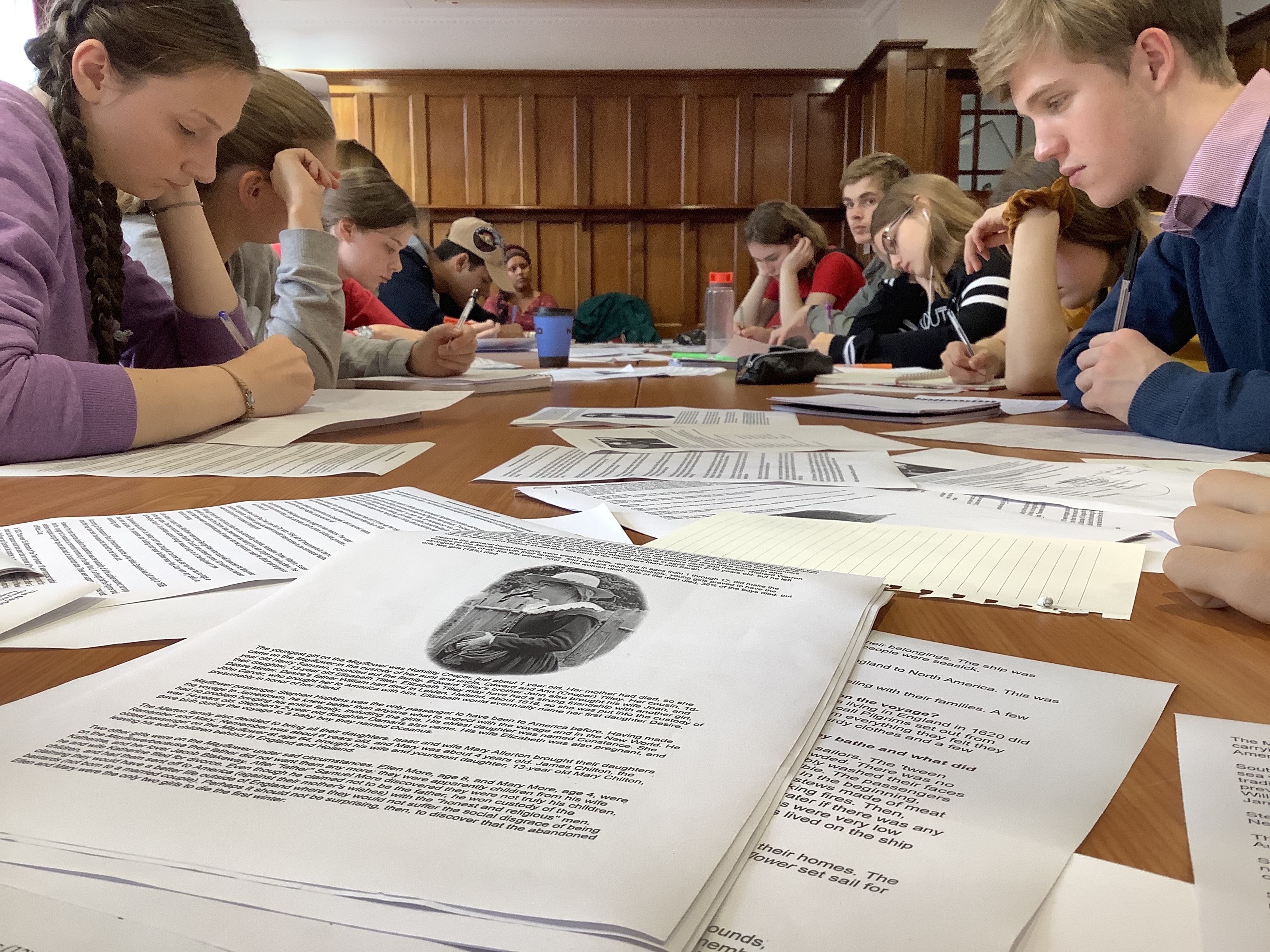 The ship lurched violently in all directions as if writhing in pain, and fear rose in my chest, threatening to explode into a scream. Rain hammered the deck above, while here, on the gun deck, claustrophobic darkness consumed us. (Extract from Isobel’s story about the Mayflower journey)

In 2020, it will be 400 years since the Mayflower set sail for America. Its passengers first came together when the ship docked in Southampton, some Pilgrims from the city of Leiden in the Netherlands, brought across on the Speedwell, others from London. In the weeks that the ship was here, being stocked with supplies for the journey, a few Southampton locals joined the other passengers, looking forward to a new life in America.

The Mayflower is a part of Southampton’s history. The theatre where we are based takes its name from this piece of history – and we share this name too. Today, another project inspired by stories of journeys and new beginnings, Mayflower Folk, ran the first of a two-part workshop for us. Nazneen Ahmed and our very own Susmita got us thinking – and writing –  about what it would have felt like to be a child on that sixty-six-day journey across the Atlantic.

We listened to the sounds of a stormy sea, giant waves crashing against the wooden sides of the ship, rain lashing the deck. We closed our eyes and imagined the salt on our lips, our stomachs churning, the smells and sounds of 101 other passengers and thirty crew on the ship, no land in sight.

We wrote down these sights and sounds; we also wrote about being on the tween deck, its ceiling only five and a half feet high! The fear and distress of spending weeks in those cramped quarters were in our notes too.

In Group 2, we also imagined the Southampton of 1620, listing places the Pilgrims would have seen that are still in our city today, like Tudor House, God’s House Tower and the walls.

To help us get a good sense of time and place, Nazneen, who writes historical children’s fiction, also gave us sheets full of interesting information about the Mayflower and its passengers.

Our notes bursting with relevant details, we spent the second half of the session planning and writing our stories set aboard the Mayflower. Most of us wrote from a child’s perspective, choosing names of children who were passengers on the Mayflower.

In Group 1, Katie wrote about a character who was undecided about boarding the ship: ‘The wind rushed down onto the deck; it whipped my shawl around me, dragging me towards the opening. I made my decision.’ Erin’s story alludes to the Pilgrims’ belief that girls weren’t strong enough for the journey and many of the daughters had been left behind in England and Holland: ‘There’s not many children here, especially not girls. My head is throbbing and the salty mist is making my eyes sting.’ When Amelia’s young character sneaks onto the deck and gets soaked by the rough sea, her father shouts, ‘“I told you not to go on deck. The fresh air is bad for you.”’ This was another detail we had read in the research sheets. Milly decided to narrate her story in rhyming couplets: ‘Here is my story / Of storms and the sea / And of the catastrophe / The journey turned out to be.’

In Group 2, Katie also used poetry to express what it would have felt like to spend weeks aboard the cramped ship: ‘Days dripping into weeks / As colour faded from rosy cheeks / Leaving us as blue as our surroundings / The living almost indistinguishable from the dead.’ The rhythm of Amelia’s poem was similarly dark, ‘Rain. / Rain pounds the deck. / Waves. / Waves rock the boat. / Wind. / Wind howls through the gundeck.’ Tom’s character views the journey a little differently. After being rescued from a shipwreck in 1609, Stephen Hopkins vowed never to set foot on another ‘seafaring vessel as long as he was alive’, but when he spots a naval conscription order in the town hall, he sets sail on the Mayflower, the boat ‘his last chance. A few months or 5 years. His choice.’ Many of the characters in our stories, like the Pilgrims they were inspired by, set off in hope of a better life, but without knowing if they would make it across successfully. Sam, writing in the voice of a character who has sailed on the Atlantic before, ended on an ominous note, ‘Do I think we will get there? Maybe. Who will make it alive though is a different story.’

Next week, Nazneen and Susmita will teach us a South Asian art style that we’ll use to illustrate our stories. Until then, write on! 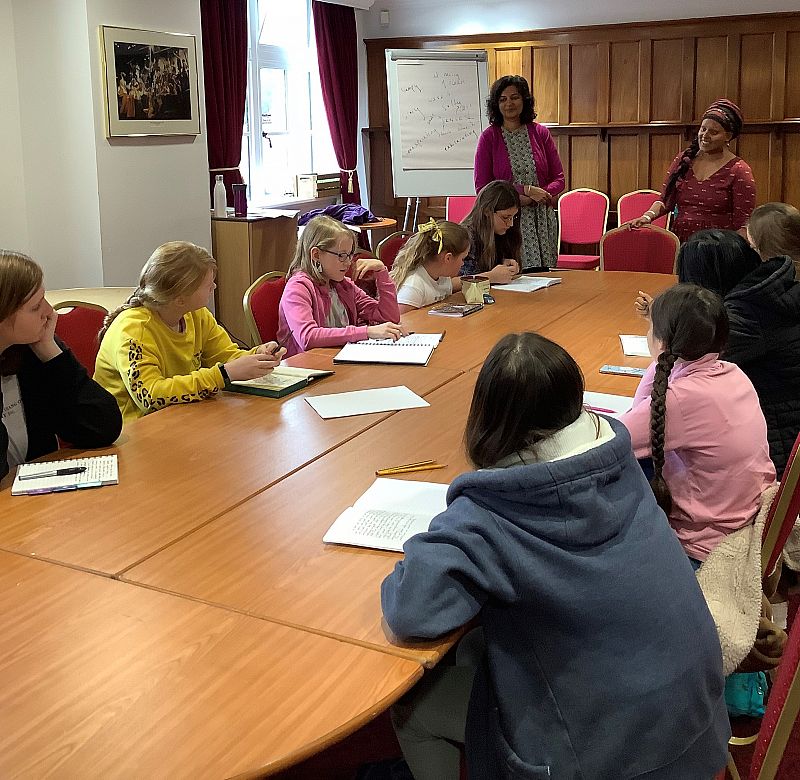 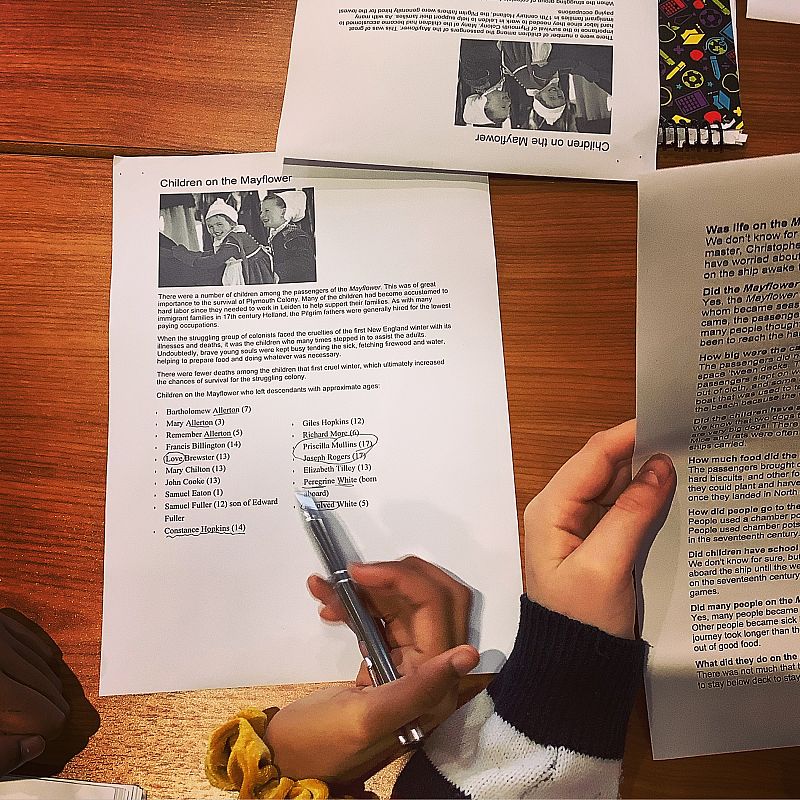