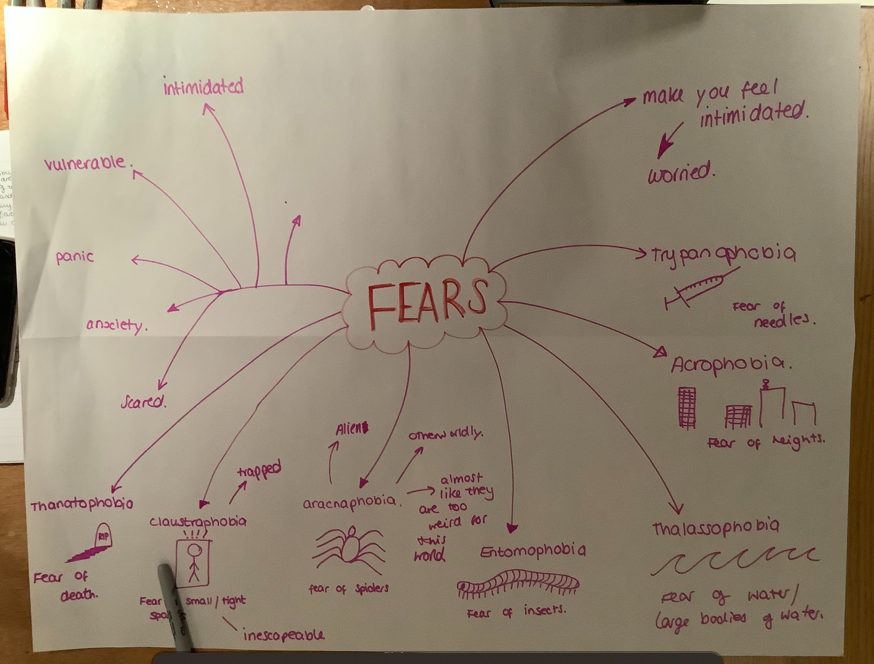 The first session back from half term began on Tuesday night with a prompt to ‘describe your week as a costume’ – answers ranged from football mascot outfits to flowing ballgowns to controversial disasters on the catwalk which turn out to be suprisingly comfortable to wear.

Ahead of the opportunity to showcase work next year, the group was asked what they would like to write about going forward.

From this pool of interests, we adopted ‘fear’ as a theme to interrogate in pairs, asking ‘What are our fears?’ and ‘How does fear feel in our body, or manifest in our environment?’.

The mind-maps resulting from this exercise are pictured below – collectively, we can fear anything from insects to deep oceans and heights, to the dark, society, and sweat. Antosh observed how from an abstract noun we were able to effortlessly produce these many intricate connotations.

We were asked to choose one of these strands from our mind maps and free-write about it, perhaps in connection to one of the genres we had put forward earlier.

Here was a response from Sophie:

You’re stood on top of a building, the tallest building in New York City.

You look down at the world around you, how far away the ground seems, yet so close to you that in one jump you can reach the floor.

The feeling starts to creep into you.

Ebbing and flowing into every corner of your mind.

The feeling of insignificance.

The feeling of panic, anxiety, stress.

The feeling of vulnerability.

That you are so small.

So small compared to the buildings around you.

The fear is now swirling vigorously around your mind.

Left, right, back and forth.

You’re frozen to the spot.

Your chest feels restricted. The fear has enveloped your body, taken over your movements, manipulated every part of you, tied you up so you cannot break free.

Here was a response from Emily:

In today’s world we all live in a physical state and a subconscious state. At most times we are all in the company of someone else but what if they faded away? How long would it take for your conscious to forget what normality was like? Could you remember their voices?

We all take it for granted but people leave more often than never, even by choice… the desire someone would have to leave. The thought of why is drowning me. With or without warning, either way you’re never prepared.

The possibility of this is overwhelming enough- as if the process comes in two parts, both being as haunting as the other. You get no say, it just happens. The feeling of belittlement is flooding, for someone to discard you that easily- you feel meaningless, small and irrelevant.

It’s consuming, pressuring your every thought in case you trigger that feeling in someone you don’t want to lose.

The group were particularly supportive of each other this week and it was great to see pens still going at the end. We will continue writing at Crow’s Nest next Tuesday. 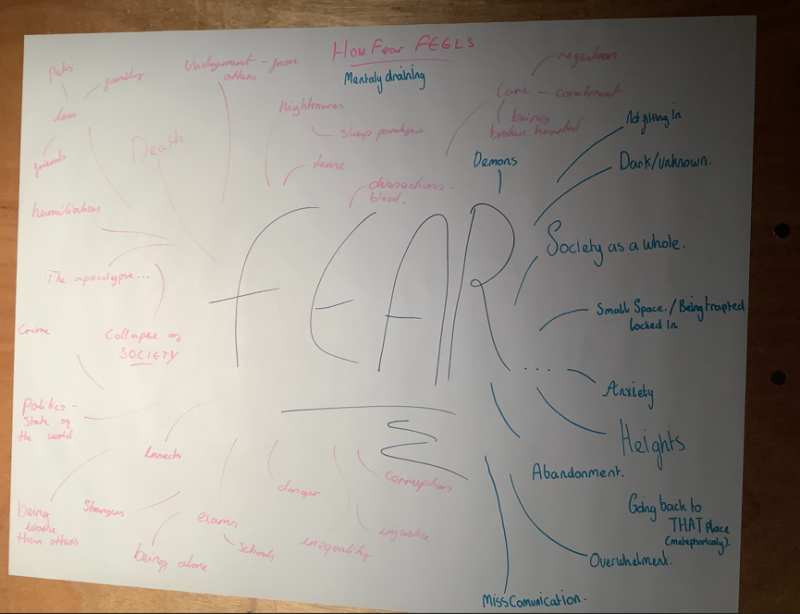