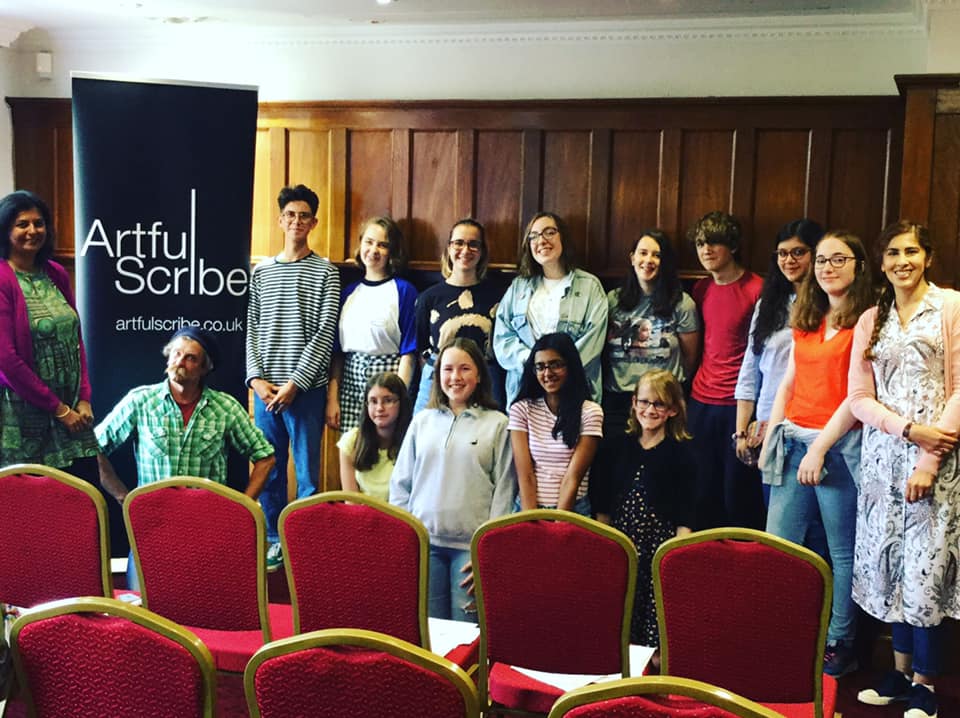 The end of an academic year is bittersweet. It’s a time to celebrate another successful year, but it’s also a time for goodbyes.

20th July was our final session before the summer holidays – the perfect opportunity to showcase the fantastic work our writers have been doing all year. Parents and young people arrived, everyone helped themselves to hot drinks and biscuits (much excitement about the Jammie Dodgers), then Susmita, our Lead Facilitator, welcomed the audience and introduced our headline act, Jonny Fluffypunk. Sporting what the Independent has described as ‘England’s most pretentious moustache’, stand-up poet, slam poetry coach and ‘sustainable nihilist’, Jonny, began his set with a love poem to coffee. Performing poems from his books ‘The Sustainable Nihilists’ Handbook’ and ‘Poundland Rimbaud’, he had us laughing, answering questions and chanting – everything to get the room lively and ready for the young writers’ stories and poems to follow.

Rohini and Amelia kicked off the readings with an excerpt from Rohini’s script set in Tudor England. This dialogue between a Spanish and English merchant was one of the many pieces that the young writers had done to commission for Tudor House, earlier in the year. Tom’s showcase piece about the warship Peter Pomegranate, performed by Tom and Bea, was also part of this project. Bea and Amelia read pieces of their own, too: Amelia’s, an insightful poem about a young person who realises that school isn’t all that bad; Bea’s, a story about soldiers who are killed in battle and brought back to life as a forest.

After a short break, we were very pleased to introduce a special guest, Hannah Wood, a young woman who began writing poetry when she joined Mayflower Young Writers three years ago. Since then, Hannah has gone on to be a Hammer and Tongue regional finalist and has performed her poetry in Southampton, Bournemouth and elsewhere. Hannah’s ease in front of an audience was inspiring and the poems she shared, stories about growing up and looking at the world in wonder, were intricate and acutely observant. We are so proud that she began her writing journey with us and look forward to hearing about her successes. She is off to study English and Creative Writing at UEA in the autumn, and we wish her well!

Amongst the young writers from the 14-18 group, Eva shared a vignette that she had written after the loss of a friend. We relished her descriptions of sunrise and sunset and the emotions that the light and dark conveyed. The trio of Cassie, Hari and Sophie read love letters set in WWII. Characters Fran and Jake talked about dancing under moonlight and dreams of being reunited. This, though, was followed by the letter by Cassie revealing to the audience that Jake had not been at the front at all, but in the English countryside in the arms of Daisy, instead! Sophie also read her monologue about the death of Fred the Man and the birth of Fred the Ghost, who would go on to cause havoc on the Titanic.

Applause filled the room after each reading as everyone was so proud and impressed by the young writers. Katie shared a story inspired by the Horrible Histories project we did last term and Hari returned with the final showcased piece, a prize-winning poem from the perspective of a lamp post that has shone light on a street for decades.

Jonny Fluffypunk entertained us with another poem, followed by our thanks to everyone involved over the last year. It was time for most of us to take a break for the summer but for some of the young writers, this was good bye. Like Hannah, Eva and Sophie are heading off to university in September. We will miss them, but we wish them the very best in everything they do and look forward to seeing them again when they're back in Southampton.

As for the rest of us, we'll be back at the end of September, with new commissions to work on, stories and poems to write and many more shows to attend. Until then, enjoy the holidays and write on!