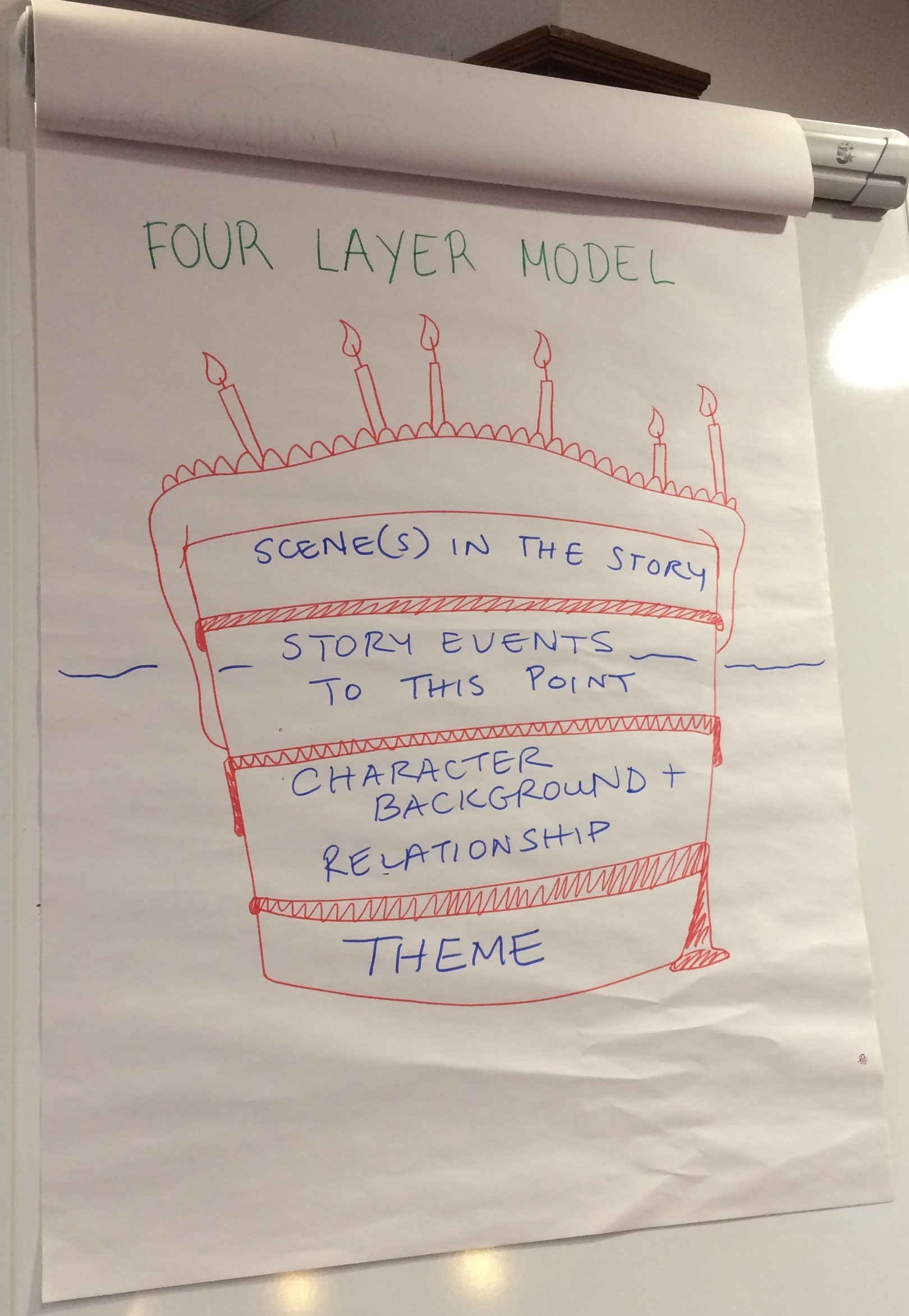 In today’s session, our Young Writers explored flash fiction. We began with a diagram of a four layered cake, representing the four layer model of flash fiction. The bottom was ‘Themes’, then ‘Character Background and Relationships’, then ‘Story Events to This Point’, before, finally, ‘Scene(s) In the Story.’ Susmita also described this as an iceberg, only the top layer above the water, the rest implied or left unsaid.

Susmita divided the whiteboard into three sections, for Heroes, Villains, and Settings, which the Young Writers filled with their ideas. Possible heroes included a dog, librarian, ogre, and a doctor, while villains included a murderer, skeleton, witch, rat, and convict, and settings included a bakery, theatre, Lidl, and chip shop. Susmita then switched the headings for the sections, so that the heroes became the villains.

Using a hero, villain, and setting from the board, the Young Writers came up with a summary sentence for a possible story, which they then expanded into a 100 word scene. Here’s a piece which used ‘Lidl’, ‘witch’, and ‘librarian’:

The mundane aisles of Peru’s only Lidl held a surprising number of ingredients for a witch. Frankie’s latest spell had sent her supermarket hunting for Cadbury’s vegan chocolate, which was stressful to say the least. But this was not the shopping trip she thought it would be. The air was suddenly cold, and the fluorescent lights hanging overhead seemed to flicker. The witch turned slowly, all thoughts of vegan chocolate and tupperware gone from her mind. The librarians were coming, their clawed hands pointing to her bag, razored mouths forming the word “book”. They had found her.

Other pieces saw a potato thieving frog confronted by a potato farmer in a chip shop, and an escaped convict dog being stalked by a skeleton on its way to Lidl.

Exercise 3: With a Twist

The Young Writers were then able to write a 100-word story of their own, aiming to end with a dramatic twist.

Amelia seems to believe she can solve all her problems with houseplants. Or sometimes she thinks she can share all her problems with houseplants, like the time she poured half a bottle of southern comfort into the potted geraniums. She says houseplants make it look like you’ve got your life together, says they cover up the mess - Amelia’s bought so many swiss cheese plants her living room is starting to look like an arboretum. There’s nowhere to put coffee cups or TV remotes. You can’t take a step without knocking something and spilling soil onto the carpets. Last week, I found the cutlery tray full of dead leaves, and a cactus planted in her favourite coffee mug. Amelia believes she can solve all her problems with house plants. I’m not sure what will happen the day she looks round at the dried and wilting leaves around her and realises the empty solution has become the problem.

His Favourite Colour is Yellow - Morgan

I went on and on about the sun, its colours and its warmth, for ten minutes I spoke about why I loved it so much until an anxious feeling filled my chest.

My finger hovers over ‘delete’, but by then it’s too late, his reply comes through.

“I love learning new things about you”.

His words send me reeling, a grinning flustered mess, my heart won’t stop beating faster than a runaway train. I forget I even told him, the conversation long ago, until she asks my favourite colour and he replies:

As the man walked home that Tuesday, he thought about his children, Peter and Erika. Twins, only six years old. It seemed strange that his whole world rested in the tiny palms of two children. He yearned for their safety above all else.

His stomach rumbled and he smiled. His wife was making roast beef for dinner, and the prospect of what he thought was probably his favourite meal quickened his pace.

He would need to wash first, of course. He was proud of his work, but he hated the smoke, the smoke that crawled into every pore of his body and stay there.

He passed another man in uniform at the crossroads.

You’re tired. It’s a long session, and 7 year olds get aggravating very quickly. Mess is everywhere, colour on the floor, paint on their uniforms. Their parents will kill them. The newspaper protecting the tabes serves little purpose, not stopping the bloodbath of glitter on the floor. Trump’s face is ripped in two, violent headlines hidden under heart shaped card. They laugh, treat each other nicely, with no corruption of cruelty. They play on articles they have no say in, articles that scream death. For now, they don’t hear the words that will be screamed at them soon. Fix it.

The Young Writers’ last piece of flash fiction was based around using a popular fairytale character and using them to address contemporary problems, such as having one of Snow White's seven dwarves, Sleepy, become someone suffering from insomnia.

The pied piper of hamlet

Marching around the town one day,

Leading all the rats away,

Til no more rats stew.

The police can’t find the piper,

He left no tracks behind,

The town is in ruins,

he has left them all to cry,

Mothers without their children,

Wondering what they could do

To find the rats he led away,

The rats they call children.

Rapunzel looked down from her window and gazed at her hair. She loved it, the length, the colour, the texture, everything about it was perfect. Her mother climbed her hair everyday; it was the only access in and out of the tower. It hurt sometimes, if she wasn’t careful, but it was worth it.

“Rory,” her mother would say, “How many times do I have to say this? Get out of that dress, boys don’t wear pretty clothes!”

How she wished to escape the tower and finally be herself.