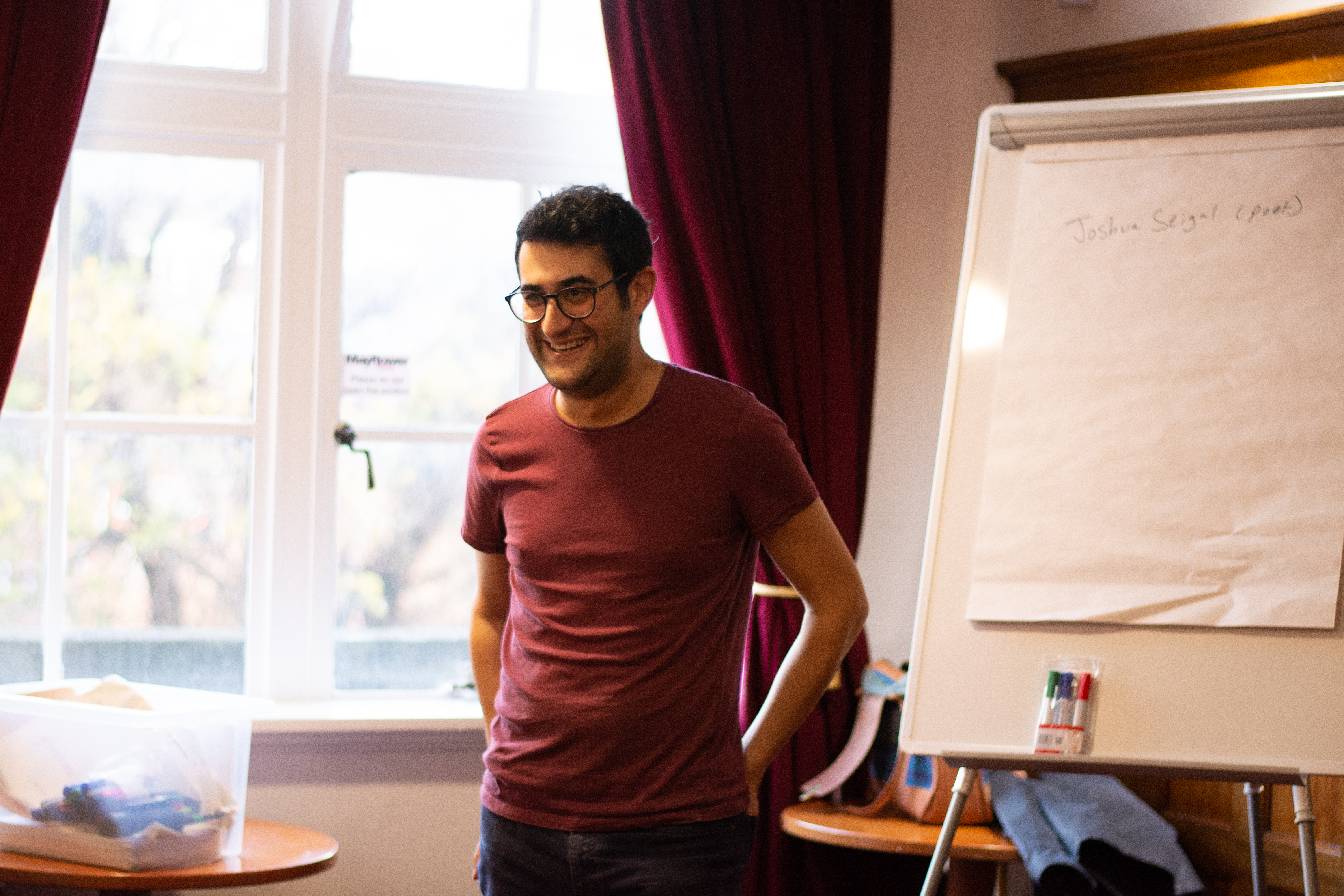 The event that ended the first day of the festival was a celebratory showcase of everything that the So:Write writers have achieved in the last two years. In a performance space of NST City, we heard from members of the Women's Writers group; our Writers in Residence, Nazneen Ahmed and Iain Morrison; Nazneen's library group who had been working with Southampton's Archives; and from our Young Writers leader, Susmita Bhattacharya, reading from her new book, 'Table Manners'.

As part of the showcase of the work of our Mayflower Young Writers, one of our writers from the 11-14 group, Nhu Tran, read her short story published in the Mayflower Young Writers Anthology. 'Atchoo!' is wonderfully funny and heartfelt, and had the whole room laughing and 'aww'ing in all the right places. I was also able to read out the insightful, comic work of Della Darvill, 'Paper Money', also found in the anthology.

The evening was a wonderful celebration of the achievements of the So:Write project, and all of its writers.

Josh Seigal is a London-based poet, performer, and workshop leader. This weekend, as part of the So: To Speak festival, he joined us at the Mayflower Theatre to lead our Young Writers in some fun, silly writing exercises on writing poetry. It was lovely to see the two age groups working together, and it was brilliant to see a few new faces, too.

Seigal began by reading some of his own poems, about the power of telling your problems 'to the dog', his most embarrassing memory (when he hugged a woman he thought was his mother on the beach who turned out not to be his mother), and the power of books - 'it's never, no it's never, no it's never just a book', with (almost) all of the Young Writers joining in with the chorus.

Individually, the Young Writers wrote down as many song titles they could think of. Then, in small groups, they arranged their collective lists of song titles into a ten line poem, in an order that told a story.

Seigal announced: Ready, Set, [Colour], and the Young Writers had a minute to write down everything they thought of to do with each colour. They then decided on a colour, not necessarily from the list, that they thought represented them. We had a wide range, from turquoise and teal to magenta and purple to black.

Exercise 3: I See Your True Colours

Seigal then handed out two poems, 'Just Like Me' by Lawan Mitchell, and his own poem 'Colours'. Both used vivid imagery to describe the colours that represented their authors.

The Young Writers were then able to write their own versions, on how their chosen colours represented, for example, their individuality, changeability, authority, jealousy, cunning, or humour.

Exercise 4: 10 Things I Can't Live Without

Seigal drew a box on the whiteboard, and filled it with 10 things he couldn't live without, including his bed and glasses. The Young Writers were invited to do the same, making the objects as personal to them as possible - drawing the box was optional.

Seigal then handed out another two poems, 'You Are', written by students from a past workshop, and his own 'Mum', written for Mother's Day. Both described a person important to the author through a series of metaphors - to take an example from Seigal's poem, 'You are my coat, protecting me from the rain.'

Using their 10 objects, the Young Writers wrote their own versions, describing an important person (or dog) in their life using, for example, alphabetti spaghetti, a notebook, invisible ink, a teddy bear, a road, the sun, a hug, their phone, or sushi.

The last event of the festival saw the So: Write writers groups come together again, this time in the John Hansard Gallery, surrounded by Caroline Bergvall's trilingual 'CROP'. Again, we heard from the Women's Writers group, our Writers in Residence, and the library's writers group, as well as from our own Young Writers.

Nhu Tran read her 'Atchoo!' again, to even more laughter. Sophie Lockwood read her piece, "It's A Sad Tale, It's A Tragedy", a bold, modern-day retelling of the story of Orpheus and Eurydice, and Rohini Bhattacharya read her wonderfully surreal and funny 'Conversations with a Bus Driver'. I was able to read Bea Darby's 'The Northern Forest', a fantastical tale of a war against the spirits of the Northern Forest, with a message, on the importance of never letting the tales of our soldiers fade, just in time for Remembrance Day. She was in the audience, so I hope I did it justice!

It was the perfect end to such a brilliant weekend of celebration, of Southampton's artistic community and all their talent, and hopefully won't be the last time we get to see Southampton's writers come together to read and listen.

Lastly, a word from Susmita Bhattacharya, who leads our Young Writers sessions:

The weekend has been a heady rush of celebrating the creative engagement of the SO:Write project and what a success it has been.

I am so proud of the Mayflower Young Writers – one of the So:Write projects in Southampton. We’ve been on a fantastic journey along with Mayflower theatre – exploring creative writing, attending shows, collaborating with other SO:Write and community projects. It was an incredible moment to see the young writers take to the stage and share their work with the audiences on Friday and Sunday.

I just wanted to say a big thank you to everyone involved in making the Mayflower Young Writers who they are: to Matt West for giving this project and opportunity to us. To Mayflower Theatre for hosting us in that very special space and for working alongside to provide the best possible experience for the groups. To Solent University for hosting us during the Mayflower refurbishment period. To the Art House Café for hosting our showcases. To the wonderful assistants we have had the pleasure of working with: Andy, Hollie and Sophie (our newest lovely assistant) and Sophie, our volunteer helper. To the Mayflower Youth Theatre for bringing to life our scripts for the immersive theatre pieces performed at the Titanic exhibition at Sea City Museum. To the lovely guest facilitators who gave us their time, talent and expertise: Jacquelyn Ockwell, Rhian Edwards, Nazneen Ahmed, Dinos Aristidou, Iain Morrison, Josh Seigal, Matt West.

And the biggest and loudest round of applause for the young writers themselves. I can never, ever walk up the stairs at Mayflower without hearing your loud singing voices echoing through the theatre, nor forget how you have totally owned Fred, the resident ghost, nor can I forget those smiles, enthusiasm and some real good talent. So proud of you all