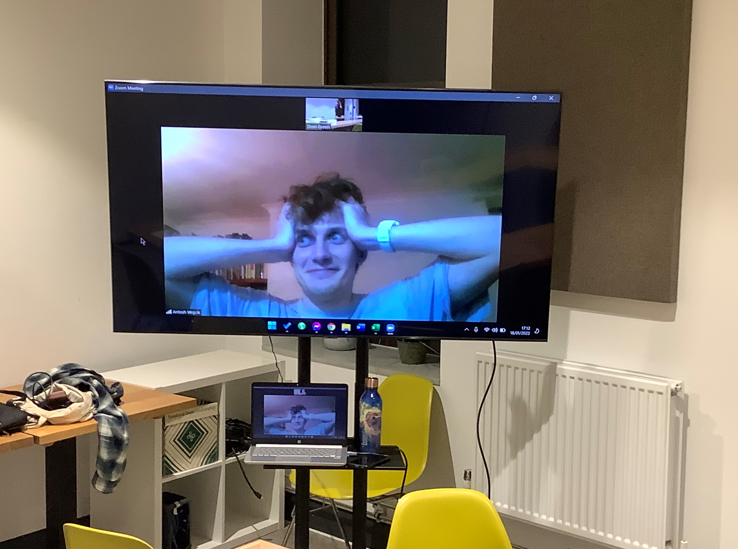 Crow’s Nest Creative Writers reconvened for a new term on Tuesday night to new and familiar faces, and while last minute train cancellations forced Antosh to come to us through the big screen rather than in-person this week, we nonetheless got the session started in the typical fashion...

From a prompt to describe their previous week as a hot beverage, the group's responses included: something undrunk to the point of having gone lukewarm, lemon honey tea so hot it burns your tongue, and a hot chocolate that even without marshmallows and cream is surprisingly tasty.

After being shared a couple of optional writing opportunities for our age group, including this young-persons call-out from John Hansard Gallery in partnership with ArtfulScribe (deadline: 7th February), we were introduced to the theme of the session - a requested focus: Character.

Antosh posited that even when a piece is decentralised from people, based instead around a room for example, that space can still act as a character. This was abstract thinking which proved a good lead in to the first exercise, where we crowdsourced objects as a group, coming up with three each, which gave us this list:

Individually choosing one object from this pool, we were tasked with making spider diagrams of all our associations with that one object – its adjectives and characteristics.

We then pulled these into a (not necessarily realistic) personified character from any genre we liked (fantasy, sci-fi etc.) and profiled them, considering who they are, where they live, and what they do…

Once we had these profiles, we stepped back from them to discuss character design in more detail, considering how our impressions of a character have a lot to do with how they are first established to us i.e how we (the reader / audience) meet them.

This called for an examination of the storytelling tool In Media Res where a story or scene is begun in the middle of a crucial situation/drama/circumstance, using Justin Torres’s We The Animals as an example (see extract below).

We could see as a group how we had been dropped into the story We The Animals while it’s already going, not just arbitrarily where events might have ‘begun’ – a clear demonstration of In Media Res. Antosh also drew our attention to the perspective / register of address present in the extract – 1st person plural (“We”) – likening it to synecdoche, a word used to describe a figure of speech where a part is used to represent a whole.

The next task, influenced by what we had read, was to write about our character’s wants, in 1st person like in a diary entry.

After this, we considered narrative perspective more deeply (see slide below on homodiegetic and heterodiegetic narrators), looking at the opening of Phillip K Dick’s A Scanner Darkly (see extract below) as an example of a narrator who is distanced from the action. We felt the benefit of the heterodiegetic narrator in this case was separating objective reality from the character’s warped experience so the reader could distinguish the two.

We followed this by writing about our character in 3rd person; here was Conrad’s:

A man sat at a table, examining the faces of those around him - looking into their eyes for hints of their thoughts, their worries and their struggles. He had decided that his father was probably thinking about how to convince him to leave the house. “You’re 27” he would say, looking deeply into the man's eyes, “You have a lot of living to do and it should not be here.”, the father would then, at around this point in time, give some motion to his speech, such as a scratch on the chin or a solitary glance to the ceiling.” You have the means and the motive to move, so why don't you? You could just move on, you know, just move on.” He could not see how the man could not leave, as the man had all he wanted - there was nothing more he wanted than to live there. The man looked into his mothers eyes. They were embroidered with pure, deadly rage. The man saw this and placed his hand on hers and whispered into her ear - her rage wanted to stay, it really did, but it just was not strong enough to fight with comfort. He liked his time here. And the struggles were nothing and the conversations were nothing and the conflict was nothing and the people, the people were everything.

Finally, we turned to Miranda July’s Shared Patio (see extract below) as an example of a homodiegetic narrator, the benefit of which we felt to be their ability to touch on the idiosyncrasies of a person’s unfiltered thought pattern. Writing from inside our character’s head, our aim was tapping into the peculiar rhythm of how this person, who began the session as a night light, saxophone, or tin can, thinks...

Crow’s Nest will come together again next Tuesday evening at MAST. 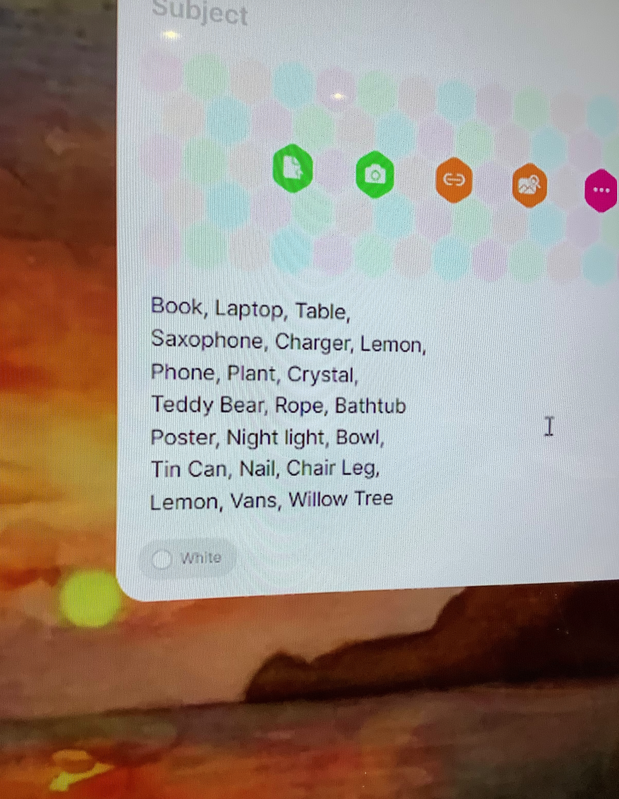 Justin Torres’s We The Animals 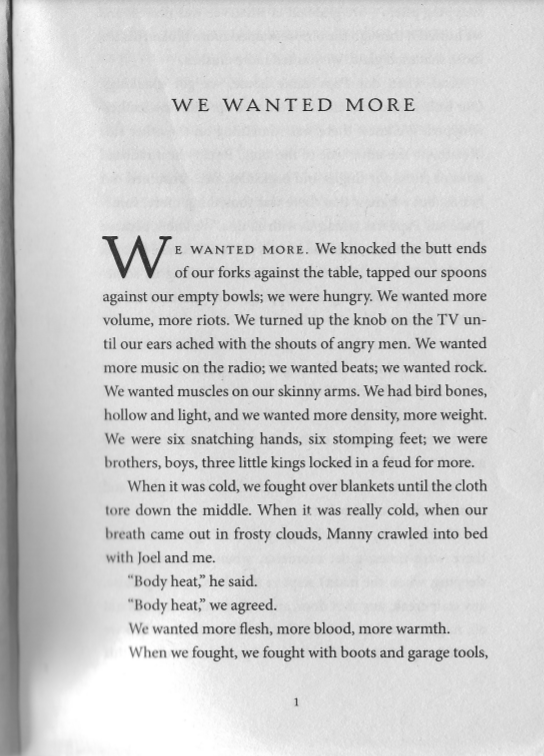 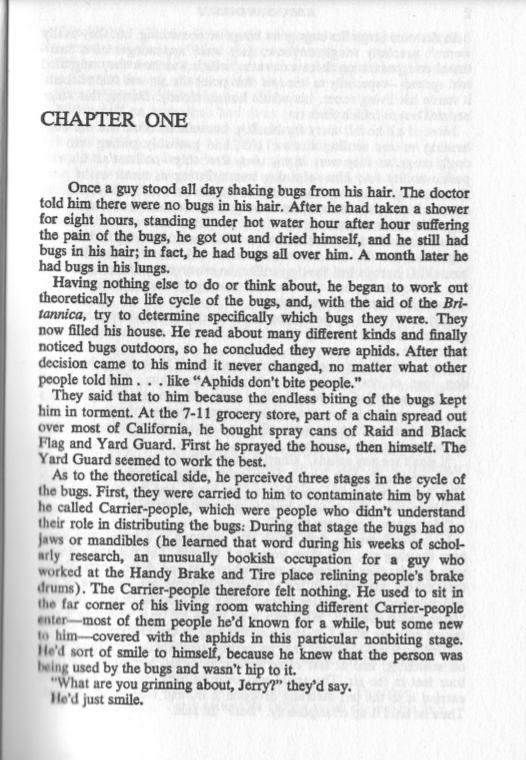 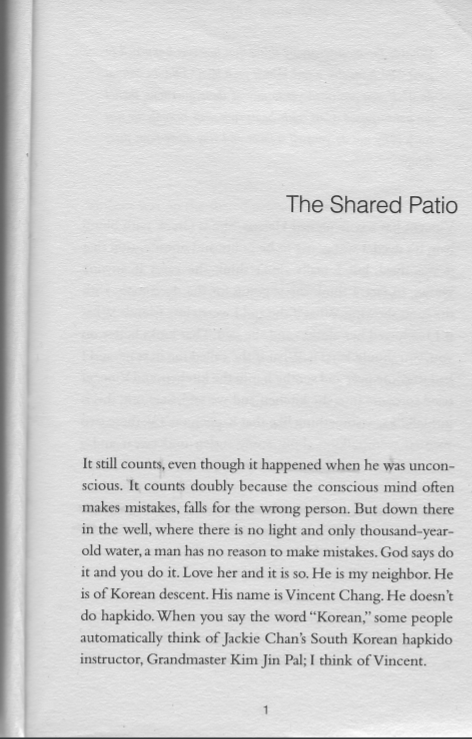