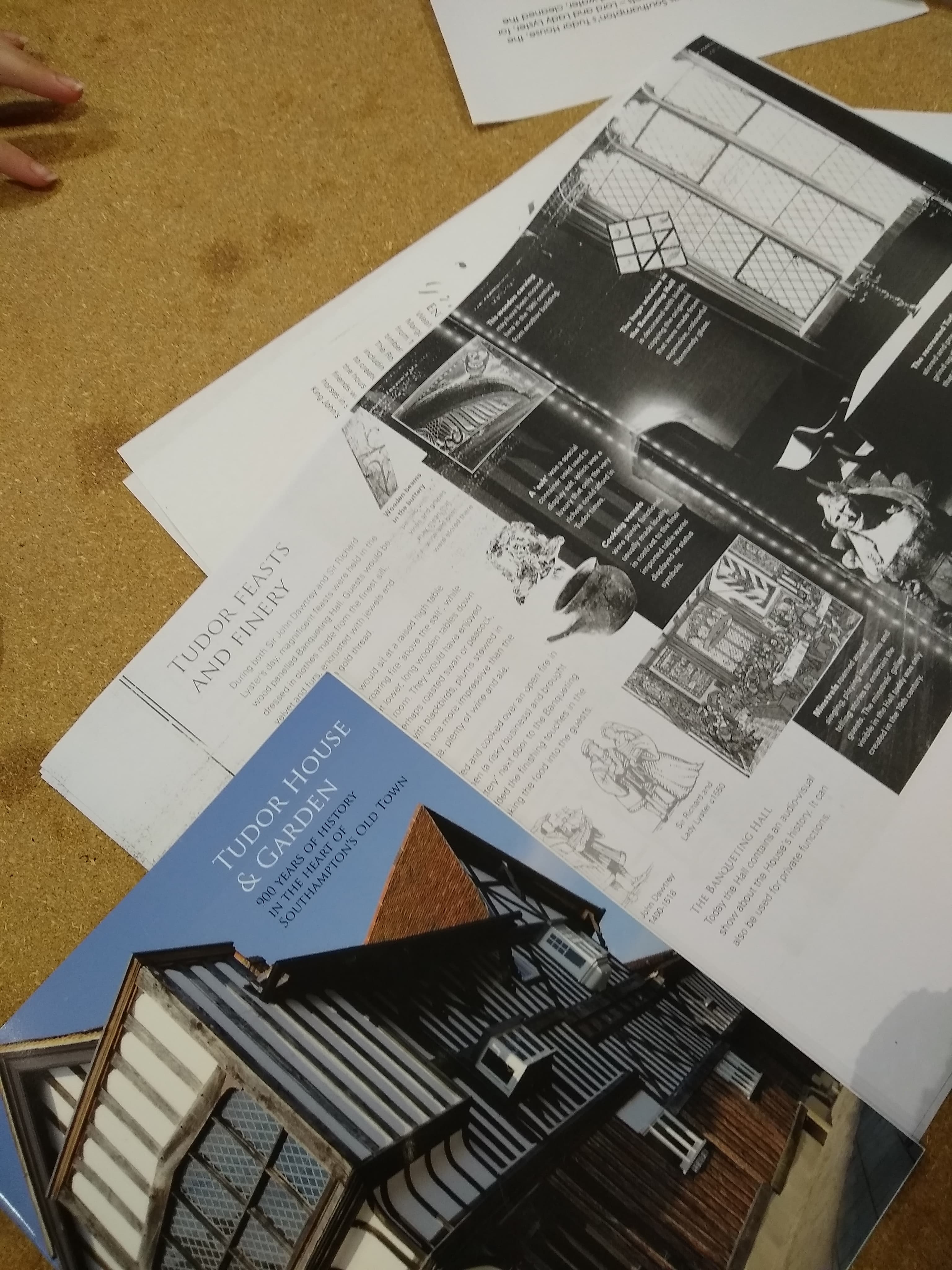 This week, our Young Writers started on their pieces to be performed at the Tudor House on 6th April. The 11-14 year old writers worked on scenes in the kitchens, graffiti room, and rich room about the servants, seafarers, and merchants who would have worked, lodged, and lived in the Tudor House. The 15-18 year old writers began researching the owners of the House, Walter and Jane William and Sir John Dawtry, who will act as tour guides in April.

This week, we have some guest blogs from some of our Young Writers, discussing their visit to Tudor House last week and what they were working on in this week's session:

Last week, Young Writers visited Tudor House, We split into groups, and set off around the house, visiting places such as the graffiti room, the rich room, and the kitchens. This week, my group are focusing around the servants in the kitchens. We took information we learnt last week, to now write scripts for the Mayflower Youth Theatre group to perform, back at Tudor House itself. It's a really great project to be doing, and I'm glad to be having this opportunity. - Sophie

Last week, Mayflower Young Writers visited Tudor House and Gardens. We took notes about the place, the sorts of people that lived there, and what life was like there. There were lots of interactive experiences such as dressing up. I enjoyed the trip very much and learnt lots of new things about it. I look forward to writing about this trip. - Rohini

At our visit to Tudor House last week, we got a feel of the era due to the time we spent dressing up in Tudor clothes and exploring the different points. From our visit I have decided to base my piece on pirates, due to the extensive knowledge I already have from marathoning Pirates of the Caribbean over and over with my best friend, and the amount of time we spent looking at Tudor pirates in the house. I really enjoyed our visit.
This session, we spent a long time reading through extra information from the house on separate tables - servants, merchants, and seafarers. By complete coincidence I was put on the seafarers table. We then did an exercise on setting, and then planning, and plotting our characters and their stories. My idea has drastically changed from our visit to Tudor House, but I think the one I have now is better than satanic witch pirate cooks. -Bea

The trip to Tudor House was quite fun. I found out a lot more interesting facts I didn't know before. The stories about the ghosts and witches fascinated me most. I had fun dressing up in the tudor costumes. At the moment I'm working on a short play about a ghost and a person living in the house. - Nhu

This week, the Young Writers began by researching the owners of the House, and untangling the convoluted chain of re-marriages. They then used the Tudor House trail to structure their tours, from the Banqueting Hall to the Air Raid Shelter.

The Young Writers then split into three groups, each taking a third of the tour, and chose two characters to guide visitors through their section of the tour. They then had half an hour to write their draft scripts independently. The results saw Sir John Dawtry and Sir Richard Lyster trying to prove their love for their wife, Isobel; Walter and Sir John fighting over Jane; and Walter trying to convince his wife to join him in a movement against Richard III.

Next week, the Young Writers will be starting on their final pieces.