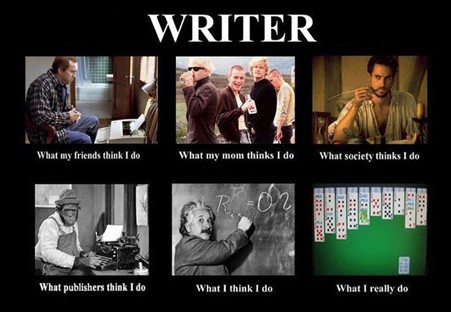 This week, we were writing self-portrait poems!

To begin, we looked at the (I'm told, now very outdated!) meme format (shown in the image above!) of providing six different images of how six different people in your life see you (from family, to friends, to teachers, to yourself), for comedic effect!

The young writers were challenged to write their own memes for how they imagine different people/groups see them – but instead of pictures, they had to use words to describe the images/objects/animals/things that those around them might see them as, in the form of metaphors!

For example, different people might see you as things as various as a lighthouse, a dragon, a shooting star or an ice cream!

For example: My dog sees me as a happy giant with a pot of gold.
To my friends, I am a bubble – bright and laughing, and easily burst.
To my brother, I am a jack-in-the-box – always popping up at the most annoying times, with my most annoying jokes!

Here are some far better examples from Safir!

My friends see me as a radio, sounding away.
My apple sees me as a traitor, betraying our friendship.
My carrot sees me as a cannibal, eating it away.
My family see me as a phone alarm, annoying them whenever  I want.

After sharing some of these 'poetry memes', we then looked at a poem which came third in the recent Young Poets Network Fairytale Challenge - a poem by a young writer called Ellora Sutton, entitled 'Self Portrait as Rapunzel, in which the tower represents grief'.We looked at what we liked and/or were interested by in this poem and then, taking this title as inspiration, the young writers were challenged to think of a character from a book, film, fairytale, myth, play or other form of story which they felt shared some overlaps with their own life or feelings, however loosely.

After deciding on their character, they then wrote down three things about this character or their story which they saw as overlapping with their own life/personality/outlook/feelings/dreams/ambitions etc.

They then thought about the symbols/images/objects/colours/settings of this character's story - what could have potential as a metaphor or symbol for something in their own lives? Like Ellora Sutton uses the tower in Rapunzel to represent feelings of grief, what could objects/images in your chosen story represent? If there were many intriguing objects (e.g. in the legend of King Arthur, you have the sword in the stone, the round table, the lady of the lake, Camelot, Excalibur, armour, the holy grail, etc) which might be particularly important? Would one in particular make it into the title/framework of your poem?

Some examples I gave were:

Self portrait as Cinderella, in which the glass slippers represent fitting in at school

Self portrait as Superman, in which the cape represents creative writing

Self portrait as King Arthur, in which the sword in the stone represents…

Self portrait as Harry Potter, in which the invisibility cloak represents..

Self portrait as Medusa in which the snakes represent…

Finally, the young writers were encouraged to think about how they might set out their poem on the page to reflect something about the story - e.g. in Ellora Sutton's poem, the shape of it on the page almost looks like a tower in itself. Would the poem take the shape of the image/symbol chosen from your story? Would it be all in one block or more fragmented? Would it have a rhyme scheme/strict structure or be more fluid? How could you go about merging your own voice and experience with the voice of the character? What are the overlaps and how could this character become a sort of disguise, allowing you to talk about yourself in a subtler or more interesting way?

Finally, we put all this together into our poems. Thomas wrote a fantastic piece as a self portrait as Icarus, with his magical but melting wings. Safir returned to the apple from his meme exercise, who was reimagined as King Apple, pulling a sword from a stone! Elsie took the character of Lizzie Bennett from Pride and Prejudice, in a lovely poem about not having to fit in, which was as much about Lizzie's love for her sisters as for her love story with Mr Darcy, and Kira and Helen both took Harry Potter characters, with Hermione Granger and Luna Lovegood respectively! Evie meanwhile saw the similarities (and a few important differences!) between herself and a giant panda!

They were all brilliantly creative pieces, providing interesting ways in to writing poetry about the self - we will look at some other approaches to this in future sessions!