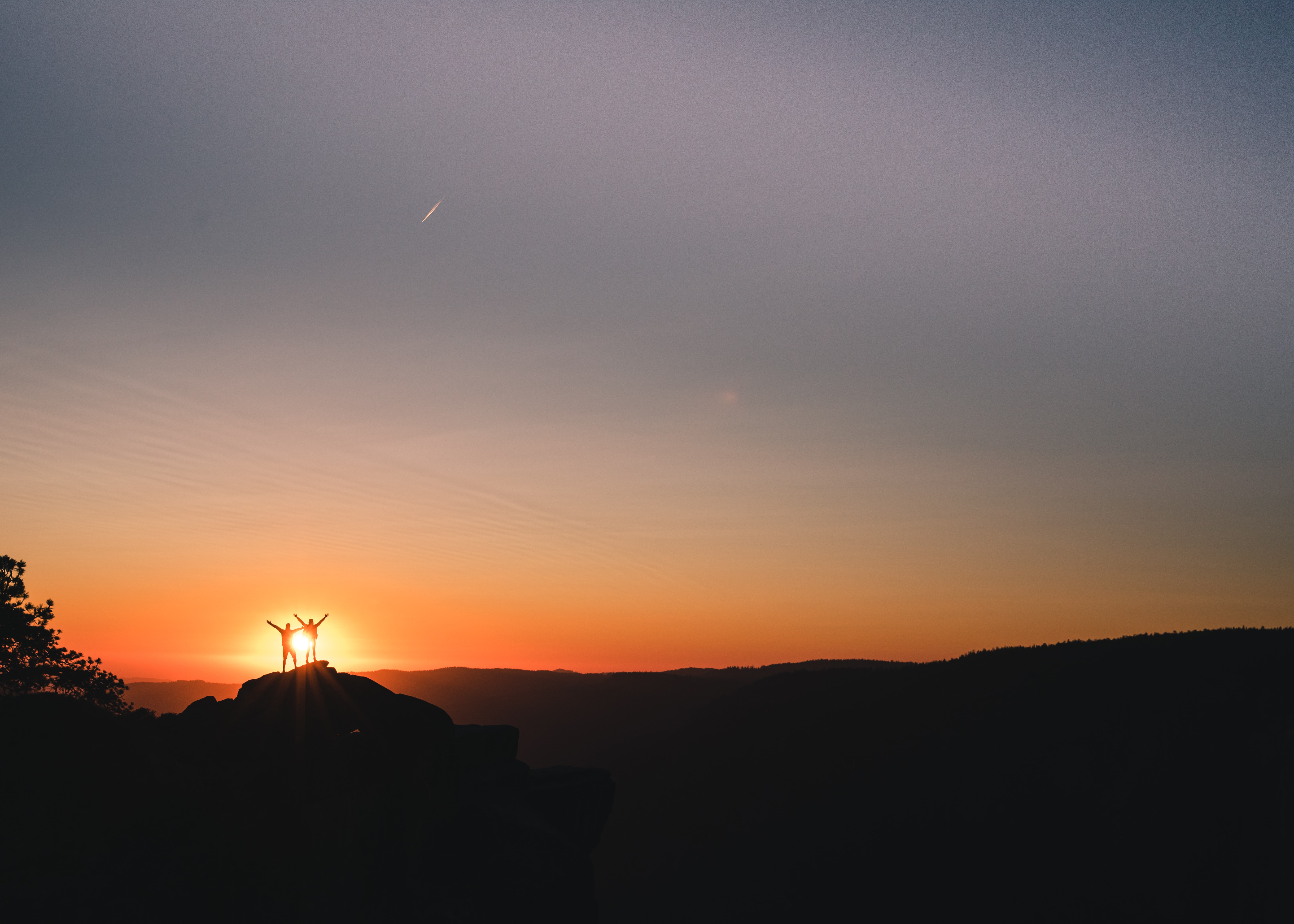 This week saw the 46th President of the United States inaugurated accompanied by Lady Gaga singing the national anthem, Katy Perry belting out one of her classics to a firework show, and National Youth Laureate Amanda Gordon performing her poem ‘The Hill We Climb’.
We weren’t the only one’s to think of looking at such an influencal young poet. Shani and Gene both have homework to write poems under the same title.
To kick off we watched The Hill we Climb, focusing on the emotions it evoked and the body language Amanda Gordon uses whilst noting down any lines that particularly struck us. We welcomed Max to group 1 this week who started out with a strong statement of 💪. General consensus was that it felt meaningful, inspiring, and that we were invested. Her movements were expressive, when she gets to the titular line she finger-walks up her other hand, she gestures a dagger and a bridge and uses her actions to encompass the audience.
Gene pointed out the line  opening lines:

When day comes we ask ourselves
where can we find light in this never-ending shade?

The poem bookends this image by finishing with:

This becomes a call to action for us all, American citizens especially, but it is always hopeful even from the start because it it doesn’t contrast light and dark, instead the imagery of shade is used and there can only be shade if there is light.
Amanda Gordon’s poetry isn’t the only inspiring thing about the 22-year-old, as we saw as we watched a CBS interview. She was named the first ever National Youth Poet Laureate at the age of 19 after becoming Los Angela’s Youth Poet Laureate at the age of 16 and growing up suffered from a speech impediment, just like Joe Biden. She credits poetry for giving her a place to put her words, and when the need came to breathe life into them, spoken word helped her work on her speech, along with singing Hamilton’s Aaron Burr, Sir, full of the letter R which was her main struggle.
Before she performs, she has a mantra ‘I am the daughter of Black writers. We are descended from freedom fighters who broke their chains and changed the world. They call me.’ It’s important to know where you write and perform from and this mantra highlights that - it also had me humming Moana for the rest of the day.
Taking our favourite line, after reviewing the poem in written form, we created our own poems with her line as our starting point.
Group 1 then wrote a poem of thanks or observation about a current happening, whether that be political, social etc. With a focus on how it was personally impacting them or more generally, what message did they want to put across? Just like the message of progression and unity that Amanda Gordon used.
Group 2 worked on an experimental ‘How to’ poem. The first of two stanza instructs on a simple everyday task that is often overlooked and the second twists the poem to give it a bigger message, such as how to run a country. Susmita wanted to see how these two would link, how the turn of the poem would be handled. Izzy used metaphor throughout, and Hannah created a call and response singular stanza piece.
As Amanda Gordon says, poetry is a weapon an instrument of social change that by its very nature is disruptive because of how you rupture and destabilise the language you’re working with. Our young writers did well with this disrupting concept and I urge us to continue to be disruptive with our words. Maybe one day our words will reach millions just like Amanda Gordon, representing people like the UK’s own Young People’s Laureate for London, Cecilia Knapp. Maybe as part of Southampton’s 2025 bid for City of Culture we’ll find ourselves with our own regional Youth Poet Laureate; who knows? And perhaps that voice will be a face we recognise. 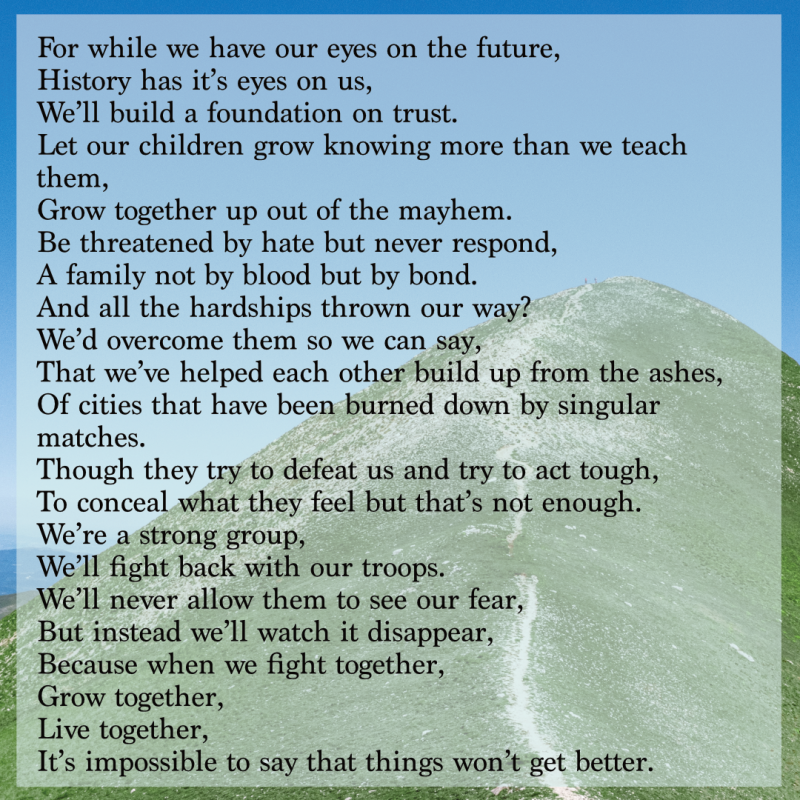 Amelia's poem of thanks on a current topic 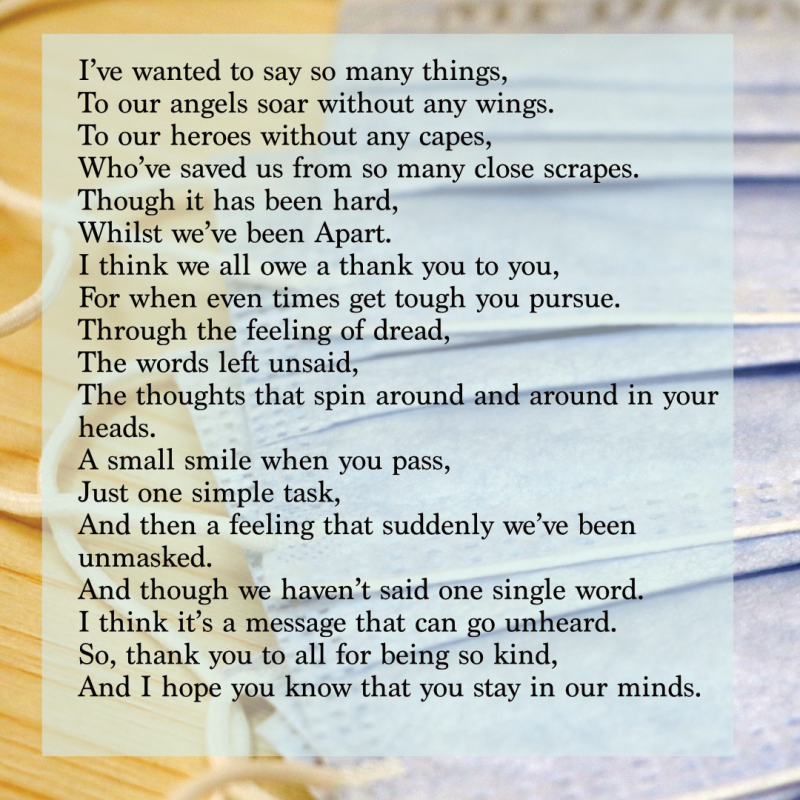 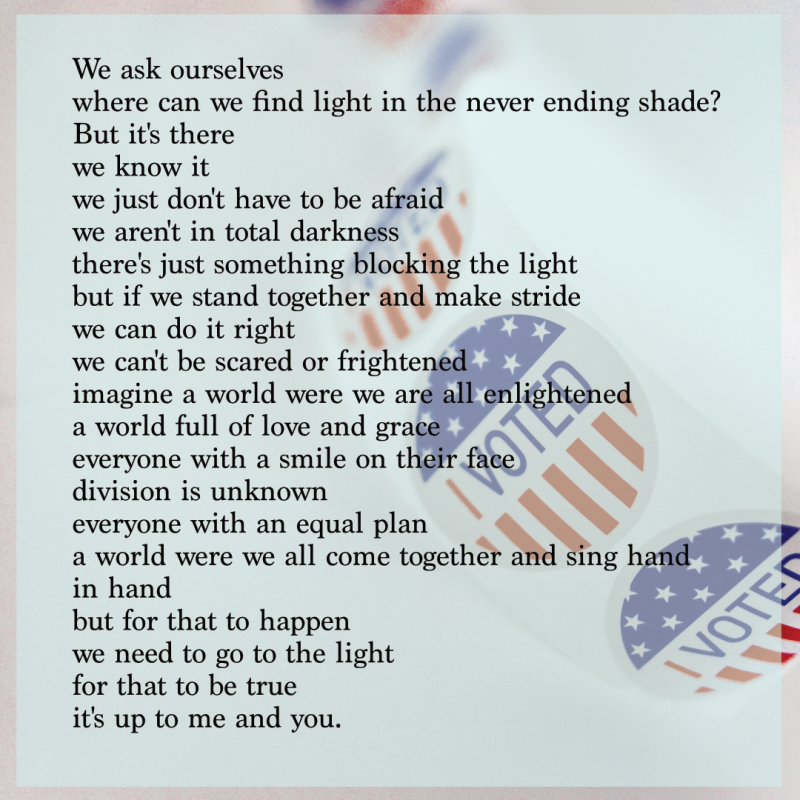