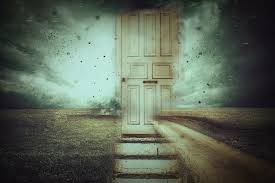 Our group times have changed.

We now meet at The Henry Brown Centre, in West Howe, on Tuesday, from 10-12 (during term-time only)

When the door opened the lively conversation

Beyond it paused very briefly and then pushed on;

There were sounds of departure, a railway station,

Everyone talking with such hurried animation

The voices could hardly be told apart until one

Rang in a sudden silence: ‘The word when, that’s where you start’–

Then they all shouted goodbye, the trains began to tug and slide;

Joyfully they called while the railways pulled them apart

And the door discreetly closed and turned from a celestial arch

Into merely a door, leaving us cold on the outside.

Today’s session started with a read through and discussion of the above poem, ‘The Door’ from Eiléan Ní Chuilleanáin’s collection “The Sun-fish”. It’s a short poem, two five line stanzas but full of the ‘tug and slide’ of beginnings and endings.

We discussed what the door was opening on to; in the concrete sense we have a scene at a railway station, perhaps a waiting room, where the ‘pause’ and ‘push’ of conversation and ‘hurried animation’ gives way to ‘sudden silence’ and then on to joyful goodbyes; in a more abstract way the group talked about how the door could be opening onto a dream world, or perhaps offers a glimpse at creativity, or imagination – there is certainly something in the ‘celestial arch’ suggesting that there is more behind the door than first meets the eye.

I’d also brought in a CD of forest noises. The idea of our writing exercise was to ‘open the door’ and respond to the sounds of the forest. We spent a little while exploring how we might describe the forest using the five senses and also how we might recreate the ‘push’ and ‘pull’ we see in the poem. For example the quietest sound of a spinning leaf falling from a tree might play against the loud calls of birds.