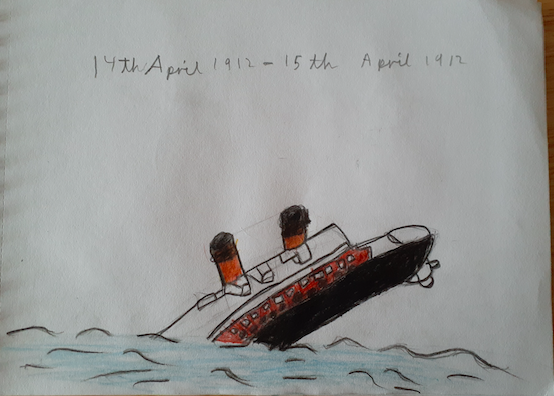 The Titanic sailed from Southampton towards its destination in New York on 10th April, 1912. There were 2223 passengers on board this 'unsinkable' steamship - the largest in the world at the time. Unfortunately she never made it to New York. She crashed into an iceberg in the Atlantic Ocean and sank into the depths of the ocean.

We imagined who were sailing on this ship: in the first class, the third class and the crew. We wrote the distress signal S.O.S. (Save Our Souls) in Morse code:

We also wrote acrostic poems for the titanic and wrote diary entries from the people on board. Here are a few of them:

It started on 10th April at midday and could carry 2223 people at a time, it sailed for four days until it came to an end.

All of the sudden the lookout shouted Ice berg ahead of the ship, but crew was unable to manage the Iceberg

Nobody knew how this disaster happened and now their lives are in danger and they can be sacrifices.

Immediately the captain shouted for SOS from radio when it hit the iceberg as large as Mount Everest.

Creative musician played music to relax the people on board and stopping them to run around.

Suddenly, water started rising in to the ship from the right hand side as the ship started sinking.

In the meantime rockets were launched to create a signal for exact location for other ship to know.

Now they decided that they will give first preferences to let the women and children go on the lifeboats.

Kids are fearful and crying as they think they are going to lose their parents and grandparents on board.

Seeing the Carpathia (Helpful ship) the captain and the left over people on the ship secured.

Always check the safety measure for all commuters from the Titanic if they all are safe.

Time is very less and we have to cover 58 miles to save the gigantic ship.

Help! Help! People are shouting as the captain of Carpathia can hear them from near by

Immediately the trained crew members of Carpathia transferred the passengers from lifeboats to the ship.

And we manage to save 705 lives by taking an action as quick as a flash.

What a mesmerising day it has been yesterday on the 14 April 1912! 4 days ago, we set off from a beautiful English costal town, Southampton in a colossal ship named RMS Titanic which weights as heavy as 550 blue whales.

On the 10th April we reached Southampton docks to sail to New York in a gigantic ship. There were three sections on the ship. Third class one was for the poor people, the second class for the middle class and the first class was for the rich people. There was setup for live music to entertain the passengers on-board.

There were five lunch rooms with a variety of food from all over the world. There were two swimming pools for the first and the second class passengers. There were even exciting games in a separate game room. I made friends form different cities of the UK and played with them every day.

At around midnight of 14th April, an unpredicted event happened. “On the upper deck everybody!” screamed the ship Captain Harry. While everyone came they were confused what was going on with the massive ship. As everyone gathered on the deck we could see lifeboats were ready to be deployed. Captain Harry shouted “Women and children will go first in the life boats.” The captain signalled the “SOS” message for the other ships for rescue. People started getting panicked and started running around.

The ship captain ordered to play live music on the deck to distract them from the situation. At about 1:30 it was my turn to go onto the lifeboats. A ship named Carpathia, came to help us at 2:00.We sailed to New York in the new ship safely. Later we were informed that the largest ship of that time had hit a huge iceberg and sank at the end. It was gloomy end of the journey.

It was a disaster

There weren’t enough lifeboats for people to escape

Anyone who stayed on it would’ve died.

None of them survived (mostly)
I was shocked

Can you believe it?

T itanic was
I ncredible but also
T errifying. There
A re many
N ovels about
I t. It was
C olossal at it's time.
- Diptanshu 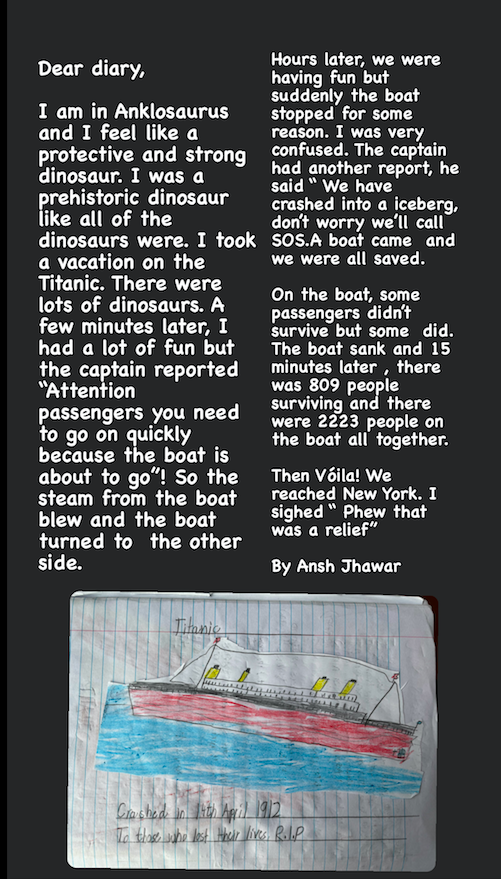