This week our young writers had the task of writing short stories set somewhere in The Lighthouse. Poole Lighthouse is a beautiful building with many inspiring rooms; the orchestra room, theatres big and small, tech boxes, rehearsal spaces, bars and a cinema.

However, the room that sparked the imaginations of a lot of our young writers was in fact...Function Room 4. A windowless box that sucks the ‘fun’ out of any function.

I wake up in a room I have never seen before. At first my vision is overwhelmed by the sea of grey surrounding it, the colour of paint covering all of the walls. I don’t remember where I am, or how I got here, but then I recall the whispers shared between fellow writers that have shared this space for many more years than me. The name of it has stayed in my mind, paired with haunting descriptions, and I can only be sure of where I am from looking around. The low, panelled ceilings, the kitchenette, the cold, bare walls - I am in Function Room Four.

I try to stand in this cramped room to look for any way to escape, with the room having no windows and only one door. When I reach for the door, and try and try and make the doorknob give way, but it is hopeless; I have been locked in. Who knows if I can escape? Maybe my only friend in the time leading up to my demise will be the sink behind me. 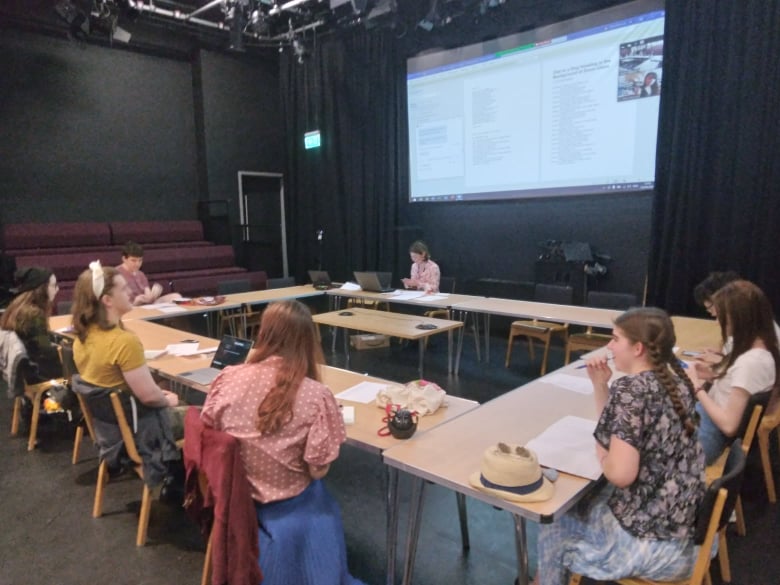 Although function room 4 was not mentioned by our younger group, their imaginations still went to some dark places (just not windowless this time.)

We had ghosts, evil magicians and a pasta stealing vacuum cleaner.

The ghost of the Lighthouse

10 years ago,a fire set alight on the main stage in the lighthouse.The show that was on at the time was Cinderella.The song Bibbidi bobbidi boo was playing and the actors were dancing,that was until someone in the audience broke the rules.Foolishly,a man called ‘Thomas Wilson’ decided to have a cigarette in the middle of the song.Soon enough,the cigarette fell to the floor setting alight to the chairs on his row.

The whole room evacuated as the fire spread vigorously.Only one actor remained in the room unconscious. ‘Mary Tingthob’ lay on the floor fire nearing towards her.Unluckily,she had asthma and fell unconscious as the smoke began to thicken minutes earlier.No-one could save her….Not even herself.As she lay there lifeless,the fire consuming her she opened her eyes only to find her burnt body in front of her.That day,she gave herself a new goal.To take vengeance on the theatre that took her life.

Ever since that fateful day,strange things have been happening.I should know...I saw them happen.My name is Emi Carswell and I am the technician for all the shows played in the main theatre.My best friend was Mary,she wasn’t the sort of person to cause harm to anyone.Yet I no longer know her.Every year,we play a show on the same day she died but every year something goes wrong.It is no coincidence in my eyes yet everyone believes I am the one to blame.

It isn’t very fun being a technician,there is always something I’m doing wrong.Sometimes I understand why Mary took vengeance on this theatre.My eyes swell with tears when I think of that day knowing that Thomas was the reason I lost my bestfriend.MY OWN COUSIN!

People say vengeance shall take over those with a weak mind.But Mary was not weak...She was stronger than anyone knew and had to die for that.Something no-one knows about that day,is that she died because she evacuated everyone else.If she had a weak mind,she would have saved herself.So I have decided this year I shall play the part of Cinderella in the show.I will take Mary’s place as the main role.And I WILL make Thomas and the rest of the backstabbing traitors I work for pay for killing my best friend!

Mary has made being a ghost seem fun.Every year she haunts those who enter the Cinderella show and laughs at their fear.Once she talked to me...She said that no matter how much she wanted vengeance,she would always be the same person I knew to me.That day was the best and worst day of the last 10 years of my life.I still ask myself “Why did it have to be the 18 year old girl who played the role die?” alas only god knows.

The young writers have also been given an exciting commission by Dorset Magazine to create some short pieces for a future issue. Next week we will find out what Dorset themed ideas they have been coming up with.