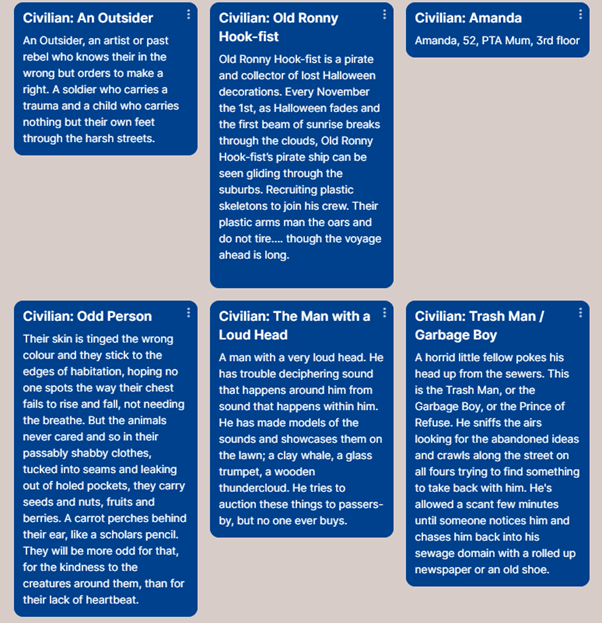 Get the moving vans ready, because this week the neighbors are moving in! This week we are populating our composite town, neatly contained in the collective Padlet.

The first task for today is to begin thinking about the types of people that would live in the places that we’ve constructed. We are tasked with designing characters, asking ourselves who would live in these places? How can we boil an environment down into a living, breathing, person? Drawing from Olga Tokarczuk’s piece ‘Abandoned Apartment’ from Flights which features a place with sentience describing itself, we begin to think further about how a place can be described. Having now entered our characters into the padlet, we take one another’s characters and write about the kind of spaces they would inhabit. What does a place become with the pressure of a consciousness? A diamond or a piece of coal?

In a contrasting task, we read Tokarczuk’s piece ‘Guidebooks’, in which she offers that once something is observed, known, or once it is “described”, it is destroyed. I guess there goes the neighborhood?! A particular dilemma for the writer is the idea of never being able to exact a place, an emotion, an event, with description on the page - but the dilemma is arguably a struggle for anyone trying to relay a story of any kind.

I’m going to throw a left field analogy in here - as we are wont to do with free flowing pop culture references in our discussions here at MAST Collective - it reminds me of one of the core themes of the hit Netflix adult cartoon Bojack Horseman; that to be truly known is to be unlovable. As Bojack says to his girlfriend Wanda upon her exclaiming “What happened?” at their break up “You didn’t know me, then you fell in love with me. Now you know me.” In this sense a place isn’t really a place until it’s observed, it’s just a figment, an idealised version of itself that we can pour our wants and desires into.

Once populated and observed can a town experience the mortifying ordeal of being known? Perhaps this will be an enduring dilemma for the collective as they continue to develop this collaged town.