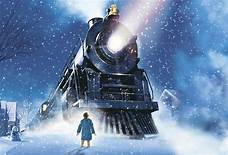 This week, we began by working on the collaborative group poems, looking over what we have so far, making any amendments, and coming up with a title (thanks Charlotte!)

Next, following on from last week's train poem challenge, we were working on stories set on a train! To get inspired, we looked at extracts from three great stories set on trains - Murder on the Orient Express, by Agatha Christie, The Polar Express by Chris Van Allsburg, and The Wolves of Willoughby Chase by Joan Aitken (kindly read for us by Hiba!)

Inspired by any or all of these stories, writing in any genre (thriller, mystery, romance, historical, fantasy, sci-fi, comedy, etc), the young writers were challenged to write a story set on a train.

The train can be going anywhere in this (or any!) world!

It can be set in the present, past or future.

• Why are they going on this journey?

• What mysterious or exciting thing could happen while they’re on the train? Perhaps the train gets snowed in/stuck somewhere, as it does in ‘Murder on the Orient Express’. Perhaps something comes flying in through the window, like the wolf in ‘The Wolves of Willoughby Chase’. Or perhaps it’s all about the beauty and excitement of the journey and the destination, like in ‘Polar Express’.

• Try to use as much descriptive detail as possible to bring the setting of the train journey, and the landscape they pass through (or stop in) to life

This led to a great sharing and feedback session (even featuring some recurring characters, including Evie's Soundman Dave, George's Rimor, Thomas' monks, and Safir's Dumpster Diver Dan!)
Next week will be our final session of the term and we will be doing some Christmas-themed writing challenges! See you then!
PreviousNext