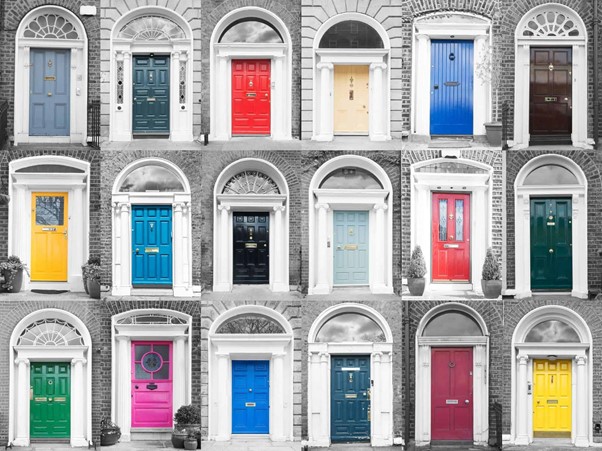 This week, we were continuing to look at characters.

Who lives behind this door?
Are they alone? Do they live with others?
How old are they?
What’s their name?
What do they do for a living?
How long have they lived here?
Do they enjoy living here?

We then did a 5 minute free-write, imagining what the inside of this person's house might look like -

how many rooms?
How tidy/untidy?
Any weird things they collect/unusual furniture/objects?
Pets?
Colour schemes?
Background noise?
Would it fit any stereotypes about them as a character, or subvert them?

Next, we shared the description of these characters (or at least their names). For the next stage, everyone picked someone else's character to be their character's neighbour on our imaginary street...

Have they ever met?
Have they just moved in?
Do they get on?
How do they interact?
We used this to write a scene/start of a story with an interaction between these two neighbours!

“Excuse me! Mrs Bellpocket!” Guinevere turned around to see Mr Harrison running towards her, jacket trailing in his panting strides. His footsteps grew in force as they slowed, and he stopped, red-faced, in front of her.

“Pastor Harrison, to what do I owe the honour?” Guinevere asked, taking in the tomato that gasped for air and his beer-bottle jacket. Everything about the pastor seemed to be green; even his services and the church, however small it was, was always filled with fresh flowers and plants. He wore that same emerald-coloured suit into mass, into prayer and into the organ room where he played atrociously. However, his personality more than made up for the shoddy hymns that floated out of those heavy wooden doors every Sunday, so the town loved him anyway.

He righted himself and grinned, his white teeth shining in the sun. “I wanted to give you this file that you asked for. I had to jump through a few hoops to get it, but it should help you immensely.” He handed her a thick yellow-card folder almost bursting with white and pink papers, which she took with some trepidation that it was all going to burst. He ran a hand through his wet hair, and immediately regretted it, wiping it on the corner of his gleaming suit. “It’s the Barclay’s Records on Aleksander Hilton, as you requested.”

Guinevere’s face lit up in understanding. “Oh, of course! Thank you ever so much pastor, how could I ever thank you?”

Pastor Harrison’s face darkened. “You can thank me by finding the man who killed Aleksander. He was a good friend of mine, and I would hate to let the criminal responsible get away. I’m always happy to help a friend when she’s solving a murder anyway.”

“How are you holding up anyway, James? I feel like I haven’t seen you in ages.”

The man rubbed the back of his neck, letting it crack a little before his hands dropped to their respective places at his sides. “Oh, so-so. The weather is starting to get too hot for this jacket, and it’s starting to make me sweat a little.”

Guinevere scoffed. “I’ll say, you look like you’ve taken a dip in the Leisure Centre and forgotten to dry yourself off.” The man laughed, subsequently dripping from his short nose. Guinevere stifled a snort.

“It was lovely to see you Guinevere, and good luck with the case!” the young main yelled as he ran off towards the church, where the bells started to moan loudly. His black shoes struck the grey tarmac like meteor impacts, and he skidded around a corner with arms flailing. The lady grinned as she waved at the rapidly disappearing man, then chuckled as she turned to take the heavy files back to her house. They were Barclay’s user information files, that Mr Harrison could access since he used to work there and all of the managers there love him. Guinevere shook her head as she heard a yelp in the distance, laughing enthusiastically as the pastor must have, again, skidded into the tree outside the churchyard. The man’s door was as green as he was as Guinevere passed it. She stopped. Something caught her eye. In his haste, the pastor had forgotten to lock his door or close it, and it was slightly ajar. How careless of him. The old lady stepped through his rusty gate, and over the threshold of his arboreous house, and was immediately hit with the stagnant stench of blood.

And here is Leo's:

Jeremy Hingefield hadn’t returned to the 18th century countryhouse ,Glaneton Hall, he inherited from his late father ever since he set off in search of the monocle for the first time in the Greek’s lost dimensions, but that was no less than twenty-nine years ago, and though he had told his maids and gardeners to keep the property livable, he hadn't the slightest idea of what had been going on around his manor, as he would never accept that these smartphones and other ridiculous devices existed. As he rolled up the driveway in his horse pulled carriage, he saw that his wife, Henrietta Hingefield, and two children, who now seemed about thirty. But there was also another pair of people, a smartly dressed man wearing an elbow length cape with a long collar, a top hat, checked wool trousers, and a lady with a long flowery dress and white hat.

He jumped gracefully from the carriage, and to his family he said “Hello my dears, but first, who are these newcomers?” he asked, surveying the two people

“We are the Marchbushes, we live not 17 miles away, in Offling Manor, but I must say, your residence is certainly much larger.” said the man

“We just came to greet, but I think we’ll come another day, it’s just that we moved in fairly recently and wanted to introduce ourselves. Well, we’ll leave you to it.” she added, and with that, they left into the gleaming black limousine, driving away.

And here's an anonymous piece, with a mysterious interaction with 'The Stranger'...

“I don’t understand.” The Stranger said.

I gestured to the rain around us, soaking through the stranger’s black hair, pelting against my hood and clogging up the gutter for the third time this week. I really needed to get that fixed.

“Rain?” The Stranger looked around, holding their hand out, letting droplets run across it.

“Yeah, rain that’s what… I meant… anyway! You’re moving in next door right?”

“I am yes, I live here now. Temporary of course, as is with everything in this universe.” The Stranger chuckled.

I paused before continuing.

“Well, even if it's only for a short time I should introduce myself right? I’m Barry.” The Stranger nodded at this, like a detective having a suspicion confirmed. “And you are?”

They puzzled for a moment, as though they hadn’t expected to need a name.

Then: “I’m-” before I could catch their name a taxi cab drove past, blaring its horn at a cyclist running across the street and further soaking the Stranger, who was not wearing any sort of coat suitable for this weather.

“Ah lord, we should get you in shouldn’t we.” I said, as they lugged a suitcase I’m sure wasn’t there a second ago. “Don’t worry, I can help.” I rushed to grab the suitcase, I needed to know the Stranger, I don’t know why, I just needed to.

They didn’t refuse my help. And carried in a large bag slung across their shoulder, I’m sure they didn’t have that a second ago.

Up the stairs and through the door, we stepped into their house. It was dark, musty and dust clung to my soaked clothes.

“Sorry, I didn’t quite catch your name.”

“Rimor J Hemslock” They said like it was the kind of name that evoked a strange nostalgia when others heard it. And it was that type of name, I’m sure it wasn’t there a second ago.