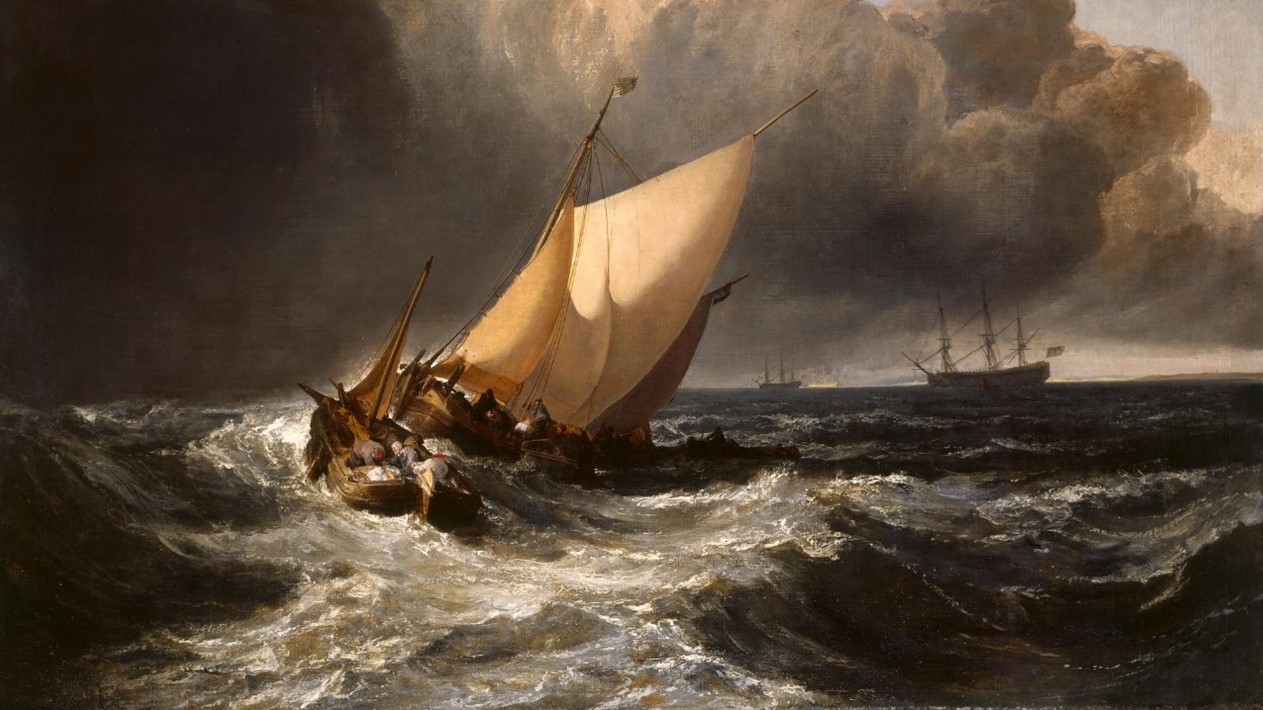 This week, we began by looking at two paintings - including the one pictured, Turner's 'Dutch Boats in a Gale', and Rembrandt's 'The Storm on the Sea in Galilee'. We imagined we were someone in one of the paintings, in a ship in a storm out at sea - we thought about what we could see and hear, and how we would feel. The young writers each wrote a short description...

I can see waves towering over me, I can feel the cold winds
of the atlantic ocean, I am scared out of my skin and my friends and family are
all bundled up in sheets and blankets so that to keep warm, I also smell the
dreaded sea salt in the air around me.        By Lola

Water slapped me in the face as the wind swirled and
howled.The stench of sea salt and fish invaded my senses.The heart pounded in
my chest,my breathing slowed as the waves crashed onto the boat.The sky was
darker than I had ever seen.The sunshine smiled at me from far away.The water
was rough and dangerous yet clear and beautiful.The sound of screams,waves and
thunder rug in my ears as a wave demolished the boat I stood on.            By Annie

The storm surged as the boat tilted. Large waves gushed over
the deck. specs of water vapour flew into the air. The sky closed. The last
hole was gone.            By Safir

Sea waves crashing upon each other,
Sea water overflowing our boat,
Drenched, trying to get out of the swarm,
The foggy skies not able to guide our ship to safety
The swarm was that big it was beyond the sight from eyes
Every seven seconds a beam of light will shine across
Still not able to see nothing was able to be seen with my
eyes
Not being able to think they keep pushing forward trying to
get to safety
Just being able to see a slight red and white striped tower
As they get closer they realize what it is
The only problem is, is that
There getting close to a cliff side                By Jake

Next, we continued these descriptions, but now the character spotted a lighthouse in the distance...

Quickly,I grabbed onto the remains of the boat and drifted
off into the distance.Hours later,the glow of a light appeared in the distance
that i could only just make out.Grabbing a piece of wood,I rowed with all my
might to get closer to shore.As i got closer,a huge red and white lighthouse
stood before me.It was surrounded by a gorgeous field.No stains were found on
the bottom this made it clear the owners liked it smart.Closer and closer I
became,until a voice called out “Are you okay?!”.It seemed to be a boy who was
calling out so I shouted “Yes!But some help would be appreciated.”.Before I
knew it,The boy was in a row boat nearing towards me and so I stood on my raft
and waited for him to help me into his boat.            By Annie

A foghorn sounded, the storm didn't stop. There was another
boat here to help us. That boat never came, it wasn't a boat. The storm was
still going further in to the horizon. there was a large lump. An island? No.
It was a lighthouse.        By Safir

the waves push us around in the stormy water. lightning
strikes the sail sending it up in flames, imediatley the boat splits apart separating
me from my family. i cling onto a piece of driftwood from the family boat, i
was on my own. i had lost all sight of my family, i fear that they are still
out there, but as i panicked i heard the clear sound of a fog horn.i was saved!        By Lola

Next, in the younger group, we read the opening of Eva Ibbotson's 'The Island of the Aunts', looking at the very intriguing characters and settings - and the amazing opening line! Meanwhile, in the older group, we read (and had dramatically performed for us!) extracts from the opening scenes of The Tempest, where the storm begins on the ship, and then the following scene, where Miranda looks out and sees the storm happening and begs her father, Prospero, to make it stop.

Rain hit the wall of the lighthouse as I tried to
sleep.Thunder rang in my ears and the smell of sea salt invaded my nose.I
jumped up from my bed as my window burst open letting the wind and rain come
into my room.Shutting it quickly,I looked down at the sea to find a small raft
floating around.As it got closer,I noticed that someone was on the
raft.Quickly,I ran upstairs and turned on the light that was only repaired that
afternoon to guide them to safety.After about 5 minutes,I couldn’t wait any
longer and so I sprinted down to the bottom of the lighthouse. “Are you
okay?!”I screamed at the top of my lungs.The raft I saw,was what seemed to be
the remains of a boat as it was only a couple of wooden planks with a pole in
the center. “Yes!But some help would be appreciated.” called out a soft voice
of a girl.As quick as I could,I jumped into the closest row boat and used all
my might to get to the raft as soon as possible.            By Annie

Caliburn awoke from a sudden growl of thunder, he looked out
of the small round window and saw a small light in the distance. he awoke his
companion, Rooh.
"what's the matter?" asked Rooh
"there's..a boat coming towards the lighthouse"
caliburn flew through the open window, and into the storm.
he spotted a little boy on a tiny wooden boat. Caliburn was quite a large bird.
so he plucked the child out of the raft and got him to safety, trying to ignore
the child's screams.
"h-hey I was doing just fine" said the boy,
rubbing his nose
"would you have rather drowned?"            By Jasmine


The sailor knocks hard on the dark wooded door. He sees a
man through the window. He knocked more. The door opened. "Hello? why are
you here?"
I have been in the seas trying to reach some land away from
the storm."
"Oh ok come in."
His wooden taped chair was in the room. A smashed chandelier
up the middle of the spiral stairs. A door lead to the basement. The man got a black thing out of his pocket.
"What is that?" The sailor stammered.
"A gun my friend. Your fate."
A gunshot went. The sailor wished it was the foghorn. He
descended don the spiral steps of the lighthouse, his body taken to the
basement.            By Safir