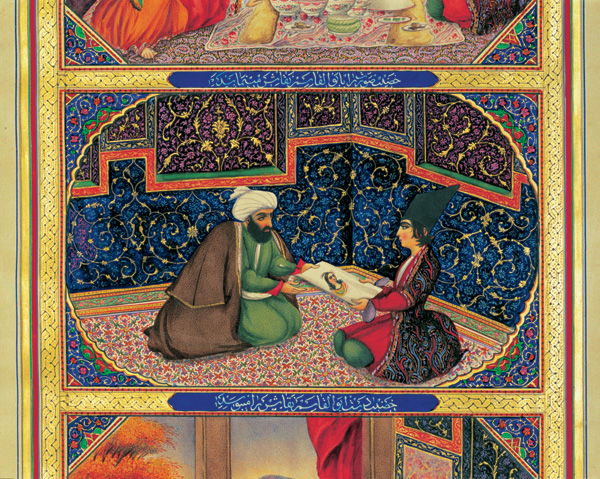 To begin with, the young writers were asked to consider two questions:

2) What does a storyteller do to make the story? What verbs (doing words) would you use to describe the action? (e.g. weaving,  painting, embroidering, baking, building, cutting and
sticking, swimming, climbing, dancing, composing,  knitting, sculpting?)
After sharing some of our ideas, the younger group looked at an example poem, 'The Storyteller' by Mike Jones, exploring the different ways he describes the work of storytelling and storytellers. The young writers then started work on their own poems about storytelling, aiming to use as many unusual metaphors and as much original imagery as they could. Here is Evie's excellent poem below:

Stories are treasures to keep,

Stories are there to be told,

Stories are made from ideas,

Stories in books can be sold.

They’re yours to keep,

You can read the story,

But you’re not the original

Storyteller who wrote this book,

A story is a way to escape,

For if you can’t cope,

A story if told right,

Will give you a sense of hope.

A story is as old as when,

When in time it was written,

But goes forgotten when,

When it is hidden.

Stories are written by some,

Plays are seen by many,

So can you make stories more popular,

I’m going to need more than that penny.

In the older group, we looked at a couple of different poems about the work of writing and storytelling - 'The God' by Ted Hughes and 'The Work' by Martha Sprackland, exploring the very different metaphors and imagery and perspectives they used. The group then all started work on their own storyteller poems. Here is Thomas' mystical and imaginative poem:

A Pact of Existentialism

You’re sitting in the middle of a storm,

And you collect your gear, put on a helmet,

The water is colourless, not blue,

And the sky seems red with heat.

But beneath the fish

There are sunken shipwrecks of lost emotion.

You wander into the catacombs of a medieval castle,

And you grab the key the king gave you,

The contents is varied, jumbled,

And the value of it is low.

But beneath the coppers

You lie in wait for its eventual arrival,

Until it’s behind you.

And you bind your soul to the dagger before you,

Your blood is tasted, accepted,

And you feel hollow and dull.

Before the power fills you

There is absconded artistry in your lungs.

But you think that you know;

You know this cannot be true, why steal

Words that already belonged to you?

You know this cannot be true, why conceal

Words that never belonged to you?

Where did you think your ideas came from?

The bottom of the sea.

Where they once belonged to some unfortunate soul.

Where did you think your stories came from?

A chest in a castle.

Where they were once the prize of some unfortunate soul.

Where did you think your words came from?

Did you really think it would give you your own?

It stole yours years ago, for you to steal back.

After sharing a brilliantly diverse range of poems in both groups, we moved on to looking at the character of Scheherazade more specifically - recapping her story, which we had explored last week, the young writers were asked to consider these questions and prompts, to start imagining what it would have been like to be in her position:

What images come to mind when you think of Scheherazade?

(nights, darkness, moon and stars, a king, a palace, a wedding, death, executioners, her voice, her pauses/cliffhangers)

What did she sound like/what was her voice like?

What was she thinking? (about the King, about what would happen to her, about the stories?)

Did she have a plan?

How did she stay calm?

What could she see in her mind?

How did she come up with her stories?

The older group also looked at two example poems, both entitled 'Scheherazade' - one by Lucy Wainger, and one by Cia Mangat (who had won a challenge on the Young Poets Network with her poem in 2017 - inspiration for our young writers!)

The young writers then had an option to either:

There were, again, a beautiful range of sensitive, thoughtful, imaginative poems - many young writers in both groups had paid particular attention also to the form of their poems, with many also incorporating 'cliffhangers' or fragmentary structures to their own poems, to reflect Scheherazade's storytelling. Here is Thomas' below, with a particularly strong example of this technique:
Cut-Off
A statement is drawn, a point is woven;
A world is described in the sands of our storm.
Her eyes gleamed green, her voice so soft;
Her heart is described in the time she has lost.
His face is stone, his body relentless;
His heart is described in the wish to oppress.
A word is lost, no more are said;
Does the fate of the many reside in the-
Her words are fading, his hate so short;
What is the meaning of the love she has brought?
No more can be done, the last words above;
The future is sealed in the sands of-
When the manuscript ends, so does his wife.
But no more shall her stories devour her life.
From kingdoms afar, to kingdoms anew,
The words of the queen will gift hope to you.
So carry her loss, away in the storm;
And take on the words so heavily worn.
Wherever you wander, wherever you roam,
Always remember that your queen is-
Finally, we had some super good news to share with the group this week - one of our young writers, Rosie, has WON the inaugural Louise Rennison National Funny Award, in her age category, for individual comedic writing! What's more, her winning piece was written in a young writers' workshop over the summer holidays - so many writers from the group had already heard it and remembered how much it had made us all laugh! This is such a huge achievement - we're all delighted for Rosie and send all our congratulations for her success!