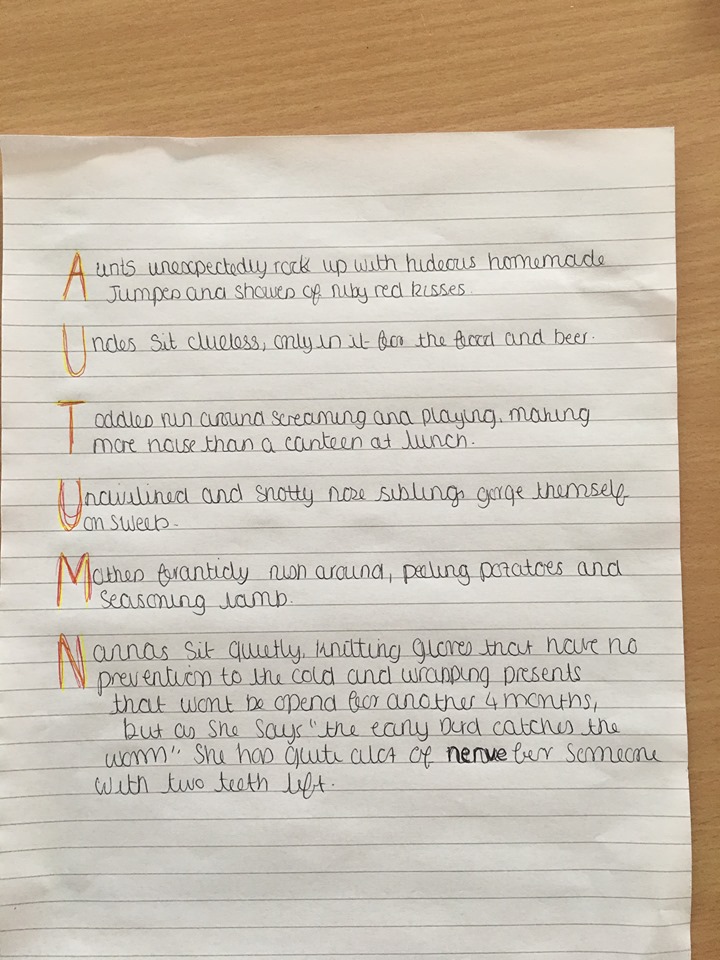 Sticking to the theme of Autumn, this week we decided to write poems!

To kick off the session, the young writers went around the room and stated what their favourite, and their least favourite things about Autumn were. Evie hates the cold and the dark, while Emma loves Halloween (who doesn't?! Free sweets and fancy dress!).

Personification is a writing technique which gives human characteristics to inanimate objects - so we did this to Autumn. The young writers explained what Autumn would look/sound/feel/move like as a human - some even drew out their character.

Autumn is a shaggy bearded man whose skin is cracked and creased. Time is no longer his friend. He is forced to walk the length of the city every day, he is exhausted. Dragging his boots as he walks. His eyes have sunken into his head. He has lost his purpose. He is nothing.

As a group, we then read Ted Hughs's There Came A Day as inspiration, and discussed how the poem explained the change in season. Then, on the flip side of the paper, the young writers wrote their own version, filling in the blanks.

Izzy wrote (how words in bold):

There came a day that stole the summer,

Took it for himself,

Now what shall we do with the trees?

The say said, the day said.

Take until there's nothing there.

And what shall we do with the sun?

Taunt it, tease it,

And what shall we do with the birds?

Chill them 'til they're weak,

they'll fly if they dare.

And what shall we do with the seed?

Force it beneath it's ancestors,

put it down to bed.

And what shall we do with the people?

Freeze them and stuff them,

make them love me until I cease to care.

Then came this day and he was Autumn.

His mouth was wicked,

After this, we looked at acrostic poetry, and each wrote one that spelt out 'AUTUMN'.

Uncles sit clueless, only in it for the food and beer.

Toddlers run around screaming and playing, making more noise than a canteen at lunch.

Uncivilised and snotty nosed siblings gorge themselves on sweets.

Nannas sit quietly, knitting gloves that have not prevention to the cold and wrapping presents that won't be opened for another four months, but as she says, "the early bird catches the worm". She has quite a lot of nerve for someone with only two teeth.

To finish off the session, we all stood up in a circle and told a story of a lion that got lost in the woods, one word at a time. Somewhere along the story, the lion meets a tiger, has a child with it, and then eats it. Not sure what happened there!!

Jumping straight into the Autumn themed poetry, the writers read through John Keats's ODE TO AUTUMN, and explored through conversation what the context of it meant. We discovered that it was almost like a love letter, or a tribute, to the season.

Similar to the younger group, the writers then personified Autumn, and created a character. Some writers formed humans, while others focussed on autumnal creatures and animals. From this, they were then asked to turn these characters into an 'ode' style poem.

Then, to switch it up slightly, we all wrote 'ode's' as a group, taking one line at a time, which curated some hilarious outcomes. However, a serious one which Hannah ended up with read:

The leaves fall to the ground,

Upon which my feet pound,

The hallows whispers around,

Leaves fall onto me, collecting in mounds,

The fruits of labour abound,

And evidence of summer can no longer be found,

As Autumn's kingdom is finally crowned.

Before finishing the session by sharing their poems, the young writers read Robert Frost's Nothing Gold Can Stay, and Emily Bronte's Fall, Leaves, Fall, for some last minute inspiration. 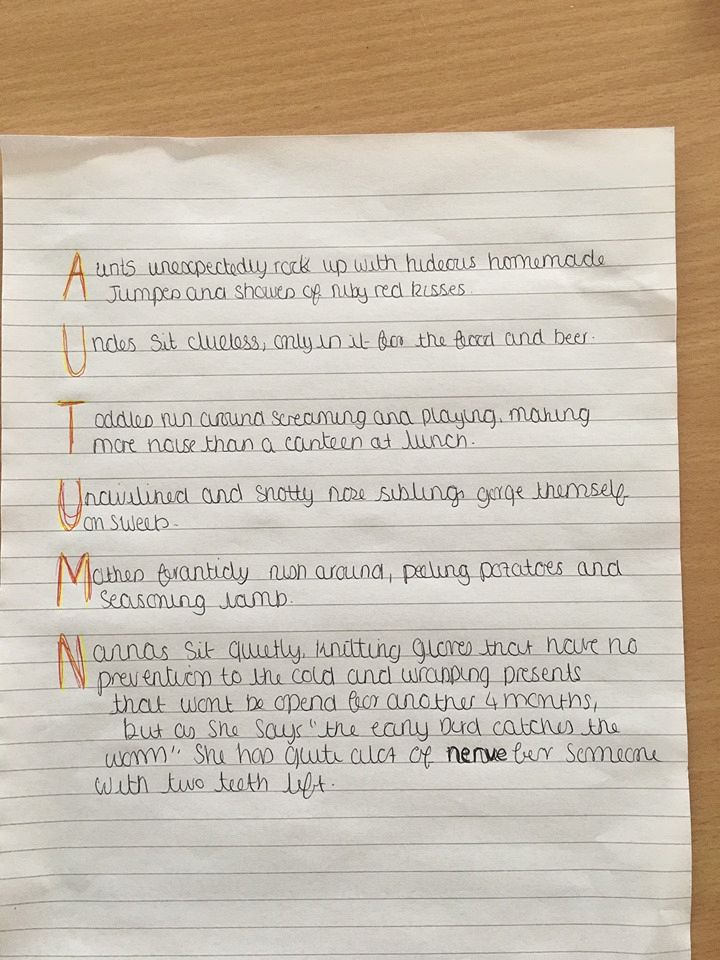 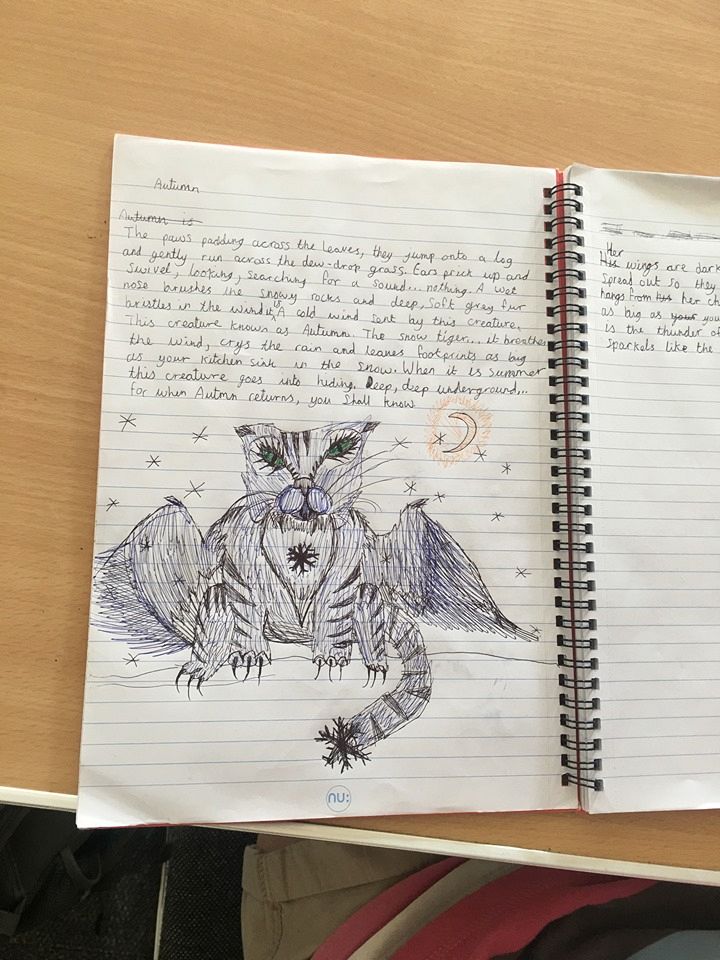 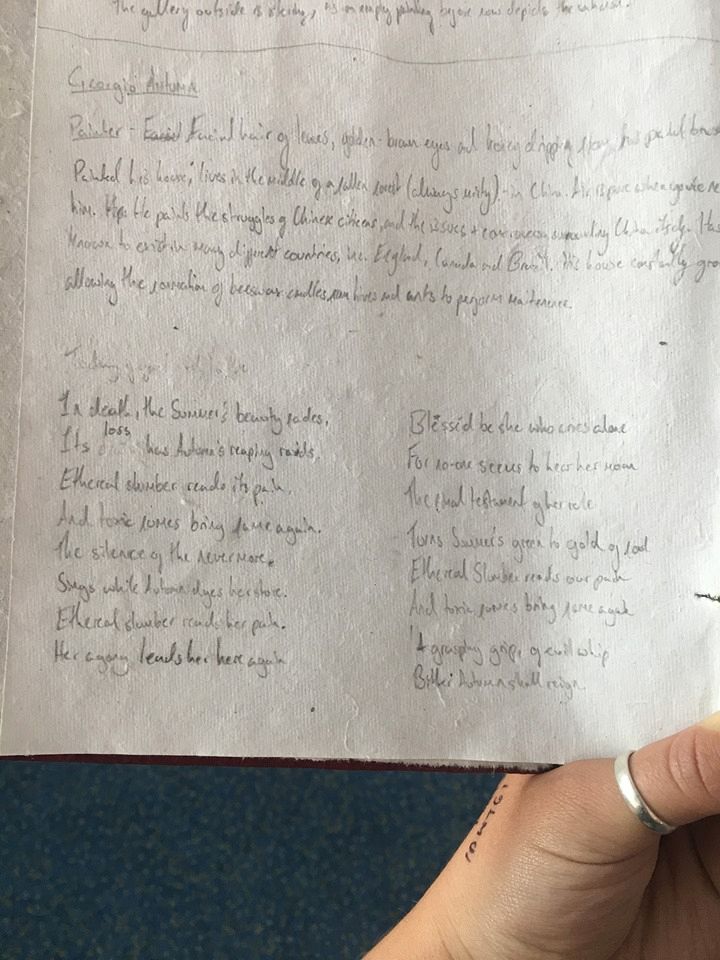