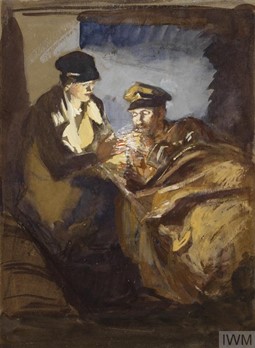 This week, we were looking at the 'Never Such Innocence'
competition, which accepts submissions of speeches, poems, songs and artwork on
the theme of 'The Unheard Voices of Conflict: Stories from Around the
World': https://www.neversuchinnocence.com/2020-21-competition

We started by looking at a series of pictures from the Imperial
War Museum as writing prompts, including In
an Ambulance: a VAD lighting a cigarette for a patient, by Olive
Mudie-Cooke and ‘Over the top’.
1st Artists’ Rifles at Marcoing, 30th Dec 1917, by John Nash.

Next, in celebration of International Women's Day, and to look
in more detail at the 'speech' category of the competition, we looked at Malala
Yousafzai's 2013 speech to the UN, on the importance of education for women and
girls, and for peace to allow this to be possible. Some people had
(shockingly!) never heard of Malala, while others were devoted fans and loved this
speech of hers in particular (Hiba!), so we discussed her inspiring story
together and the courage, extraordinary capacity for forgiveness, and powerful message
she conveys in her speech.

We also
looked at the poetry of Valzhyna Mort, a wonderful Belarusian poet, who writes
powerfully and movingly in both English and Belarusian about the legacy of war
and conflict for her country, and the importance of poetry to commemorate,
honour and remember the unnamed, the unknown, and the unheard.

Inspired
by these two incredible women, the young writers set to work, creating a series
of powerful and beautiful poems and speeches, on an impressive range of
conflicts, from Ancient Greece to homeless war veterans today. We wish everyone
the very best of luck with their submissions!