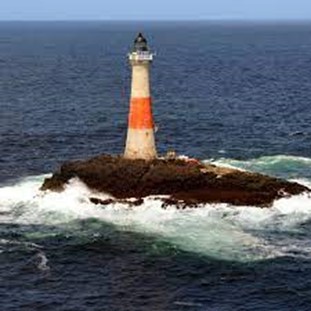 Welcome back to the summer term of Lighthouse Young Writers! For this term, we will be looking at a new theme...to try to guess the theme, in both groups we began by listening to a mysterious soundscape... As we listened, they were challenged to note down any ideas, words or images that came to mind, thinking about these questions...

There were many varied ideas about the scene which the soundscape conjured...from forests, to the jungle, waterfalls, a harbour, or a city late at night. But in the end it was revealed that the soundscape actually came from...a lighthouse!
Next we looked at a range of pictures of lighthouses, and the young writers each picked one. This Lighthouse could be in the past or the present – or in an imagined world! They then thought about the following questions...
Who lives here?
What’s their name?
How old are they?
What is their personality?
Why do they live here?
Do they work here?
Have they chosen to live here to be by the sea/alone/away from other people?
How do they feel living here?
Are they happy? Lonely? Anxious?
What is their daily routine?
What are some of the difficulties of living in a Lighthouse?
Next, we looked at short stories set in Lighthouses - the younger group looked at The Lighthouse Keeper's Lunch by Ronda and David Armitage, and the older group looked at the unfinished Edgar Allan Poe's short story, The Lighthouse. Using all this as inspiration, the young writers began a story about someone living or working in a Lighthouse....
Here is Charlotte's excellently suspenseful story:
Senior detective Archie Archer arrived at the crime scene. Normally from personal experience he wouldn’t approach a lighthouse but not wanting to show fear he approached first. To him lighthouses had always been creepy and now going there on his own, was never going to be a good thing!
He walked up to the big stone door. One of the only lighthouses left standing, Reachers point has been deserted for a hundred years. However, he had been called to investigate some strange going ons. He had explained to his head officer that detectives didn’t usually investigate strange noises but he had been made to.
The large stone door opened as soon as he touched it. That didn’t bode well! He took a deep breath in and entered. He had been warned that there was no light since it had been created in Victorian times. I mean who entered a place with no lights! Before he could turn back and rethink his decision, the door closed behind him with a large crash. He was trapped in a place where strange noises had been reported with no one else. He looked up the many stairs leading to the main part of the lighthouse. They were rickerty and falling apart. He took note that he wouldn’t want to run down them in a hurry. Hopefully, that wouldn’t happen but he took note anyway. Archie headed up the stairs keeping in mind that there wasn’t anything behind him. The stairs creaked everytime he took a step and he finally got up the stairs with shadows circling him.
And here is Aurora's mysterious and vivid piece:
The lighthouse had a particularly evil feel to it, that much was sure. It struck out of the Cornish headland like a false tooth, a pillar of whitewashed limestone about as tall as the church spire in the nearest town. At its top, a huge lamp was mounted in a rusted iron bracket, while the courtyard was littered with tarped boxes and the odd discarded trowel. It howled in the wind, holes in the brickwork feeding strong gusts through the tower like strings, and it never seemed to light up much even in the summer, when the sun’s rays lay upon it. The generator could be heard from yards away as it roared to keep the huge lantern shining and spinning, advising ships to keep well away, good advice indeed. The rocks just off the coast were infamously brutal, known for tearing into ships’ hulls like serrated knives through a simple fruit, so the lighthouse’s black presence was unfortunately warranted.
Doug Smith pulled on his thick jacket and red scarf, and donned his favourite blue-and-grey beanie. His old hand, gnarled like an oak’s ancient roots, firmly grasped the spiral bannister as he hobbled up to the light, a soft dishcloth in his other thick fingers as they swung rigidly by his aching side. After much time, Doug emerged at the top of the tower and faced the sea. Luckily for the old seaman, the years did not rob him of his sight as they did of his dexterity, so he could see the white froth breaking over the hidden rocks, the chastising gulls bobbing on the harsh water, and the distant shadows of huge cargo ships wandering the horizon. He smiled a sweet smile, the shrewd line short over his wizened lips, and slowly pulled out a spyglass which he raised shakily to his right eye. Closing his left, he peered through at the far-away carriers, reading the bold black letters emblazoned on their sides. Petra. Carmine. Two, that’s all today.
Turning around, Doug raised a wobbling hand to the glass of the lamp, and wiped away the dust that had accumulated there since last night. An inordinate amount of dust for just one night. Doug sighed and whistled as the wind screamed below him, picking up in the morning as usual. His ears pricked up, twitching. Something was different. The gusts seemed to be saying something, but that was ridiculous. Wind doesn’t say anything. Doug chuckled. “Say it agin, won’t ye?” he wheezed, laughing under his breath. “I’m a bit hard o’ hearing, ye see, my years announcing themselves cruelly, I suppose.” He kept wiping as he smiled.
“I said, you’re going to die soon.”
We can't wait to hear the next installments from these characters soon!
PreviousNext