This week we were confined to each other’s screens as we moved back to collaborative Zoom sessions for the first meeting after the half term break. We began with a special guest appearance from Susmita’s cat, an online meeting necessity!

In the build up to Christmas and pantomime season, we had a discussion led by myself about fairy tales and why we retell them so often. Fairy tales often speak to universal hopes or fears that can be translated across generations and cultures, in fact the same narratives often crop up in cultures across the world! We talked about our favourite retellings, such as the film Maleficent, and the book Step-sister by Jennifer Donnelly and discussed what was changed in these retellings to give a fresh perspective on a familiar story, after which I invited the group to rewrite their favourite fairy tale and change a single aspect of the story to see how that changed the narrative as a whole. When we shared our ideas afterwards, I was impressed with the variety and creativity expressed by the young writers. I especially enjoyed Katie’s retelling of Beauty and the Beast set in Waterstones!

We then moved on to working towards a group project of writing a pantomime, the perfect thing to keep our spirits up over this lockdown! Susmita shared the trailer for the Sleeping Beauty pantomime that we would be basing our creation on and we talked about the history of panto and the story of Sleeping Beauty itself. Viv gave us some interesting trivia about pantomime traditions, such as that good characters enter from stage right and evil characters enter from stage left, a tradition that harks back to medieval times!

After introducing us to the main characters, we split off into groups to work on developing them. My group had a lot of fun thinking about a Princess Rose that bucks stereotypes and a stuffy yet optimistic Fairy Lilac! Coming together to share our ideas, we found that the other group seemed to have had similar ideas for the prince and Fairy Lavender, which gave us some brilliant ideas for opening scenes! Together, we brainstormed several ways to open the show, each more over the top and hammy than the last.

I had a lot of fun as the guest in this session and was blown away by the creativity and passion of this group of young writers. I can’t wait to see the finished pantomime when it’s written! 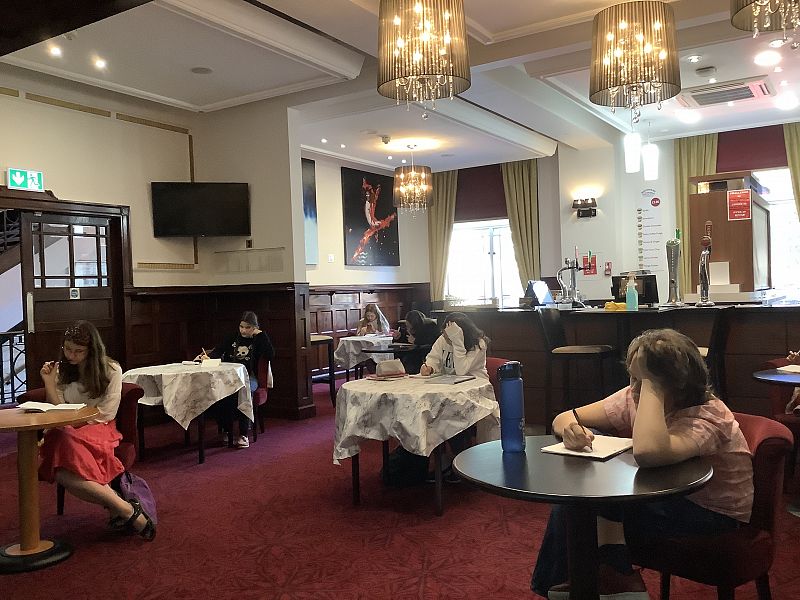