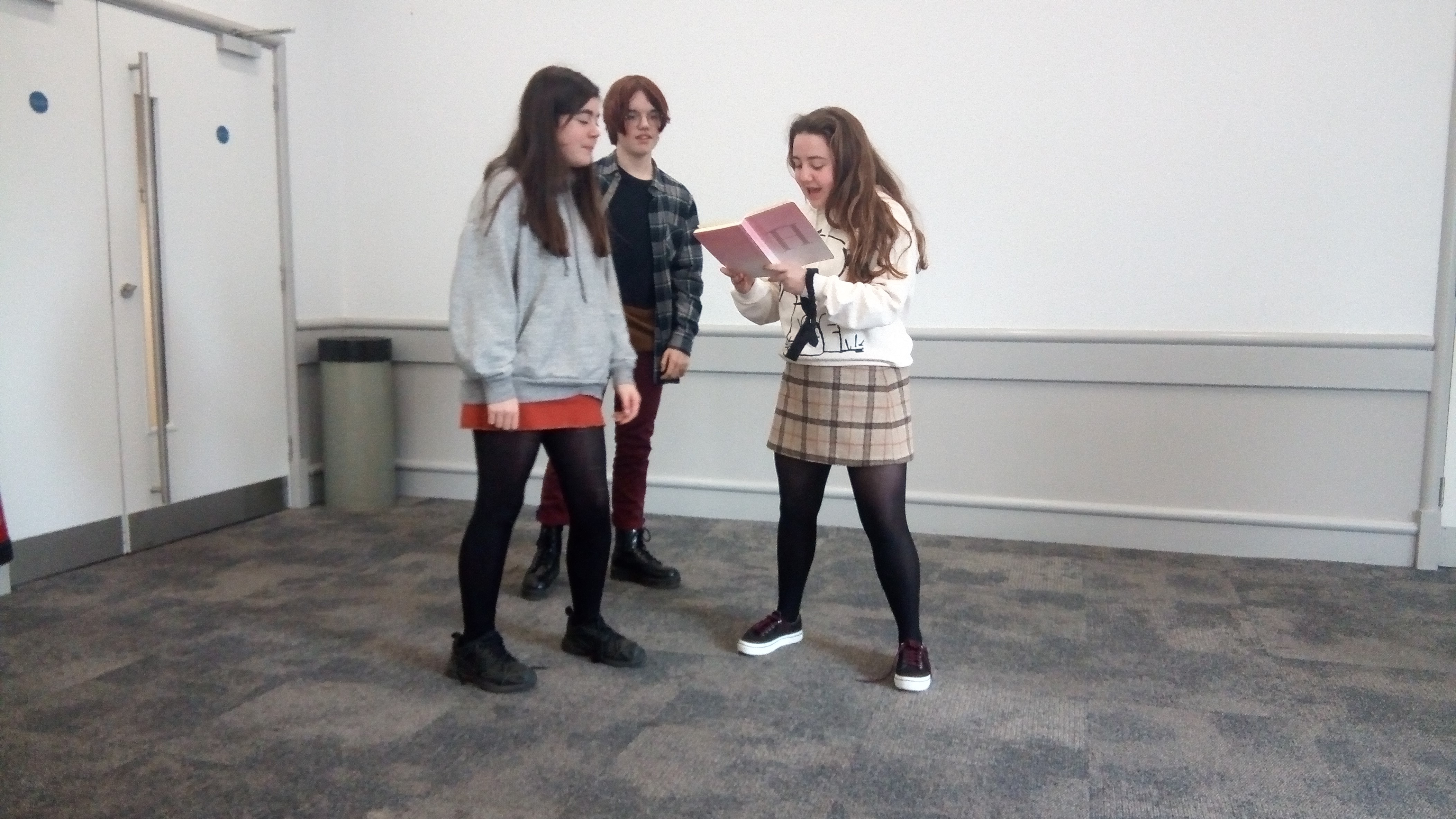 In
this week's workshop we were creating scripts based around two characters who
are enemies! We began by thinking of as many famous pairs of enemies as we
could (e.g. Sherlock and Moriarty, Harry Potter and Voldemort, The Avengers and
Thanos, Tom and Jerry, Doctor Who and the Cybermen,, Shrek and Lord Farquad,
etc!) We thought about why these characters were enemies - was it because they
were opposites and wanted opposing things (e.g war and peace, good and evil,
freedom or world domination, etc) or was it because they both wanted the same
thing (e.g. a job, a love interest, hidden treasures, etc) and only one could
get it? The young writers then used these ideas to create two characters of
their own who were enemies, thinking about both what these characters are like
individually and why they don't get on!

Next, they each picked a setting from
the Golden Box Of Mystery Settings - this was a place their two enemies would
be trapped together and forced into having a dialogue which would form the
basis for their script. Examples included a broken lift, a spaceship and a
prison cell!

While
writing these dialogues, there were additional challenges of things to include
- one character needed to have an annoying tic, for instance tapping their
feet/pacing up and down/an annoying laugh, which would irritate their enemy
even more! Then all the young writers picked a Mysterious Object from the Mystery Box of Mysterious Objects, to use as a prop for their scene! They had to
decide on the significance of this object (was this something the characters
were fighting over? Or did one of them have it and the other not know about it? etc) and how to work it into their scene.

This
week as Lucy was away (we missed you, Lucy!) we were lucky enough to have
Amirah, a young writer from the 15-18 group, helping out with the 11-14 group -
she did a brilliant job helping everyone with their ideas, being master of the
Mystery Boxes and helping people choose their props, and suggesting new
directions the pieces could take!

There were some brilliant pieces, including Eleanor's story of 2
friends who have fallen out over a love triangle, and who are now trapped in a car
together driving through the desert - a beautiful dragonfly (from the Box of Mystery Objects!) flies in through the
car window and distracts them from their fight, leading to them making friends
again! Megan was off to a great start with her set-up of herself and her dad
trapped on a desert island, fighting over 4G (with a great twist!), Jake had a
very original set up of Lord Asriel (from His Dark Materials) fighting with a
gym teacher in a cupboard, and  Lilly had an inspired idea with her two
enemies being the seasons Spring and Winter stuck on an island together. We
heard some of the pieces performed very enthusiastically at the end of the
session!

In
the older group we were also scriptwriting. We looked at the opening scene of
Orphans by Dennis Kelly, to start us off, with some great reading from Lily,
Rosie and Hannah. It's an immediately intriguing set up for the start of a
play, with two characters having a candlelit dinner when they are interrupted
by another character who has blood all down his front! We talked about what
made it exciting and what questions it left us with and then the young writers
set to work creating their own scenes where two characters are doing something
seemingly ordinary/mundane and the entrance of a third character changes
everything. Amirah had a very interesting and intense set-up of two characters in a relationship making a bed together, and the fact that the woman is coercively controlling her boyfriend is gradually revealed, when a friend
turns up at the door - we were left on a great cliffhanger. George on the other hand wrote a piece
with a very different tone, which made us all laugh out loud - Lily is taking
out 'the rubbish' but John notices that the binbag is moving - their friend Paul is in the
binbag! George wrote the end of the scene when we all begged to know more about
why Paul was in the bag and it turned out he had stolen Lily's smoothie (an
unforgivable offence, of course!) The comic timing was excellent!

We
then read another opening scene from a different play as a group - Blindsided,
by Simon Stephens - which was excellently performed by Evie and Esther. Again,
we thought about why it worked so well and what questions we had. We all agreed
the character of Cathy seemed to be the one in control in the scene (until
right at the end) and we talked about the tactics she was using through her
speech to get what she wanted from the other character, John (interrogating, insulting, provoking, winding up,
accusing, etc) and how she changed her tactics throughout. The young writers then either finished the opening scene they
had begun earlier or started a new scene, inspired by Blindsided, where one character seemed to be in
control of the dialogue - but then there was a twist and a shift in the power
dynamic. Again, there were some brilliant responses and we look forward to
returning to some scriptwriting soon - who knows how these opening scenes might
develop, there's certainly the start of some very intriguing (and varied!) dramas
emerging in both groups! 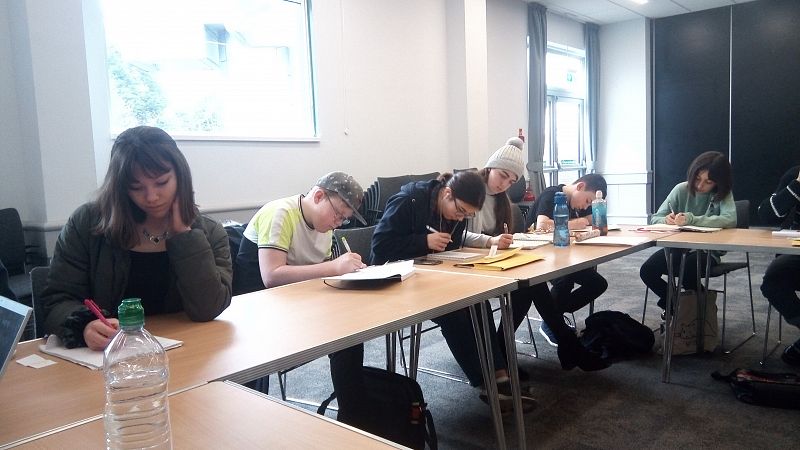 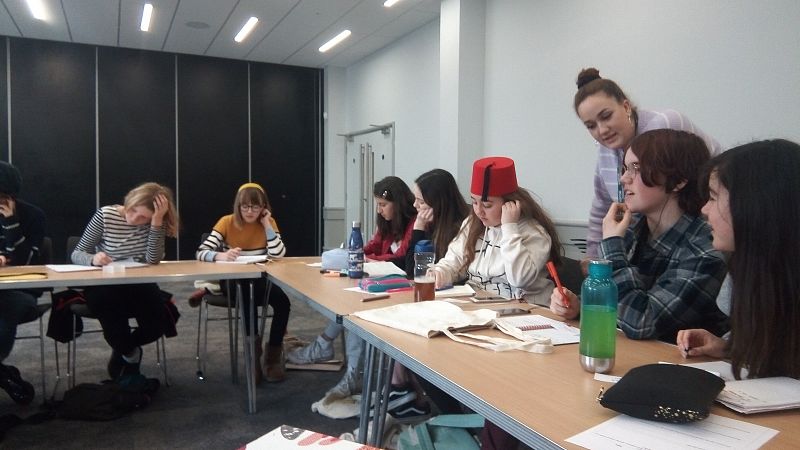