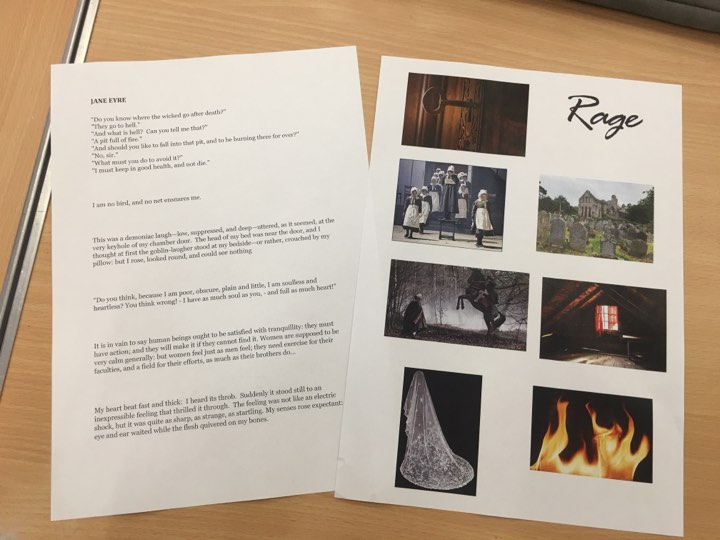 In preparation for our upcoming Jane Eyre theatre trip, this week we explored gothic themes and the story of Jane Eyre itself.

As a warm up exercise, the Young Writers listened to creepy sound effects (door knocks, creek door, footsteps), and wrote for five minutes while they played, using the noises as inspiration.

The writers shared what they created - Sam wrote a chilling piece of a slender figure appearing from his cupboard, while Izzy wrote a beautifully poetic piece which explains the sounds holding colours in the darkness.

Next, the writers were given images which explain the plot of Jane Eyre, and discuss in pairs what they think the story might be about. Their ideas range from a crazy wife locked in an attic, to a horror about a house fire. From these images, the Young Writers then write their own stories.

Why did I lie? Why? I ran away to meet the man I loved. Tomorrow we plan to run away together. I have lived in these servants' quarters for 10 years. I'm 18 and that is normal to be in love. Now I'm locked up in the attic trying to find a way to escape this hell hole. In the horizon I see a man on a black horse. "Derek!" I scream as loud as I can. Then suddenly he screeched to a halt.

"Ebony my love, I cant seem to find you. Your angel like voice is playing in my head but I can't see you" he preached.

I need to escape. So I punch the window. The shards of glass shatter across the grass and I notice the blood dripping from my hand.

At the end of the session, we had some brilliant news from Dean, who has won the 'Let It Snow' competition for his winter poem, which he began in our winter poetry/kennings workshop last term. Massive congratulations to Dean on his achievement, it's a fantastic poem!

Congratulations were in order this week, as Rosie, Helen, Evie, Hannah, and Esme all had their submitted audio pieces selected for the shortlist of the BBC Calling The Shots. So congratulations guys! Thats fantastic!

With the eery noises playing, the Young Writers kicked off this session with five minutes of gothic writing.

Thomas write a fantastic dark piece focussed on the 'incessant knocking', while Esther contrasted this with a humerous 1st person POV of a teenager discussing a pile of dirty clothes.

To introduce Jane Eyre, Tabby handed out a list of quotes from the book, and asked the Young Writers to discuss what these quotes revealed of the story. Quotes included 'I am no bird, and no net ensnares me', and '"Do you think, because I am poor, obscure, plain and little, I am soulless and heartless? You think wrong! - I have as much soul as you, - and full as much heart."'

We discussed the whit and strength within the quotes, and question whether Jane Eyre herself was the speaker of them. The references to freedom through the image of a bird were picked apart and analysed, then compared to Jane's unfazed demeanour. Women's power, wealth, and social classes also came into conversation, the Young Writing sharing their opinions on the use of discrimination in past/time of the book.

After this, the Young Writers picked one of the quotes to use as a starting point for their own story. They could select only a few words from the quote, or the whole quote itself, or just take inspiration from the meaning.

My heart beat fast and thick: I heard it throb. Suddenly, it stood still to an inexpressible feeling that thrilled it through. The feeling was not an electric shock, but it was quite as sharp, as strange, as startling. My senses rose, expectant: eye and ear waited while the flesh quivered on my bones. The air fizzled like sand in a timer, hissing through the pore between heaven and hell, counting. Ever counting. Perhaps a clock ticked, chimed, sang some slow melodic song in a somber minor key. Or perhaps it didn't, perhaps time stood reluctantly still, trapped on the brink of extinguishment, balancing on a silvery thread of hope.

Quaking, I dropped to my knees. The cool tough of the stone floor, muffled by the tough weave of my rumpled skirt, against my legs should have brought me to myself. But it didn't. My fingers scrabbled for purchase on it's rough surface; I propped my palm against it and played my fingers wide as to grope as much of my foundation as possible. It was there, built up beneath my tangible hand as water builds up behind a dam - the floor. Maybe my legs were numb, to detached from my body, because what they were folded on top of was as good as dissolved within the folds of fabric collected around them. Collected like dust on an ancient article of history. I couldn't feel the ground. Perhaps I was flying.

Not as an angel flies: her halo spread around her like sugar on an apple strudel, her wings weightless as a paperweight which holds the layers of her dress in perfect tucks and pleats about her figure, her legs unwound within her skirt like a gazelle stretching out in mid-leap. I dolt more like a ghost, a ghoul which flies for lack of other activity, lack of other option. I was hanging in the air. Hanged. A ghoul, a ghost, afraid of only the beat of my non-existent heart. 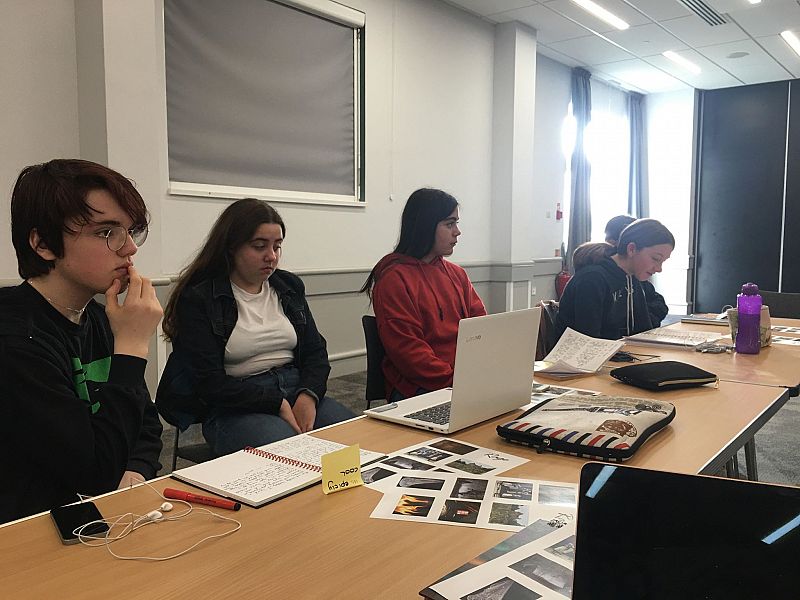 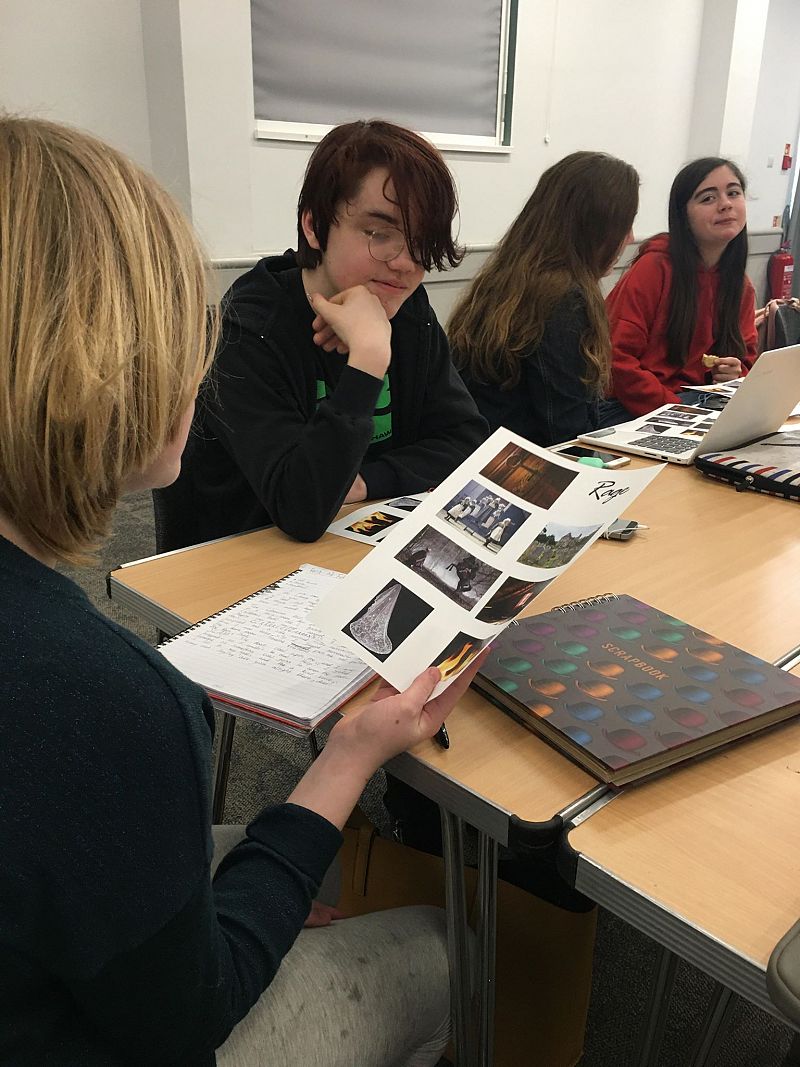 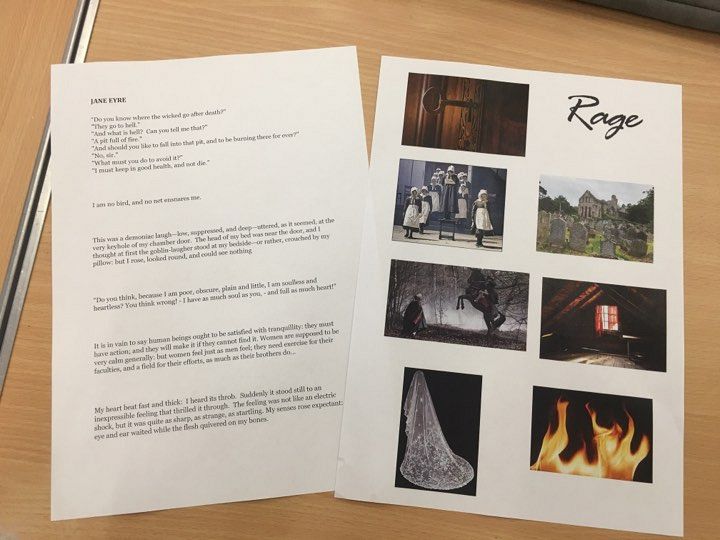