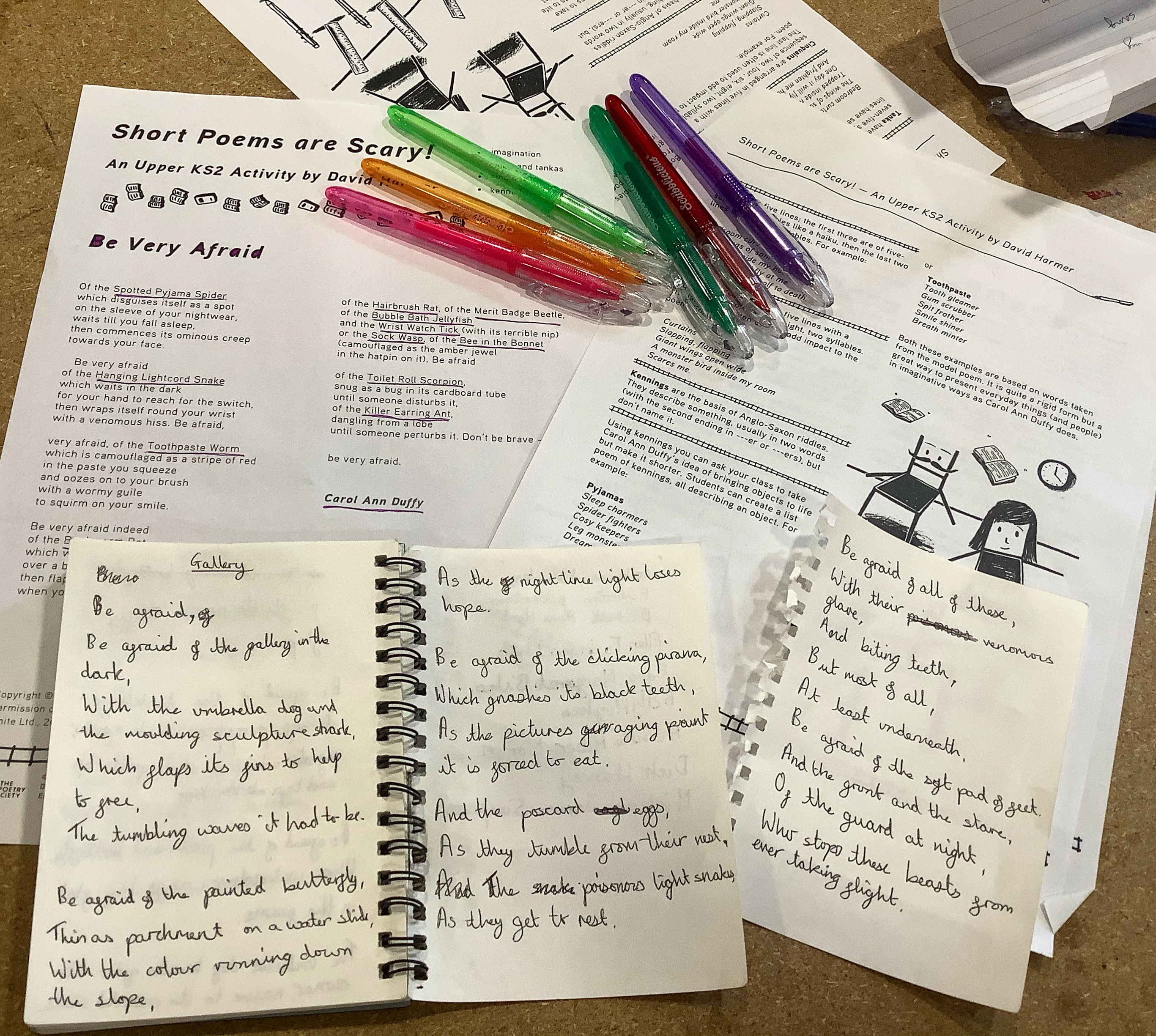 Could you think of thirteen ways to eat a chocolate bar, or maybe twenty ways to look at a history test? This week the Young Writers focused on poetry, creating some original pieces for our anthology that will be published later this year. Inspired by Wallace Stevens’ ‘Thirteen Ways of Looking at a Blackbird’, the group wrote their own poems with a personal twist, following the same structure but with varying themes. For example we discussed thirteen ways to look at a fortune cookie, or thirteen ways to look at a loved one. Not only did this prompt allow us to experiment with a new poetic form, but also showed the often overlooked importance of a title and its ability to predict and revel the poem’s intention.

The first group also began exploring poetic form, taking inspiration from Carol Ann Duffy’s ‘Be Very Afraid’. The Young Writers began by envisaging a space or a room and its respective contents, for example a cinema or a swimming pool. We then considered what would happen when everyone left the space at night, discussing whether the objects as visual elements would perhaps transform. This gave inspiration to personify and imaginatively describe the rooms contents, creating a metaphorical and playful poem. We had a walking table that was described as a wooden caterpillar for example, and Katie (12) beautifully depicted a gallery’s contents coming to life after opening hours.

Cassie, Batool, Sam, Isobel and Lucy also have some very exciting news that we can now share! The Young Writers were successful in the second stage of the New Creatives project and were therefore invited to Bristol on Thursday and Friday of last week to meet with ‘Calling the Shots‘ mentors. The group have kindly written a small piece regarding their experiences.

“We met at the train station and nervously looked at the train times. We got on the train, took about a million selfies, attempted to sleep (which did not work) and got off at Bristol Temple Meads.

From there we rushed over to the modern arts contemporary house, Arnolfini arriving several minutes late where we were greeted at an auditorium (despite entering through the wrong door).

The information was useful but, more importantly, we had a DELICIOUS brownie (10/10 for catering) and then when the session ended early had a chance to look around the beautiful city of Bristol, where we took the ‘scenic route’ to the station (aka we got lost). We enjoyed the English sunshine which is very rare down in Southampton and admired the old gothic architecture of the city. (And took so, so many photos).

On the second day we went to get the half past six train and it took about two hours to get there. Alix the project manager gave us the task to create an audio piece that included at least one voice, sound effect and atmospheric sound. We the all worked together and created a master piece from the prompt ‘someone gets arrested’. We named the piece “Gosh Darn It!” after an amusing improvised line from Sam.”

From the guidance the Young Writers received, they can now adapt and develop their original pitches ready for resubmission and the next stage! The blog will of course be updated with any news and we wish them all the luck in this exciting opportunity.