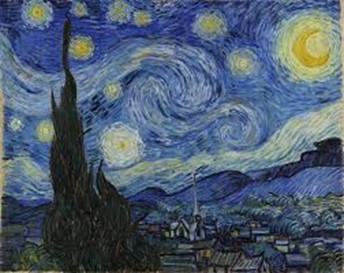 This week, we were using artwork as prompts for our writing. We
began with a warm-up exercise, to choose a person from one of the paintings on
the screen (including Picasso's 'Girl With Dove', Grant Wood's 'American
Gothic' and Edward Munch's 'The Scream') and write a short description of their
character, either describing them from the outside, or from their own point of
view. Interestingly, ‘American Gothic’ proved most popular, but there were very
varied responses to it, particularly focusing on what the man with the pitch
fork might be up to!

Next, we
all imagined ourselves in a gallery – this could be a gallery we had been to
before (in a pre-Lockdown world!) or an imagined gallery – I shared a picture
of the National Gallery in London to help out. Using all of the senses, we
thought about what we (or our character in the gallery) could see, what they
could hear, smell, touch and even (if it fitted the story!) what they could
taste! We thought about why the character was in the gallery, if they were there
by choice, if they were interested in art, if they’d wandered in by chance or
were there to see a particular artwork.

Next, our
character was going to fall into one of the paintings!

I shared a series of famous paintings, in
very different styles, from Van Gogh’s ‘Starry Night’ to Edward Hopper’s ‘Nighthawks’,
Georges Seurat’s ‘A Sunday Afternoon on the Island of
La Grande Jatte’ and Marc Chagall’s ‘Circus Horse’. The young writers each
chose one painting and started making notes about the colours, shapes, textures
and images they could see, aiming to be as precise as possible. Then, they had to
start using their imaginations – would you be cold or warm in the picture? What
sounds could you hear? What could you smell? What could you touch? How would
you feel in the picture? Who might you meet? How would you fit in?

After thinking about all these questions, the young
writers then had to decide how their character would fall into the painting,
and what that sensation might be like – would it be a quick zap and sudden
arrival into the picture, or a slow, dizzy falling into a wormhole, would it
happen by accident, what would the build up be?

Once we had decided some of these things, the young
writers then had to join it all together and begin a short story where a character
in a gallery falls into one of the paintings!

The results were truly exciting and imaginative,
and we hope to hear more of them next time, as many young writers had more to
write as their stories were just starting to develop.

For now, I’ll leave you with Eve’s poetic, dizzying
and enthralling piece, inspired by the ‘Birth of Venus’ by Botticelli and
Stendhal or Florence syndrome (a condition where people suffer rapid heartbeat,
confusion and even hallucinations, when exposed to works of great beauty – I’d
never heard of it before, but it was a brilliant idea to work into this
prompt!)

and just like the birth of venus, i emerge, stabbed by shells and soaking wet. i'm pulling at my mouth, crazed, trying to pull out seaweed like a magic scarf from my throat. to everyone else, i'm just staggering around the gallery corridor, coughing. everyone’s faces are like smudged paint, which isn’t a perception out of the ordinary for someone faceblind. faces are a memory i can’t quite recall, and i gave up recalling them a long while ago. I just drag their voices like nails on a chalkboard instead. Blundering like a fish out of water is now terrifyingly ironic. if i didn’t look like a foreigner before, i now look like a murderer, scratching at my neck, lunging at people i’m convinced exist. like people have been anything more than a white flag, waving in the storm; a long lost sign to give up. i feel like a God where they gave me the mind but not the body to hold it all, so my bones are clattering like pearls hitting the floor, heart throbbing, not quite born from my chest, yet.

and all of a sudden i’m looking someone square in the eye. i can’t be sure anything exists as i see it anymore. but this man is looking at me and my breath pulls up from my chest like a tidal wave. it’s the first time i have ever recognised a look of anguished scrutiny and i never want to see it again. everything else is dipped in watercolour. he is dissolving; i can never be sure if i’m being watched but i’m certain this time that i am. his eyes are trickling down his face but i know he’s watching me. i trip over the sight of him and run through a blur; the air conditioning whipping at the water dripping from my skin. sharks are lashing at my ankles and i think i’m screaming because i can feel the seaweed chafe on my teeth. the corridors are underwater chasms and i’m being swallowed as i run. he’s also shouting but i can’t hear him. i don’t want to hear him.

and suddenly i’m gasping for air again, reborn, but outside in thickets of seagrass and coral. a sea wind is hitting my cheeks. i’m shivering but can’t stop to tell. he’s licking at my heels like saltwater. everyone else is coming up out of the ground, just as drenched as me, but somehow calm. i want to ask them why, when i’m drowning, but no noise is coming out of my mouth, i’m just choking on a riptide. i turn around and he’s perfectly dry and coming towards me, still. i see a glimpse of a stop sign etched in his hands but i don’t look long enough to heed it. i just need to find a way to stop suffocating. but they’re beckoning me, now, hands grabbing the air and clutching at my jumper sleeve. i don’t know what’s so special about me but i’m surrounded by desperate, crying hands.

and when i try to resist their pull, i collide with a shimmering pool of marble. the hands are gone as quick as they’ve come, gone as quick as a gasp. and i can see his face. clear as the sky streaming down white light. is this dying? perhaps he is coming to save me.