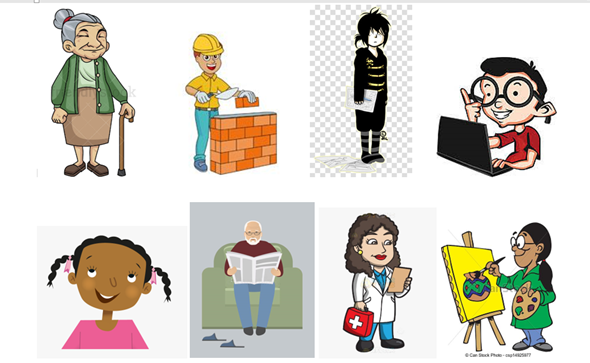 This week, we were writing scripts.

To begin, the young writers had to choose two of the characters from the image above and write a short dialogue between them, aiming to show who the characters were through how they spoke to each other - and we had to guess who they were!

Next, either developing further with these original two characters, or with two new characters, the young writers wrote a scene where one character had a secret and the other character was determined to get them to reveal this secret. We thought about the techniques the second character might use to try to get the first character to reveal the secret, and how they might change their tactics as the scene went on. Techniques included:

being really sweet/nice
threatening/bribing
trying to make them laugh to put them at ease
distracting them
talking about other things and hoping they'll let it slip
double-bluffing (pretending they don’t care!)

Cat: What do you mean?

Dog: Come off it Cat. You’ve been acting weird all day. And all of yesterday.

Cat: So what? What are you suggesting?

Dog: You’ve got a secret.

Dog: You do and you’re just denying it.

Dog: We’re best friends. I wouldn’t keep a secret from you.

Cat: I don’t have a secret.

Dog: You do but you won’t admit it. Or tell me.

Cat: So ... what are you doing tomorrow?

Dog: Nothing much ... I see what you’re doing. Changing the subject so that you don’t have to tell me.

Dog: Yeah right. You go walking round with your guilty conscience, hoping no-one would notice but I did. I noticed.

(Dog starts to walk away)

Cat: Where are you going?

Dog: To get some fresh air. (Pause) I’ll be back soon. Hopefully, by then, you’ll talk to me and share your secret.

(Dog gets to the door and walks out.)

Cat: How can I tell Dog? I’ve got plans that he can’t know about. I’ve been planning this for weeks.

(Dog is secretly listening in on Cat and has heard every word.)

Dog (quietly): She wouldn’t tell me face-to-face so I’ll listen in instead.

Dog: Your secret. The secret that you’ve been planning for weeks and I can’t know about.

Cat: You’ve been listening in. How could you? I thought we were friends.

Dog: So did I. Friends don’t keep secrets from each other.

Cat: Friends don’t spy on each other. You are unbelievable.

WARNING    These
people talk weird because they are elves

Nafindel: How do you fair on this fine day?
Alancer: Most mightily, not least that this will be a day of
pleasures for me.
Nafindel (intrigued) Oh, is that so?
Alancer: Indeed it is.
Nafindel: (curious) And why, pray tell, is that? For what reasons
are your spirits cast so high? Is it the glorious light this notable day brings
upon us? Or the clear waters of the sacred Lake Mirosa?
Alancer: (smugly) Neither, for the arts I study are beyond
all else.
Nafindel: (more intrigued) The arts?
Alancer: (irritated) Yes, the arts if you must.

David waking up to a bright lights pointed to his face.

David: WOT HAS HAPPENED DAN. TELL ME THE TRUTH.

Dan waking from his chair

then mumbled and fell back asleep

David: why did our vision go out and why am I in hospital?

Dan waking up with one eye closed

Dan: we got attacked by crocodiles and we got bit after I
angered one by slapping it in the face.

David: WHY ON EARTH HAVE YOU BEEN SLAPPING CROCODILES. YOU
NEARLY KILLED US.

Dan: we got chased by a T-Rex and we jumped into the water
forgetting there’s biting ocean animals.?

David: ooooh yeeeaa. Sorry I did not understand. Tell me
that again.

Dan calls in a doctor from outside the room the doctor
rushed in and made David lie down again and took the breathing mask of him
.

Dan: remember that old boomer who had that boomer mobility
scooter?

David: why are you here. why do you keep following us I just
want to make sure you pass away the most painful way possible.

David jumped up with his fish flip-flop.

David OOOOOOH THAT OLD MAN. HE HAUNTS ME IN MY DREAMS. NOW I
REMEMBER EVERYTHING. BADABOOSH.

Doctor: sir you have a full recovery.

And they leave the hospital

BY JAIMES AND SAFIR