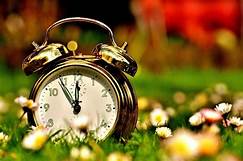 This week, we took our inspiration from the clocks moving forwards one hour - one of the many joys of Spring!

The young writers were challenged to write a short story based around a character being late/disorientated by the clock change! Here are some examples:

The weather is wrong.

I checked it just now, it looked fine.

No, it’s wrong. It should be 7 degrees and it shouldn’t be raining.

It was forecasted to rain.

I know you’re upset but—

It. should. not. be raining.

I checked. And you’re not a meteorologist.

And last time I checked, you weren’t God.

No, because that doesn’t exist.

In my world, it’s absolute.

Right, okay, fine, but it’s raining, I don’t know what to tell you, I’m sorry, it happens.

Did you change the time?

Ellen, no, the clocks, did you change your watch.

Yes, they really did.

You dog ear your books, I don’t trust you.

What does that have to do with anything?

It should be raining.

I’ll google it for you then. Yep, see, told you. You’ve got the time mixed up.

“You dog ear your books, I don’t trust you” Well I buy you your weekly quavers allowance

I’d change your watch before you forget.

You’re usually on top of your google calendar—

Are you going to stop buying quavers now?

Of course not. As long as I stop getting dog ear book slander.

No, because you should use bookmarks instead.

It's dumpster diver dan. He is going to school. You can
see the wind brushing his hair and he carried his teared bag and walked along.
wait, why is no one hear? he could still hear the chatter of the other
students. He jumped on a bench to look in a window and he felt a pain like a
bullet through his heart, the time had gone forward an hour.


Dan had been late several times before, making this one
become a detention.

"Dan, this letter is for your parents."

Dan just opened it and drew on it, made it into an airplane
and walked home. He told his parents he had been in tennis club.

Actually, a less than fine morning before which Eddy had had
barely enough sleep to get him through a boring bingo game with his late aunt.
But today, Eddy had something else, not a bingo game, in fact, it was something
much greater than a bingo game.

Today was the performance of Tchaikovsky’s Violin Concerto
in D. He was the soloist (basically the big cheese of a concerto performance as
they are accompanied by the orchestra - that's how Eddy liked to think of it).

Though he did not know it yet, the time, had, rather
inconveniently, changed. An hour earlier to be exact.

Normally this would not be too much of an issue for most people,
as the wide majority of us have our alarms on our phones, which automatically
adjust to the change in time. Not Eddy, neither he nor his old analogue alarm
had adjusted to the time change, let alone knew about it.

He was about to snooze off for a quick 5 minute nap, which would probably end
up the same as this does, but he preferred not to think about it that way.

There was a text from the director at the concert hall where
he was meant to be performing, it said: “As you have not yet shown up for the concert,
we have replaced you in the role of soloist by another member of the orchestra,
WHO ACTUALLY HAD SHOWN UP.”

Not only was it exhausting to realise that she was an hour
out of sync, and as such her entire schedule thrown off balance, but it was
also a very nice day to then have to spend an extra hour indoors. The clocks
springing forward was not an experience that Sammy was excited for at the best
of times, and March of 2021 was certainly not the best of times. While she
wasn’t a particularly social person, that was usually at her own discretion:
being told that she wasn’t allowed to go outside and see the only two friends
who kept her sane enough for a stable conversation by some Donald Trump rip-off
from Eton seemed oppressive, even if she wasn’t going to go outside anyway.


Sunlight streamed through the regrettably open blinds of her
flat, the sounds of gladly unquarantined birds chirruping away from the yew
trees in the garden a few doors down. As much as she wanted to close the window
to keep the annoyingly cheerful sounds out, it was a warm day (unheard of in
British March, especially in the last few years that truly made it feel like an
extension of Winter) and she was too tired to be bothered to lift an arm and
shut it at the handle that was a mere few inches from her head. She was too
tired for most things, actually: the breakdown of her whole schedule had put
her brain on eternal standby mode whilst it rebooted. This manifested in Sammy
laying underneath the covers at 10 in the morning, internally moaning at
herself for being lazy whilst her body attempted to stay at a perfect 22
degrees Celsius in bed. She internally cursed her body, which responded by
kicking her feet out from the bottom of her covers. Her body could be so sassy
sometimes.


the clocks are going forward, an hour goes away,

This day I am quite busy additionally it is mothers day.

My mum stormed into my room, where’s my flowers, she said,

I was still half asleep so I stayed an extra hour in bed.

We all came downstairs tired, my mum’s attention she was without,

We all had breakfast brushed our teeth and then rushed out of the house.

My brother played football, a theatre rehearsal was what we had,

Our family was rush rush, on mothers day with a mother quite sad.

We write the card got the flowers and chocolate to last a while,

We all gave her this and she gave me that loving smile 🙂.

Next, the young writers were challenged to write about an animal waking up from hibernation:

The bat colony of all pregnant bats woke up. OH MY GOD!
LINDA IS STILL ASLEEP! screamed everyone as all of them except linda woke up.
SHE IS STILL LOOKING DOWN! The doctor bat came into the cave. "don't touch
her, she will soon have a baby!"

That night in the cave little Jim Bat was born.

"Oh yea guys! Forgot to ask, how was hibernation?"

I saw a human today. That's not to say they’re rare or
anything, I was just particularly frightened as that was the first human I had
seen since I awoke from my hibernation. To be perfectly honest, I had been so
frightened that I scurried away into a nearby bush at the speed of ‘There are
two humans nearby, PANIC’, or 3 mph. It wasn’t too bad, I don’t think they saw
too much of me so they probably won’t be able to hunt me back home.

And here are some very important hedgehog facts from Zoe:


The History and facts on Hedgehogs
By Zoe

1)They weren’t always called hedgehogs
Hedgehogs were not always called a hedgehog,
originally, they are called Urchins. This led to the naming of the sea urchin.

2)They have good self-protection
Most people think they roll up in a ball to
scare of predators, but they don’t it is because they have sensitive and
vulnerable stomachs.