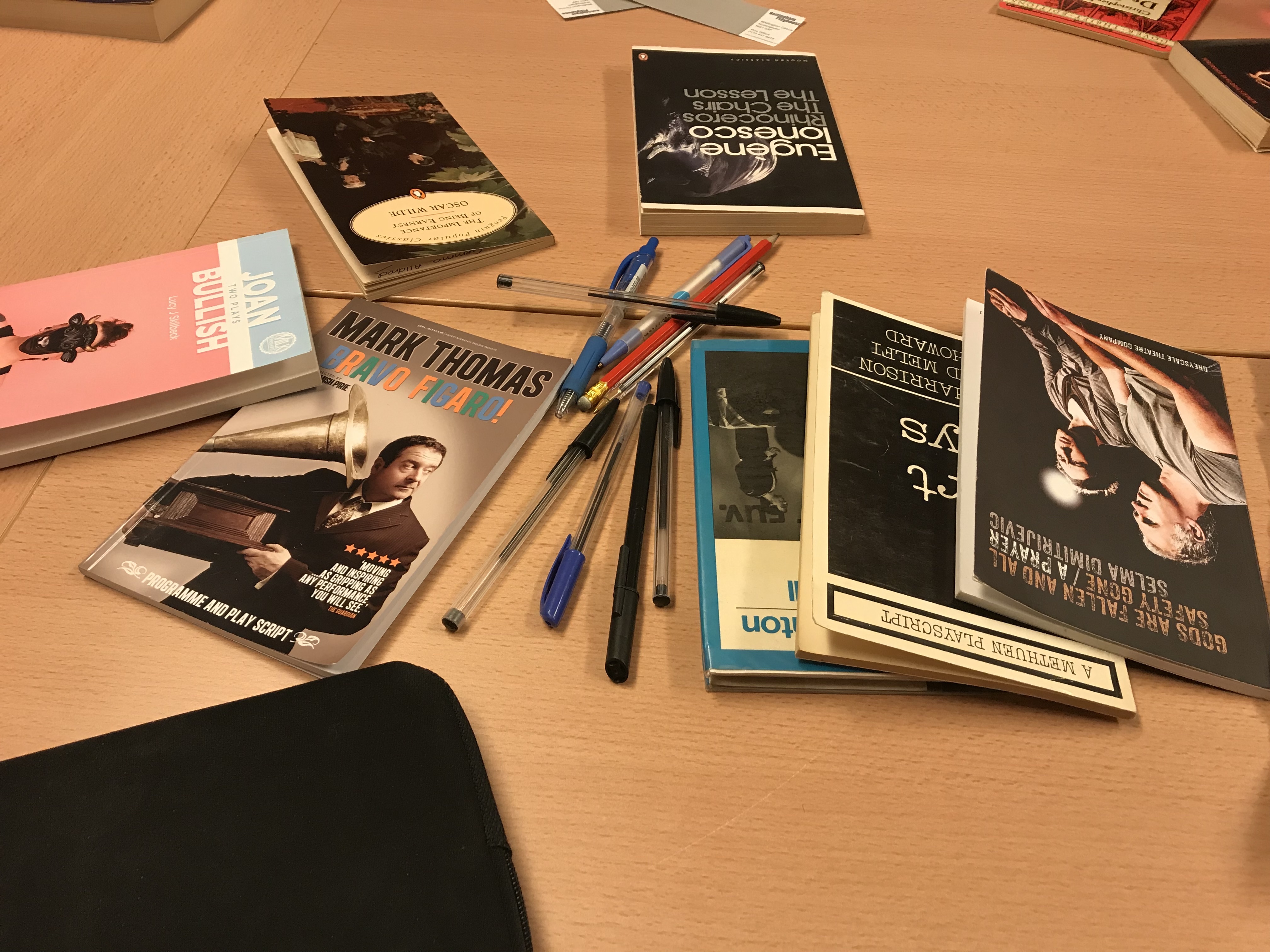 Writing for performance, my favourite type of writing!

This week we looked at plays, as we should have had a theatre trip yesterday, but unfortunately the show was cancelled (double theatre trips next term!).

We started by looking through lots of different texts and discussing the differences and similarities.... how the length of the lines can alter the delivery of the text, how Marlowe’s Faustus, and Sophocles make use of Chorus’ and what function they might serve which led on to Jenny telling us about a recent immersive play she’d been part of which was set up like a party and you could choose how to follow the action.

We then looked at two plays from the ‘million tiny plays’ series (which continually brings me great pleasure) our task was to read it through and then think about how you might direct it as a play. As we worked through the task we started to understand how plays as a particular form are only completed when they’re performed and how the audience, actors and director add the sort of details we’d find in prose eg how things are said, or what actions are taken.

After the break the job was to write our own pieces, we decided on two characters and a context with everyone responding differently to the task;

The scene takes place in an inner city GP Surgery. It is busy and everyone is having to wait.

GP Surgery, busy waiting room with most of the seats taken. Martin (59, Scottish accent, slightly unkempt and balding) is sitting hunched over, head in hands, when George Carter (81, well spoken, smartly dressed and cane in hand) walks over to the empty seat next to Martin.

GEORGE:          Wrong? Where would you put those people over there, see – those three, waiting at the desk? And that ladies pregnant.  She can’t stand around waiting. What’s “wrong” with a few more chairs…?

MARTIN:          They’re going to chop my balls off! What goddam difference is right or left?

GEORGE:          Not to worry. Still stands to attention. No need for those little blue pills – nothing against them, of course. (Chuckle) All in working order. You ask my wife!

Groans as he stands

GEORGE:          If only getting upright from this damn seat were as easy.

GEORGE:          Of course you are. It takes courage to face your greatest fears. Vanity kills! No point being a dead vain man. Remember that.

MARTIN:          You’re telling me! This is scarier than my wedding day – all 3 of them! But hey, old man… you’re a fine picture of health – even though... you know… you had cancer. And beaten it. Shouldn’t make me feel better listening to someone else’s misfortune, you know but… well (chuckles)… you’re a real man grandpa…you’re doing grand…two balls or none eh?