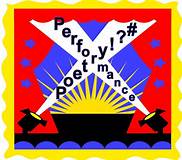 This week, we were looking at performance poetry - poems which are crafted to be performed, working particularly with sound, as well as visual imagery/word play.

To start us off thinking about sound, both workshops began with a rhyming challenge - the young writers were given a series of short lines, all inspired by autumn (e.g. Leaves start to fall, Days shrink smaller, Birds fly south, Breeze smells of bonfire), and encouraged to come up with rhymes for as many as they could! We also discussed half-rhyme (words which end in the same/similar sound, but not making an exact rhyme - e.g. bonfire/run higher, folds/fields, cushions/listen, etc) and the young writers were encouraged to experiment with these too!

Here are some examples from Sam:

Trees are bare, and I feel icy glitter in the air, so child, don't despair, it might not feel fair, but a nice warm coat to wear, will let you know I care.
The morning air is cold, and as my arms fold, the fire burning is old, and my story is already told.

After sharing, (some had turned into complete poems in themselves, which was amazing to hear!), the young writers then had a second, sound-based challenge - this time based on alliteration (putting together words which start with the same letter/sound in a phrase/sentence). This challenge encouraged EXCESSIVE use of alliteration - the writers were given 1 minute, and 1 letter, and encouraged to write a sentence or two using as much alliteration as they could! After giving them a couple of examples (Loose leaves lie limp and listless, lustrous, lit by liquid
light/Cats coil up on comfy cushions, curled up close to cosy
humans ) - the challenge began!

Here are some brilliant examples from the 11-14 group:

Next, we watched and listened to some examples of performance poetry. These included videos from Barbican Young Poets, showing young poets of a similar age to our young writers performing their poetry - Zahrah Sheikh performing 'Them Us', Amina Jama performing 'The House at the End of the Street', and Katie Hale performing 'Honey'. We talked about how they used sound in their poems - alliteration, rhyme, repetition, similar sounds within words - Katie Hale's whole poem is picking apart the sounds of the word 'Honey' and the images they create!

We then also listened to the opening of Dylan Thomas' 'Play for Voices', Under Milk Wood - again, looking out for techniques he used to create a picture through sound.

Finally, putting all this together, the young writers wrote their own performance poems, on any topic. Some expanded on their earlier, autumn-themed writing for the challenges, some returned to the character of Scheherazade; others came up with original themes of their own. The challenge was to try to think about sound, and use some combination of either repetition, rhyme, half-rhyme, alliteration, or all four!

Leaves turn orange,
Leaves that you can hold,
Leaves age slowly,
Leaves can twist and fold.

Sparkiling stars glitter in the void of space, sparkling, snaking, silly, stupidly sparkly stars. The stars are not to be wished upon, they are too silly to make wishes that were wished too long ago to be wondered. – Jasmine

A boy, spinning on a chair, the world speeding, blurring, speeding, blurring. Round and round the chair goes, creaking, groaning , bearing his weight. Objects become colours, vision becomes the drink of the gods, but the boy is not thirsty. A boy, his dreams and ambitions, his past and his future merging into one. The boy ends where the chair starts, the chair ends where the boy starts. They are one, an endless being of infinite rotation. A boy spinning on a chair, existing in a world of pure joy, a world in which stillness is a crime, a world in which happiness is determined by speed and speed is determined by happiness. Slowly the chair slows, and the boy disappears, for in the end that is all he existed for. - Luca

A word that means nothing, such is the evil

So such is its evil.

A word that resides outside of the dictionary,

Is such a eucatastrophe, if you understand me,

For it lacks common use.

A word in a world of warding winds, tiding changes

That toss and turn. Those tossed and turned are

Thusly spurned, but never for a reason of good,

Never for a reason of good.

The world has honed its eucatastrophe, falling

On the wailing waters, to diffuse into a domestic

Setting. The global scale has no clue how to register

The word, sitting in the corner. Hence lies the

Down a corridor of dark and destruction.

So why not hear our eucatastrophe? Let us report

All our pleasant surprises, recount our happy

Memory, and list all the ways that it went right.

So why stifle out eucatastrophe? Hear our voice,

And allow us our victory! We deem ourselves a failure,

Our fear is of ourselves, ignorance is no armour,

Lest you want more positivity sitting in the corner.

See you after the half term break!