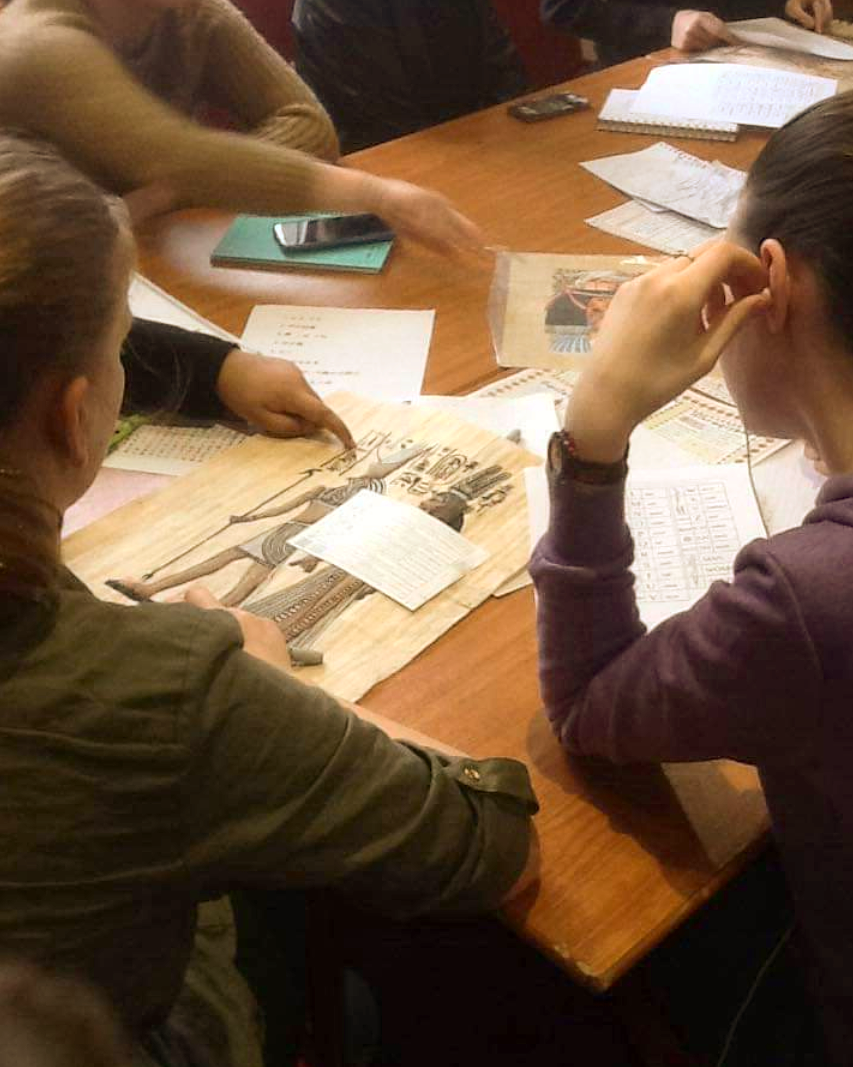 We began this week's session by thinking about what we already knew about the ancient Egyptians - their gods, pyramids, cats, sarcophagi, mummies, and hieroglyphs. The Young Writers then translated their names into hieroglyphics.

We thought about what Pharaohs took with them when they were buried in the pyramids, such as their pets, slaves, and treasures, and the Young Writers wrote a list of all the things they would put in a time capsule to tell people in 100 years about themselves. These included beds, baths, pets, cinemas, bowling alleys, buses, books, and pizza (stored in a mini-fridge). The Young Writers then compiled these into list poems, the first stanza in the voice of the Pharaoh, describing what they were bringing with them to the after-life and why, and the second stanza in their own voice, describing and explaining what they were putting in their time capsule. These are some examples we would like to share:

Before the great boy King Tutankhamun died, he regally requested:

All the money he had every made,
Wax servants to guide and aid him.
Cats to love and adore,
And a guide to show him the way.

He truly was a noble man.

When I, the slightly immature boy Tom die, I not-so regally request:

Literally every Elon Musk tweet of all time printed and laminated,
Quark the soundcloud rapper's original album (if he actually exists),
A Percy Jackson book - I really need to re-read them,
And a blanket, I don't know if death is tiring.

I'm not as noble as the boy King, but I'm trying, okay.

An Attack on Titan necklace,
To keep me free.
A Stein Gate badge,
To keep time in line with me.
A Totoro keychain,
So I'm not alone.
A Todoroku pillow,
For fire and for snow.
A real life Pusheen,
My many home-made posters,
My Japanese engravings
And my gothic black cat coasters.
Children's shoes and tiny clothes,
As my size remains the same.
And of course my copy of the award-winning manga, 'Your Name'.

The Young Writers were then handed a sheet of the first lines of classic novels translated into emojis, which they attempted to decode. They then made their own emoji combinations in teams of three, for the rest of the group to try and guess. We've posted these on our Twitter (https://twitter.com/SOYoungWriters) for you to try guessing, too!

Our second group of Young Writers began with the short emoji decoding exercise, and also wrote their names in hieroglyphics.

We then read some ancient Egyptian poetry translated from hieroglyphics before the Young Writers wrote their own pieces. Like the younger writers, these poems contrasted the voice of a Pharaoh with their own voice, but this time instructing a portrait artist on how to depict them to future viewers.

The writers then read some poems on self-portraits, and wrote their own obeying the following set of instructions:

Using this as a foundation, the Young Writers will work on this poem for next week's session.