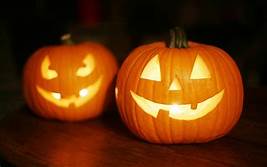 in our last session before half term (and Halloween!) we of course had to do some spooky writing!
We started by each sharing one spooky thing we associated with Halloween - from black cats to toffee apples, cobwebs and scary doorbells!
Next the young writers were challenged to include as many of these items as possible in a short Halloween story or poem.
Here's Neelesh's poem, which managed to cram in all of the Halloween items - and even rhyme as well!

The Dead Bodies
There were bloodcurdling dead bodies on Halloween night,
which gave me a terrible fright.
People have installed scary bells
and I've encountered Black Cats as well.
I think the culprit of this murder mystery who was wearing a hockey mask,
so, I wonder if I solve the mystery task
Happy Halloween all who may knock
from all who are watching around the clock.
Next, the young writers were challenged to write a scary story with the LEAST scary setting they could think of - like an ice cream parlour, a shopping centre, or a tropical island!
Here's the start of Neelesh's spooky story!
It was me and my four friends Tyler, Alister, Ben and Henry. Everything was going fine until something happened to us which I won’t tell you right now or there is no point for a story. So anyways, it was broad daylight and we travelled from all the way from England to Hawaii in a first-class plane. Something just wasn't right because why would Tyler’s friend pay for us $5000 for a holiday. It's not like we won a lottery or something. Don’t only think it's me at my four friends. My younger brother, Nick, was with us as well. Also, we were staying in a luxurious hotel as well, and it's right next to the beach. In the morning, me and Nick saw a query looking person wearing a cloak. Who would do that in a tropical island? However, it become creepy as he started to follow us. This is from when our story really starts.
PreviousNext