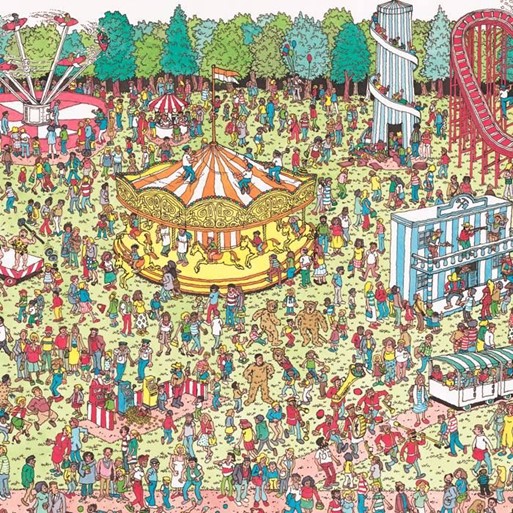 Next, everyone came up with something dramatic that could happen next at the fair, and put this in the chat. Suggestions varied from a scream from the woods behind the fairground, to a rollercoaster stopping mid-ride, a portal to another world hidden in the helter-skelter, and a fairground-wide game of wink murder!

Choosing either their own dramatic event, or someone else's, the young writers then used this as a starting point for a monologue from the point of view of their character...

Here is Neelesh's monologue, looking back from 18 years after the event at the fair...

It was a mid-summers day, about 18 years ago when I was 15 years old. In broad daylight, me and my family went to the funfair. My younger brother was frustrating me because he wanted to go onto some rubbish rides, and I am not wasting my money for those things. Some of the rides which I went with petrifying and awesome as well. From here, this is where my thrilling adventure starts. While I was on one of the rides. I saw a glimpse of flashlight which discombobulated me. As far as I thought it came from the spine-chilling forest. I kept thinking. Someone needs help. What happened to the person? Is he OK, or dead by now?

All these thoughts bubbled in my head.; these ideas made me even more excited. I wanted to detect what was going on these peculiar woods When I entered there, it felt as if the blood curdling trees were about to grab me. In the distance as well, luminous light which looked rather like it, was a torture, something I glanced a bit and I realized there was. It was a quaint fellow wearing a suit; scruffy hair; a long beard and a weapon!

It's really freaked me out, but I don't want to be a wimp as I thought. My heart was pounding; I figured out an idea that will help me a lot, or if I didn't. I would be a dead teenager. When the guy was nubani, I crouched cautiously and went to where the person was standing. And to my horror I nearly fainted. There was a dead man lying across the weathered grass. This was a murder. I couldn't believe it!

Guinevere decided, on the very moment that irritating child reached the apex of the helter skelter and started screaming incoherently, that she was not coming back. Just because she wanted to spend time with her granddaughter, just because she was acutely aware that her life was not infinite and that every second spent with her family was precious, just because she was tired with listening to Bradley Walsh witter on and on, did not mean that she had to wander around a faire masquerading to be the famous Scarborough Faire in the hopes of attracting tourists. Tourists with evidently acrophobic and painfully vocal children.

“Aren’t you enjoying it nan?” asked Jaclyn, the young woman’s arm comfortingly held against Guinevere’s own. Her granddaughter had grown into quite the young lady, against Guinevere’s (correct) judgment. Her parents had decided on a more ‘sophisticated upbringing’ as opposed to practicality, hence why, when Jaclyn had arrived to pick her grandmother up for their day our in shiny red shoes, ill-suited for running, the old lady had sighed dramatically. Her own shoes weren’t much better, mind you, which wasn’t to her taste, but apparently some doctor decided it best for walking boots to be outright banished from her wardrobe and these flimsy things replaced them, courtesy of her daughter, Jaclyn’s mother.

“No, I am not dear, not in the slightest. The only good part of this damned faire is you, and since I can take you elsewhere, I believe I should, and that we should leave.”

“Leave? But nan, we’ve barely looked around! Don’t you even want to look at the stalls?”

“Jaclyn, dearie,” Guinevere leant in close to her granddaughter’s ear, “frankly, the sounds of these children are driving me insane. The only instance I will be driven insane is if insane is a place and you are taking me there and away from here. Now, let’s get back to that car of yours and escape this hellhole.”

Her granddaughter raised a hand to her mouth in shock. “Nan, blasphemy!”

“Oh, sod the church, pastor Dylan is an adulterous thief and a wicked man, no god could make him and much less appoint him in a position of power. Come on darling, there are better things to be done.”

Jaclyn pursed her lips, until an idea flicked into her head and illuminated her eyes like lightbulbs. “Look, over there! They have a shooting range! You like that stuff, right?”

A disgruntled Guinevere turned reluctantly to look at the mock-western saloon, painted bright blue like the Texan sky, and watched overweight men in bad cowboy get-ups attempt to fire plastic caps into tin cans. A sorry imitation of sharpshooting, especially since the guns were made to be inaccurate, so that tourists would lose and try again. “No, not that stuff, I prefer proper shooting. You should come with me some time to the range down at Isling, you might like it.” Her granddaughter made a face.

“Me, guns? Not for this lady. I have an accounting job, accountants don’t shoot.”

Guinevere snorted. “Accountants don’t shoot? Young lady, I was an accountant at HSBC for 6 years in my younger years, and I went into work smelling of wood-chips and squirrel scat from my weekends and evenings at the coppice, accountants can and will shoot.” Jaclyn laughed.

“Quite sure.” Jaclyn looked, disappointed, at the swinging rollercoasters and the stumpy vendor carts, before starting to wander back towards the part of the field they called a car park.

It was at that exact moment that a murder was committed.

Guinevere first became aware of the incident at the loud bang. Then, the screaming. Then, the frantic tugging on her arms by a distressed Jaclyn. Finally, by her own turning of her head and seeing the body for herself. It was only a few yards away, a young man with ashen hair and bone-white skin, a pool of crimson loss spreading into the depressed grass. Guinevere knelt down next to the man, straightening his jacket like she had so many times before. She thought back to her first case, when she was 67, offering her services as an amateur investigator to the police for free, and she started the exact same way. That man was dark-skinned, older and larger, but his blood was just as sorrowful. His family was wailing in the porch outside. He was done with his wailing for good. She remembered finding his killer, tracking him down in merely 2 weeks, after all, this was her dream. He was brought into custody in front of her irrefutable evidence, and was taken away. Thanks to her. She was the expert. She was the professional they went with for her second case, a young woman in an artist’s suit. Her blood was red with sorrow. Guinevere closed her eyes. Her family was wailing in the hallway. Always closed the eyes, straightened the clothes. Always a family to miss them. This time, again. Again. There would be justice.

Guinevere closed the young man’s mouth, agape, shocked at his quick demise. She shut his childish green eyes, dull like leaves, and placed his long hands over one another on his stomach. She rose from kneeling, and turned to face her granddaughter, who, shocked, ran over and grabbed at her grandmother’s arms.

“Leave? Why would I want to leave? Things just got interesting.”